Protests continue on Wall Street and around the nation calling for a vague program of reform.  Polls continue to show that the effort is popular, with opinion against Big Government even stronger than feeling against Big Business.  It seems that after many years we are beginning to develop the courage to make small plans once again.

At the heart of it all is 30 years of an applied theory, a history that appears to be discredited but never been properly repudiated.  As we move past the dogma of Supply-Side economics there is a lot more than government taxing and spending policy to clean up.  There are the banks whose turf is being occupied today, those that are beyond Too Big to Fail and well into Too Big to Understand and simply Too Big.  They got that way the same way our government did – by leaving common sense and history behind.

It’s been 12 years since the big financial bubble was in the process of collapsing for the first time.  Wall Street had a fabulous ride through the 1990s from “high tech” stocks that were largely retail outlets and services making use of the new connections promised by the internet and dramatic improvements in shipping.  The mania simply got ahead of itself, and by 1999 was clearly taking a bit of a pause.  That worried those who assumed the bubble was a desirable thing that should continue on forever.

The single guiding principle – supply side theory – told policy makers that if there was more investment money available the wonderful gains could continue forever.  This time it wasn’t a matter of tax or spending policy, but keeping the party going on Wall Street.  Freeing up banks, the argument went, would make even more money available for investment in the fabulous engine that created more and more wealth all the time.

Only one thing stood in the way.  Since 1933 it was illegal for ordinary banks, those that took deposits and made loans, to invest in securities like stocks.  Banks had to contend themselves with making loans to people and businesses with the money they made off of the interest from other loans.

That law was known as the Glass-Steagall Act, named after its two sponsors.

When it was passed in 1933, the separation of investment and ordinary banking was apparently obvious enough to not be controversial.  The Great Depression was well under way and the failure of banks propelled through every Main Street in the USofA as a general failure of everything.  A wall separating the two was simply a foregone conclusion – although other provisions of the act, such as deposit insurance (FDIC) took a lot more convincing.

Not so in 1999.  By then, the separation seemed antique and a serious impediment to perpetual wealth.  It was quietly repealed and then …  something very big happened.  Take a look at this chart that has been circulating around the ‘net (so I cannot give proper attribution!) showing the timelines for the creation of the largest banks – those that are truly “Too Big to Fail”: 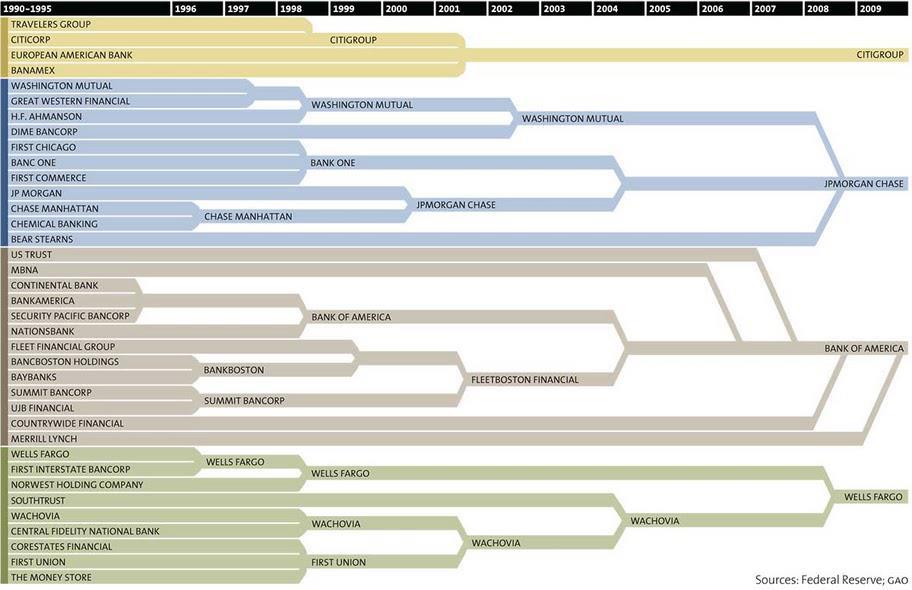 Note that 1999 is the big turning point, the spot on the chart when many become one in quick succession.  Removing the wall between ordinary banking and investment banking created a grab for small banks and other institutions that had good cash flow – money in and out that could be leveraged into short-term borrowing that in turn was put into the stock market, derivatives, other complex investment instruments.

It was only a short step from the merger mania to the channeling of mortgages – the mainstay of many ordinary banks – into mortgage backed securities.  These are bonds with big cash flow behind them backed by ever-rising real estate that … well, we all know how this turned out.  Removing the separation between ordinary banks and investment banks fueled the mania that kept the party going right up until 2008, despite the fact that the rest of the economy was clearly in trouble from at least 2001.

There has been a call recently to re-instate this separation, and Glass-Steagall is being talked about more openly than it probably ever has.  Where its initial passage was not controversial, and its repeal also a forgone conclusion, it is now up for debate.  A bill to do this has not gotten far, languishing in the US House.

What are the demands of those who are fighting Too Big in many forms?  One of them must be to re-establish the provisions of Glass-Steagall – the wall between ordinary banks and investment banks.  Expect to hear a lot more about this in the near future as the excessive belief in supply-side theory – more money for investment is always good – is finally repudiated as the true origin of the massive credit bubble we’ve all experienced.