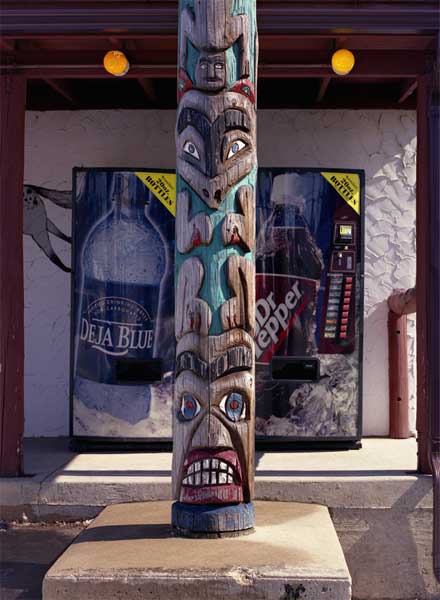 The images are well known: totem poles, tomahawks and feathered headdresses are symbols we associate with American Indian culture and, more disturbing, with the essential identity of American Indians. But these are mainstream America’s images of Native Americans, and the photographs of Tom Jones, currently exhibited at All My Relations Gallery in Minneapolis, ask tough questions about whose notion of Native identity they represent.

This is the first Minneapolis show for Jones, an Assistant Professor of Photography at the University of Wisconsin-Madison and a member of the Ho-Chunk Nation of Wisconsin. The exhibit, “Indian First: Identity, Appropriation and Reclamation,” is part of his ongoing artistic work dealing with Native identity, both historical and contemporary.

A friend once said to Jones, “Your work draws me in with its beauty and then slaps me in my face.” This succinctly describes the impact Jones’ work has on viewers. His images at first seem innocently seductive—a bottle of Dr. Pepper is hardly an item that disturbs. But when placed next to the image of a totem pole, as in “Soda Totem,” the entire meaning of that particular commodity changes. The context shifts to the relationship between the cultures represented by these items, and the gates of history, memory and narrative open. Jones’ images jar the viewer with their “inconvenient truth” about power, identity, consumerism and the degrading effect the market has on culture.

The exhibit comprises two series of Jones’ photographs. The first series, “I am an Indian First and an Artist Second,” looks at Indian self-representation and the struggle for identity among Native American artists. This series, according to the artist’s statement, “…is drawn from a current controversy in contemporary American Indian art that positions artists that claim their Native ancestry against those that prefer to minimize or even deny their Native heritage. This debate has come to be known as the ‘post-Indian’ issue…. This series addresses the tensions and multiplicity of identity referents currently at play in the context of our perceived ‘post-race’ country.”

For this series, Jones photographed the underside of colorful plastic toy Indians and canoes that he had arranged in abstract formations. We can only see the base of these toys, many of which are stamped “made in China,” and from a distance they look like enchanting abstract designs. But if we look closer, we catch a glimpse of rifles and spears projecting from the images, indicating that there are figures on the other side of those bases that are fighting with one another.

They are fighting about identity, but from an outsider’s vantage point—distorted by history and muddied by Hollywood stereotypes—we cannot appreciate the intricacies of the battle. As Jones notes, the abstract arrangements are “a metaphor for what I perceive as a form of identity genocide.” Part of the struggle around identity is being waged by Native American artists within their own communities, prompting Jones to ask, “Why do American Indian artists both claim Native ancestry (by utilizing Indian symbols or entering shows specifically geared towards Indian artists) and simultaneously reject classification as American Indian artists?”

“Native Commodity,” the second series in the exhibit, looks at identity from another angle, specifically, how mainstream American culture, after reducing Native identity to a short list of symbols, appropriates those symbols to sell everything from whirlpools to gifts to hotel rooms. In a group of photos taken in the Wisconsin Dells, Jones uses juxtaposition to point out the cheap commercialization of Native American culture by mainstream America: “The End of the Trail” contrasts a tired, lonely American Indian on horseback alongside a strip of Visa, Master Card, Discover and American Express credit card ads; “Room #2” shows a  number two pasted on the silhouette of an chief’s headdress to mark a hotel door; and “Chippewa” features another headdress image atop the Chippewa motel’s sign, complete with tomahawk.

The tourist industry was instrumental in creating a certain image of Native Americans even as it destroyed any authentic notion of Native people. In the 1800s, the Ho Chunk people were indigenous to the Wisconsin Dells area. Jones explains how photographer H. H. Bennett opened the door to the Dells’ tourist industry,  leading to the commodification of Native culture as tourists sought traditional objects for souvenirs.

Jones states that the Dells imported “pueblos from the Southwest, totem poles from the Northwest, along with teepees and drawing from the Plains,” gradually merging all Indian identities into one commercialized “Indian” product. Bennett’s photography studio included a tourist information center and gift shop, selling Native souvenirs and crafts to tourists. In “H. H. Bennett’s Legacy,” Jones captures the image of Bennett’s studio, now, ironically, a historical museum, next to the still-functioning gift shop, which touts an Indian brave with headdress and bow standing over a neon “gifts” sign.

This is an exhibit that will appeal to all—Native and non-Native. The lessons Jones’ photographs teach us can be applied to other peoples, other cultures, other eras. They are timeless lessons of power, greed and exploitation. Above all, however, they are lessons of resistance and, as the exhibit title affirms, of reclamation.

This exhibit is free and open to the public, and will run through January 26, 2013. All My Relations Gallery regularly presents exhibits of contemporary American Indian fine art. For more information, contact the gallery’s website.

All My Relations Gallery