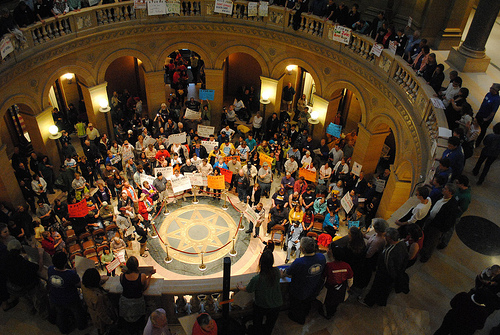 On Saturday, May 21st, more than 1000 people braved the rain to make their voices heard at the capital. The groups were organized from the Neighborhoods Organizing for Change (NOC), which provides services for the needy that ACORN used to. Labor groups like SEIU, and AFSCME, and education supporters were there too. Of course there was also a large contingent of those who support equality. There were a few, very few, who were there to support the Minnesota Discrimination Amendment. It was truly a coalition of the marginalized, disenfranchised, and brutalized. What they said was, “We’re not going to take it anymore.” Most importantly, they said, “Today is just the start.”

And what a beautiful start it was.

I do not have the reporter chops yet to give you the straight up 5 w’s. I’m still navigating this citizen journal thing. If you want fabulous details, and an in depth look at how Saturday went, places like the Uptake have what you need.

I would like to share with you a perspective they don’t have. The perspective of Dad. You see, I have felt the anger, and more often sadness at what is happening to our citizens. I wanted to attend the rally, and even some of the actions afterward, but I had my four year old son and six year old daughter with me. I was not really sure they were up for a three hour affair, especially going through lunch when the low blood sugar monsters can come out.

For all the anger, rage, sadness, and frustration evident at the rally, there was just a wave of love that came over my kids and the capital. They were enthralled by the chanting and passion. There was anger, but it wasn’t anger against the hated other. It was anger that our own brothers and sisters were hurting. It wasn’t an anger about us getting ours, or not wanting “them” to get theirs. It was an anger, not in our own name, but in the name of our neighbor.

I had no intention of dragging my kids to the day of action activities afterward, but my son was very jazzed up about his first school bus ride. So, in the pouring rain, we loaded onto the bus and headed to the Minneapolis club.

For a first day in action to come, it was pretty impressive. The weather was horrendous, but the buses were full. Our bus captain, a fiery young lady from the SEIU, explained why we were going to the Minneapolis Club. It was quite an education for my two young children and they listened intently.  I did get a little nervous when our guide discussed how we wouldn’t be getting arrested. I sure hoped not.

Our bus got there and we marched to the Minneapolis Club. These were forceful, assertive, and eminently loving demonstrations. Hopefully, next time there will be more families. It was so positive and a great way to spend time with the family. The kids did not complain once about being cold or hungry, and believe me that is not normal.

I’d like to leave you with a few pictures. One picture is of a movement that is just beginning. My daughter is standing in the rain, ringing the bell to speak with the folks at the Minneapolis Club. The other picture, is of a gorgeous day in South Carolina at a rally held by one of our countries rock star governors. Today is just the start. Anger burns like a passionate flame. Love endures and smolders on. One flame is burning out while one flame is burning on. For us, today was just the start. 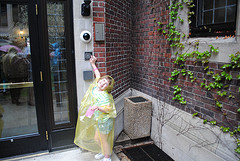 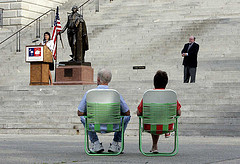 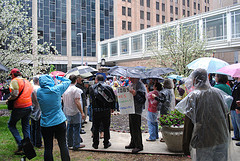 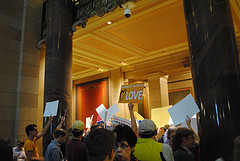