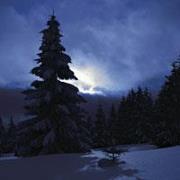 Perusing the program before the opening of Today Heaven Sings—Magnum Chorum’s Christmas concert—I noticed that nearly half of the selections were written or arranged by one of two former St. Olaf Choir directors, Kenneth Jennings and F. Melius Christiansen. I didn’t expect a great diversity of sounds. But throughout the concert, I was pleasantly surprised to hear the 50-voice chamber choir celebrate the season with an eclectic and varied selection of music. Some pieces weren’t quite to my taste, but I found the adventuresome spirit refreshing.

From ancient Latin texts, to traditional carols, to modern arrangements of old standards, to a lovely composition by director Dr. Christopher Aspaas himself, the choir kept us on our toes. A particularly fun piece, influenced by both Gregorian chant and jazz, according to Aspaas, was Pierre Villette’s “Hymne a la Vierge.” And despite my skepticism about all the Jennings and Christiansen pieces, I was happy to hear Christiansen’s extraordinary arrangement of Joachim Neander’s hymn “Praise to the Lord.” Being very familiar with this arrangement, I had high expectations, and Magnum Chorum did not disappoint.

A few pieces bordered on chaotic, with wide vocal ranges, divergent parts, and quick tempos. While these were exciting in their way, the choir performed best on simple, quiet melodies, such as Brent Pierce’s “How Still He Lies” and Jan Sandstrom’s haunting arrangement of “Lo, How a Rose E’er Blooming” by Michael Praetorius. Tunes such as these showcased the choir’s strengths: rich, warm tones and, at times, the ability to make an entire section sound like one voice.

My primary complaint is that the two-hour run time felt long for a concert featuring only one ensemble. But if you’re looking for a choir with an excellent sound that offers something more than the same tired choral standards, Magnum Chorum presents itself as a fine option.