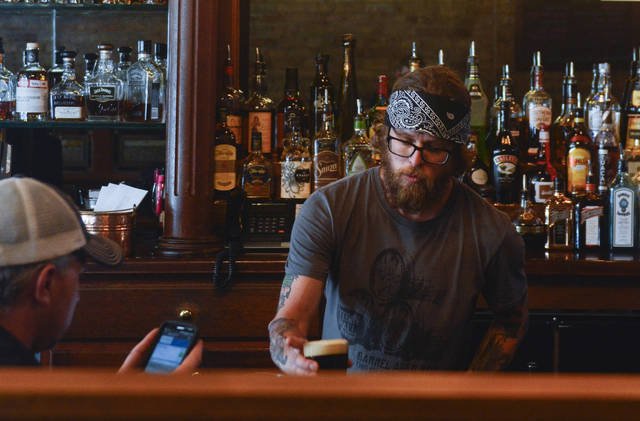 Patrick Moen gives a drink to a customer at Minneapolis Town Hall Brewery on July 7, 2014. Moen is one of many servers whose wages could be capped at $8 an hour if advocates successfully push for a tipped employee tier next session. (Photo by Samuel Harper)

Though Minnesota lawmakers recently raised the state’s minimum wage to $9.50 an hour by 2016, servers and other tipped employees can expect to see a push to lock in their wages at a lower hourly rate.

The Minnesota Restaurant Association is planning to advocate for the addition of a “tipped employee tier” to the state’s wage laws, said the organization’s executive vice president, Dan McElroy. The tier would set hourly pay for servers and other tipped workers at $8 for those who make $12 or more per hour through combined wages and gratuity.

Some say a sweeping raise in minimum wage will hurt the service industry, especially restaurants. Rep. Bob Gunther, R-Fairmont, began work on legislation in 2013 to keep Minnesota’s minimum wage at the national rate of $7.25, as long as tips bring total average hourly pay up to $12.

“Servers are very hardworking people, and they deserve a good salary,” Gunther said, “but you have to consider tips as a part of that salary.”

But Kayla Simon, a 2013 University of Minnesota graduate who currently works as a waitress at Uptown Tavern, said she doesn’t support a tipped employee tier.

“Working on a patio, you know, you have to depend on the weather. If it’s crappy out, no one is going to come,” she said. “Tips [vary] day by day — it’s not like a guaranteed amount.”

In 19 states, servers are paid as little as the federal tipped minimum wage of $2.13 an hour, plus a “tip credit” that boosts pay to regular minimum wage. Minnesota is one of seven states that require employers to pay workers full minimum wage before gratuity.

A tipped employee tier would be a compromise between traditional tip credit and Minnesota’s recent change in state law, McElroy said.

In the Twin Cities metro area, tipped workers earned about $22 an hour on average, with tips, according to a 2012 MNRA survey of more than 100 restaurants.

A wage increase for them, McElroy said, would take away money that could be spent on other job positions, like prep cooks, who won’t be getting major pay raises from the state’s new minimum wage law.

“It’s a little frustrating to see the highest-earning employees be the only ones getting a raise from this change,” McElroy said.

Throughout the country, he said, higher minimum wage has altered restaurant jobs. In certain cases, he said, some sit-down restaurants have converted to counter-style or automated services methods.

“It would be a shame to lose table service in Minnesota,” he said.

But Sen. Jeff Hayden, DFL-Minneapolis, who authored the Senate minimum wage bill, said he doesn’t think the re-conception of restaurants is tied to labor costs.

“Innovation and automation is in every business market,” Hayden said. “People who really want to go [to restaurants] go because they want the experience — of not only the food, but also the service.”

Although it’s beneficial to provide hardworking employees a “decent living,” said Pete Rifakes, owner of the Minneapolis Town Hall Brewery on the West Bank, hikes in restaurant costs are usually covered by jumps in menu prices.

“We have to pass some of those costs on to customers,” Rifakes said. “It hits both us and it hits our customers.”

The Minnesota Restaurant Association has begun grassroots work to garner public support around the issue, meeting with lawmakers and holding town halls. But it’s holding off on crafting any specific legislation for the 2015 session, McElroy said.

He said that with many House positions up for grabs in this November’s election, it’s too early to tell how minimum wage discussion will play out, but he said he feels it’s necessary to revisit the matter.

“It’s too early to tell. We want to talk to people over the course of the summer,” McElroy said.

Hayden said proposals for a tipped employee tier during the past legislative session didn’t receive much support.

He said he doesn’t think there’s enough time between August, when the first phase of Minnesota’s minimum wage increase takes effect, and the start of the next legislative session to judge the new law’s effects.

“The industry is booming in Minnesota, and people will want to see data and evidence that this is causing harm,” Hayden said. “I think we have a strong sense that restaurants will adjust.”

Despite reports earlier this summer that Gov. Mark Dayton said he would reconsider the pay raise for tipped servers, the governor’s press secretary, Matt Swenson, said Dayton has no plans to do so.

“He does not support a tip penalty, and he does not advocate any changes to the law at this time,” Swenson said.