If you’re like most people, the upcoming week will start a little bleary from losing an hour of sleep to Daylight Savings Time. It’s an uneven process, too, with Europe not changing until 30 March this year – meaning that there’s now only 6 hours difference between St Paul and Frankfurt instead of the usual 7. Schedule your skype conferences appropriately!

All this messing with the clocks only proves how artificial the whole idea of time is. Perhaps we’re better off with one time across the globe.

Time, of course, existed long before little humans were able to keep track of it. Tempus Fugit after all, time flies, which is an excellent idea I have for a coffeehouse/bar if anyone is interested. But for this week when it’s hard to drag yourself out of bed there’s another tale to tell about how we got to this point – and what we might do about it.

Our story starts not with the conquest of time but with the need to bottle time up just enough that we could conquer our planet. If you are on a ship at sea, determining your latitude or distance from the equator is a snap – all you have to do is measure how far a bright star (even the sun) is up from the horizon and look up what day it is on a calendar. A little math later and a sharp sea captain knows just where he is.

The hard part is longitude, or how far east to west you are. Since the Earth rotates, any measurement depends not on the day of the year but on the time of day. If you can figure out noon, when the sun is at its highest point, you still have to know how far away that is from a fixed point. One way to do that is by knowing when it’s noon somewhere else and the net difference between your local time and the known time.

The first universal clock that could be seen anywhere came from the orbits of the moons of Jupiter, which dance in perfect time. From standard tables you could use their position to look up what time it must be where the tables were written, and you knew a standard noon. The only problem is that these weensy dots are nearly impossible to see on a rolling ship at sea.

The Royal Observatory of Greenwich offered a prize for the first clock that could keep time on a moving ship, which is to say clock that wasn’t based on a moving pendulum. In 1773 John Harrison collected the prize and soon every ship knew when it was noon in Greenwich, near London, and the Royal Navy could eagerly map everything. Naturally, some of their plans were spoiled in 1776 by a bunch of rebels, but we don’t need to get into that.

This gave us Greenwich Mean Time, the standard around the world, to map out every inch of our planet. Soon, the sun never set on the British Empire, which goes to show that even God doesn’t trust an Englishman in the dark (thanks, Dave Allen!).

Standardizing time came to the continents for one simple reason – everything else was a big pain. There was a 7 minute difference in time between Saint Paul and Minneapolis, for example, which wasn’t a problem until railroads connected us together. If a train left at 12:05, was that Minneapolis or Saint Paul time? It was all standardized into time zones, four across the continent, on 18 November 1883 and that was that. A few years passed and the whole world was divided into standard time zones, 24 of them East to West. 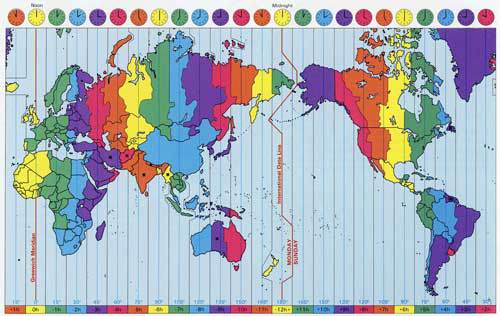 It gets a little funky in places, but they’re mostly even.

Today, many of us work with people around the world in different time zones. It’s especially silly with Daylight Savings Time, given that nations switch on different days and equatorial people don’t bother to switch at all. South America, naturally, switches during their winter, six months off of ours. The net difference between Saint Paul and Buenos Aries, Argentina, varies from 2 to 4 hours depending on the day of the year – you just have to know when. Getting everyone on skype can be tricky if you don’t know how far off everyone is.

What can we do about it? I propose that there is only one time, which is the one that standardized it all. Greenwich Mean Time is now called “UTC”. In English, that’s Coordinated Universal Time and in French it’s Temps Universel Coordonné, so calling it “UTC” is a compromise. Typical European stuff. But it’s the one time that is accessible around the world as a standard.

If we were to follow that in Saint Paul, we’d be getting out of bed about 12:00 (6 AM) and get to work about 14:00. That may bother people, but it’s just a number. All the other strange machinations we do with our clocks are a way that we are kidding ourselves, creating confusion with our own BS. There is only one time, and it is UTC. You talk about it anywhere, and people know what you mean. Why not just put everything on that one time and not worry about the numbers that result?

After all, in the end time conquers us all – even if we don’t like to think about it. Tempus fugit!