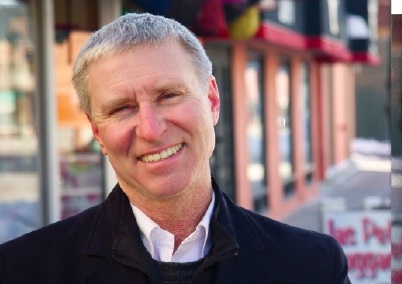 Ninth Ward Candidate Tim Springer: "Social equity issues along with climate change are the biggest challenges of our time.  The good news is that we can make meaningful progress by addressing them together with the right community approach to transportation, energy, housing, self expression opportunities, education and job training, and economic development." Photo by Paul Andre.

Tim Springer, a Minneapolis community leader from East Phillips, Powderhorn, and Central for the past 23 years, is running for Minneapolis City Council in Ward 9.  He is known for his leadership of the Midtown Greenway Coalition, where he played a major role in making the Greenway Minnesota’s busiest bikeway and a platform for urban revitalized and community connection. Tim’s accomplishments have not happened by accident.  He has led a life pursuing his values.  His perspectives and experience extend beyond the Greenway.  As Ninth Ward resident Janis Lane-Ewart says, “Tim has the rare combination of impassioned advocacy for challenging ideals like equality and sustainability, while at the same time bringing people together and actually getting something done.”

Most of you know Tim as the Executive Director of the Midtown Greenway Coalition, but some of you may not know that he co-founded the Coalition, starting as a volunteer in 1992.  As Executive Director since 1995, he led the Coalition to advocate for creation of the Greenway, now a national model for greenway and urban renewal. During his tenure, Tim tirelessly advocated for safe neighborhoods, friendly trail design and implementation, attractive land use and green space planning, neighborhood art, community partnerships, and neighborhood involvement. The Greenway helped Minneapolis to be named the number-one bicycling city in the nation by Bicycling Magazine in 2010.  Tim has worked with all levels of government including neighborhoods, and city, county, state, and federal officials. Toward the end of his tenure at the Coalition, Tim led the charge to defeat the proposed Xcel power line in the Midtown Corridor.  He partnered with the city and advocated for community interests in the creation of the Freewheel Midtown Bike Center.  After 19 years of service, Tim left the Coalition in 2011. He now works as a bicycle consultant specializing in design of urban greenways. He is currently part of a team designing twelve bikeways in Minneapolis and St. Paul.

Tim is a long-time resident of the Ninth Ward, renovating his East Phillips house on the Greenway 16 years ago.  In addition, he has purchased and improved several other houses in the neighborhood.  In 2008 he was recognized as Citizen of the Year in Ward 9 by Council Member Gary Schiff.

Tim is a year-around bicyclist. He has never owned a car except for a VW bug for 6 months in 1984 before, ironically, it caught fire and burned up.  His hobbies include cooking, downhill skiing, painting, drawing, and found object sculpture work.

Tim’s advocacy started early. Graduating from Colby College, Waterville, Maine in 1981 with a biology degree and pre-veterinary education, Tim loved dogs and animals. He came to realize, however, that his passion to preserve and improve the environment was most important for his career.  So he began studying renewable energy.

Tim’s first environmental job in 1984 measured wind speeds to catalogue Minnesota’s wind resources.  In 1988 he completed his Masters degree at the Energy Resources Group of the University of California Berkeley where he studied sustainability from the integrated perspectives of sociology, environment, economics, and technology. Graduates from the Berkeley’s Energy Resources Group have made remarkable accomplishments for the environment throughout the world.

Fresh out of graduate school, Tim worked as a recycling consultant, and conducted an environmental audit for a soap and bath products manufacturer to help reduce waste and improve worker conditions both in-house and in product packaging. From 1990 to 1995 he founded and operated his own consulting firm, Waste Reduction Research, to focus on reduced waste generation rates for cities, counties and states.  He became a national leader in waste reduction, going beyond recycling to decrease total discards.  He was a keynote speaker at a national recycling conference. Many of us here in the Minneapolis community knew of his impassioned advocacy for sustainability even back then.  Tim’s guiding principles have stayed with him today.

Tim has advocated for gay rights and racial diversity since coming out as a gay man in 1988.  In the early 1990’s, he was a board officer for the National Association of Black and White Men Together, a multi-cultural gay rights organization dedicated to training men to understand and change race relations.