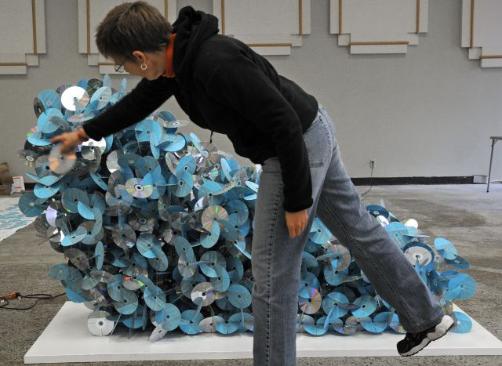 In Sept. 2010, Lucinda Naylor lost her position as artist-in-residence at the Basilica of St. Mary in downtown Minneapolis after she spoke out about Archbishop John Nienstedt’s plan to distribute 400,000 DVDs that argued against marriage equality for same-sex couples.

She urged Catholics to send her their DVDs so that she could make an art project out of them. TheColu.mn caught up with Lucinda, three and a half years after her protest against the Archdiocese, to see what she’s up to now and how the project affected her career.

How did the DVD to ART project and the fallout impact your career as an artist?

The DVD to ART project actually had very little impact on my career as an artist, with the obvious exception of losing my job at the Basilica. It was one of those 15 minutes of fame deals.

What made you decide to take on the project?

Taking on the project wasn’t really a conscious decision, in the sense that I sat down and gave a great deal of thought. I knew I needed to do something to counteract the Archbishop, and making his DVDs into a sculpture was the first thing that came to mind. I was like, “hey, free art materials” and a just cause…what’s not to like?

Did you know at the time that it might cause problems for your position at the Basilica?

I honestly didn’t give the Basilica much thought when I first conceived the DVD project. I was acting on my own and outside of the role that I had as artist-in-residence. I knew that pretty much everyone at the Basilica would agree with me, even if they were unwilling to say so publicly. So I blithely went ahead with my project without really thinking about the impact it would have on my career.

Of course the minute my project gained media attention and the question was put to me, about how the Basilica would react, I knew that I would end up out on my ear. It was a no-brainer that the pastor wouldn’t buck the Archbishop.

Unfortunately for the pastor, his decision to let me go, garnered my project more attention than it ever would’ve received otherwise.

I never had any regrets about losing my position by taking a stand in favor of love.

How do you think art (and perhaps your art specifically) can impact public discourse?

I think my art had a very positive impact in the Catholic community. Among Christians, Catholics have been polled as being the most supportive of gay marriage. But at the time, it seemed like everyone in the upper hierarchy of the church was obsessed with quelling gay rights. Our local archbishop had taken a particularly hostile tone not just to gay people, but to anyone who supported them. My project helped pro-gay Catholics see they were not alone and draw support from one another. I know this because people have told me so.

I hope it also helped non-Catholics in the GLBT community see that they have a lot of Catholic allies.

In general, I think art continues to be underutilized, and undervalued, as part of the public discourse. I love graffiti art, and installation art, which reworks our surroundings and make us see things anew. I love art that makes me laugh or challenges my imagination and staid ways of looking at things. And when that art is public, all the better. It’s hard to be part of the public discourse if you only put your artwork in galleries; so the challenge to artists is to get out there.

What projects are you currently working on that you want to tell our readers?

I am currently working on a graphic novel about the Camino de Santiago, which is a pilgrimage walk across Spain. I’ve been fortunate enough to have walked this route twice, and the stories from it are bubbling up in graphic novel form. It’s still early days, but I think this project will take up the better part of 2014.

Aside from that, I’m interested in pursuing sculptural commissions and particularly would like to design more unique labyrinths in the coming year.

Tell us something about your inspiration. What inspires you to create?

Inspiration is often like some little kid running at you with pointy scissors— you don’t necessarily expect it and it can stab you suddenly. That said, I find lots of inspiration in myths and legends; in archaeology and history; in decay and ruins; and in the works of other artists. Oh, and light, the interplay of light always inspires me.

Where can our readers find or purchase your work?

Eventually most of my religious artwork will be available for sale/reproduction at http://www.eyekons.com

TheColu.mn’s Spotlight on the Arts features artists and organizations that have had an impact on the arts in Minnesota. If you are an artist or arts organization and would like to be profiled in our Spotlight, simply fill out our introductory form.