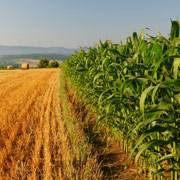 Aside from rural radio and newspapers, crop reports rarely grab major headlines. But with a severe drought gripping much of the nation’s breadbasket, everyone from journalists to grocery shoppers will be paying close attention to Monday’s U.S. Department of Agriculture weekly crop-weather report.

The typical, or average—if there is such a thing—Minnesotan is now three generations removed from the farm, but we are still connected to the farm economy in at least three ways.

Consumers will pay more for food the next one to three years as the drought’s impact works its way through the food chain. Yes, most Minnesota farm fields still look pretty good and should produce crops given periodic rainfall through the remainder of the year. But it is the total, drought-shriveling crop, not the local harvest that will drive up food prices.

Second, most of us are taxpayers. CNNMoney on Friday reported that the National Drought Mitigation Center at the University of Nebraska-Lincoln and the National Crop Insurance Services agency now estimate that crop insurance losses will exceed $20 billion this year. That amount is increasing daily.

The federal government pays about 60 cents on the dollar for crop insurance policies that protect farm income from crop failures like we are experiencing this year.

Third, in a food and agribusiness center like Minnesota, we have enormous exposure to the drought-stricken farm fields through economic ties that affect our urban jobs. Our major food companies (six Minnesota-based corporations are on the Fortune 500 list) depend on farm harvests at the base of the food chain. Grain handlers, processors, transportation companies and workers depend on providing services to the complex food chain as well. Less obvious, however, are agricultural service providers who will be affected.

Consider the huge AgriBank in downtown St. Paul. It is the largest agricultural mortgage and farm operating loan writer in the nation. While crops still might produce substantial farm income for bank client/co-op members in Minnesota, AgriBank has exposure to farm operations through the Midwest, including Missouri and Kentucky. Most of its lending territory is scorched.

Does a disaster crop mean problems for the bank? Not necessarily, if crop insurance keeps loans current. It’s more likely to impact farm borrowing and loan repayments down the road, similar to the job losses that have followed the Great Recession. The damage isn’t instantaneous.

As Minnesotans, with so many ag finance and services companies headquartered here, we need to worry about delayed reactions to what is becoming a national crisis.