My family is chock-full of military veterans, including myself, thus the word “VA” is a readily recognized acronym.

My first living memory of the VA Hospital was Fargo, 1946, where my Grandpa Bernard (Spanish-American War) had his leg removed (diabetes related). He was 74 then, which happens to be my present age…. In 1957, Grandpa lost the second leg, and died, at the same VA Hospital: age 85. He served his country. VA served him.

Later I had plenty of contact with the system between the early 1980s and 2007 (St. Cloud, Minneapolis, and Fargo again) when my brother-in-law was confined, first for mental illness (I don’t think that was military related, though he was an Army vet 1971-72, serving in Germany at time of Munich Olympics disaster); then hospitalized several times relating to major aneurysm surgeries. Especially given the severity of his disabilities, there was nothing to complain about. The system did its best, and its personnel were attentive. 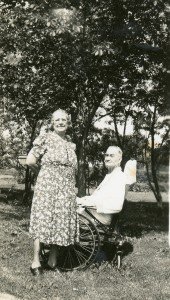 Left: Josephine and Henry Bernard at VA Hospital Fargo ND 1946 after amputation. I don’t think Grandma’s strategic position in front of Grandpa’s leg was a coincidence.

Of course, politics didn’t enter these earlier experiences. Now all there is about the system – is partisan politics: how to spin the crisis.

The VA is a huge, complex system dating back to 1930: an organization whose mission is care of veterans of military service, by people, and thus a place in which, at the micro level, it is 100% certain that flaws will be found, and then magnified. Of course, corrupt people don’t advertise their corruption: such is hard to uncover.

But politically, as now, heads can be made to roll: the big juicy target, the target the one farthest away from the specific examples of corruption. Here it is Eric Shinseke whose head rolled, but the real political target is President Obama (who, paradoxically, is not running for anything this year, but has been made the symbol of his political party in advance of the 2014 election….)

There are other factors, too: I am active in the local chapter of a group called Veterans for Peace and annually attend their Memorial Day observance. These days the stories told are less about horrible battles of WWII; more about homeless vets; vets whose demons of one sort or another control their life: substance abuse, etc.

Grandpa saw combat in the Philippines but to my knowledge he did not come home shell-shocked, mortally wounded psychologically.

Used to be, in the good old days of war, say the Civil War, that you were killed in combat, or badly physically wounded, with minimal access to treatment. It was simple to count “casualties” then in the man-to-man days: killed or (physically) wounded.

Enter the era of new war: Vietnam, Iraq, Afghanistan and their companions.

The number physically killed – at least on our “side” – has been greatly reduced, largely due to technology. Those physically injured are less likely to die, but the cost of surviving is great. We see and hear examples of this all of the time.

Civilians on the other “side” bear the brunt of the killing these days.

Here at home, the incidence of “walking wounded”, post traumatic stress disorder, PTSD, now rages due to multiple tours of duty in combat areas, and all the other reasons not necessary to recite here. These are people who may not have been physically wounded, but are all but totally destroyed mentally and emotionally. Pair all of these incidences of need for treatment which an easily documented reluctance by Congress to appropriate needed money to shore up the system, and the supposed scandals down-line at Phoenix and elsewhere pale in comparison.

The systemic problem we’re dealing with here, in my opinion, are a combination of our own casual attitude, as citizens, towards war; and Congress tendency to starve the VA system while playing politics with each and every situation.

We citizens aid and abet by our silence, or our unwillingness or disinterest to learn the facts.

In every system in which people are involved and there is a hierarchical structure, there is the potential for problems. This includes the biggest and most efficient of businesses. The desired alternative is to find the problems and fix them; not the oft-chosen political way, to find a scapegoat, and punish the entire system by firing the boss because of the sins of a few.

Sundays St. Paul Pioneer Press had a great column by Ruben Rosario on this topic. You can read it here.