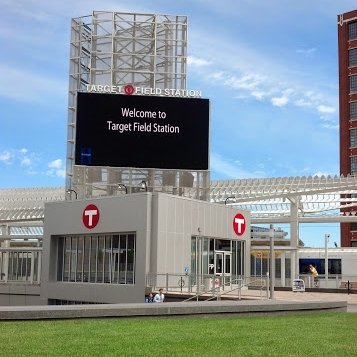 With the emerging debacle of The Yard prominent in the press (Strib and blogosphere), it is natural to overlook the fact that downtown Minneapolis just opened a brand new public space. It is called Target Field Station (formerly The Interchange), and despite Tom Fisher’s review on MinnPost, people actually use it and it is pretty nice. So considering downtown Minneapolis, with its skyway system, failed parks over the years, largely treeless sidewalks, and overall general inability to produce a good downtown park or public space, Target Field Station is a huge victory for the city. But let’s not get ahead of ourselves. Target Field Station shouldn’t win any awards (although it probably will) but we’ll take it because it does decidedly improve the public realm downtown. But the real litmus test of the success of Target Field Station will be how people use it over the years, so let’s capture an early snapshot.

Target Field Station is more than a train station. It is part park, part place to pass through, board and disembark from a train, attend a pregame event, or just sit. It achieves these things with varying success. Just northwest of the plaza on the north corner of Target Field is a lawn, large LED screen and of course light rail and commuter rail transit stations. Target Field Stations includes two light rail stations, Platform 1 and 2. This works well for Twins games, as one can clearly be used for the Green Line and the other Blue. This reduces confusion and makes riding the train much easier. 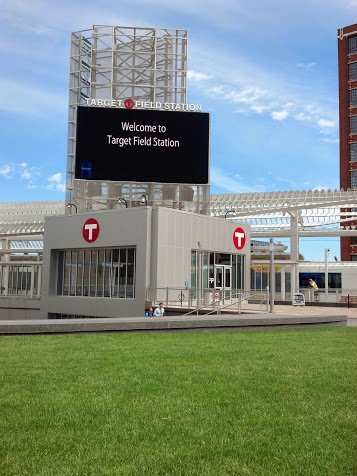 Looking across the lawn towards the HERC is a pleasant view. Have you ever seen a nicer setting for a garbage burner? 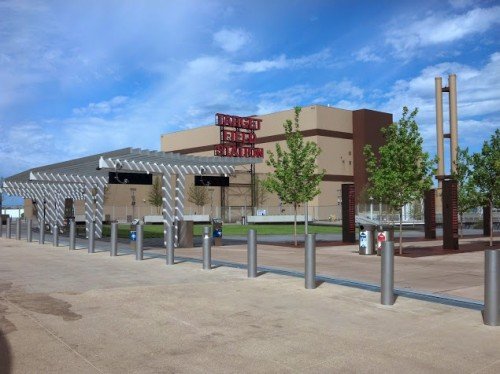 The lawn itself provides zero shade but is great for watching the big screen. Many, if not all, baseball games are shown on the screen, as were several World Cup games. The drawback is when no game is being shown, you have to sit and watch a combination of ads for Target and the Minnesota Twins – not exactly riveting viewing, and frankly a bit distracting on an otherwise pleasant day. 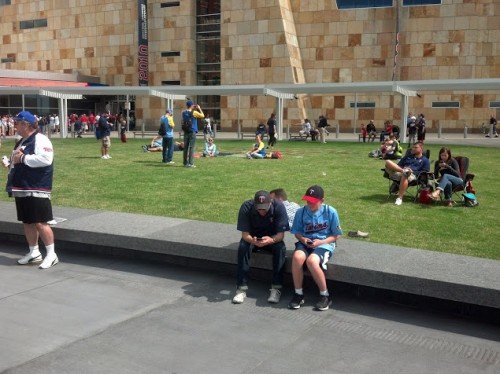 On an off day, benches under the trellises provide a natural place to sit. The trellises don’t provide much shade, however, so may not be too popular on hot days. 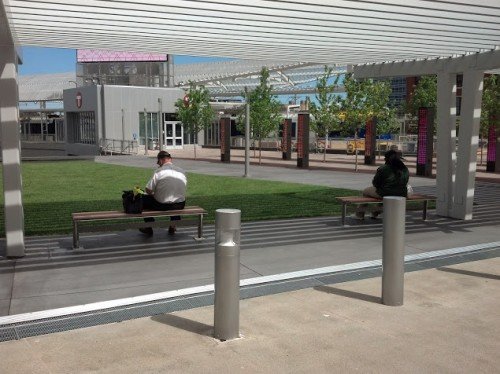 The other seating next to the lawn will be nice when the trees grow a bit more. However, given that they are in planters above a parking deck, I wonder how high these trees can grow. How nice to have a backrest – people seem to really appreciate that! 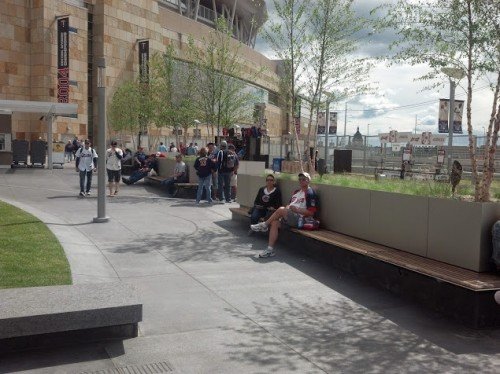 Addressing the elevation difference between Target Field and the train platforms above and 5th Street below is a challenge overcome by a large combination stairway/seating area. On a day I visited, a Kettlebells class was taking advantage of the stairs and circular route around the lawn for their workout. A nice use of public space, and I hope more than a Kettlebells class has discovered this. 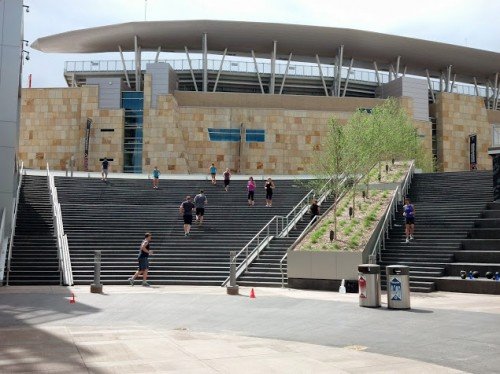 The curvilinear seating area is interesting, but perhaps a bit hit and miss. Whereas on a day I visited the bench-height seats seemed to get used quite a bit… 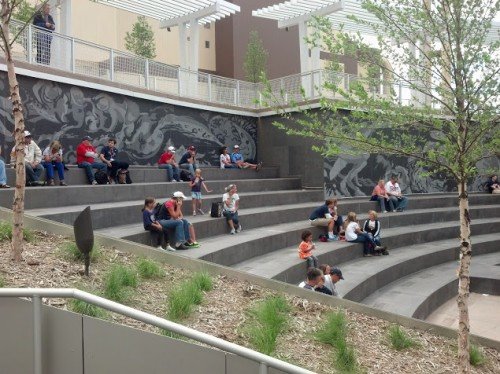 …at the very same moment the steps were vacant. I guess I thought the steps would also be used for seating, but maybe they aren’t as conducive, aren’t the right height or don’t offer any shade. 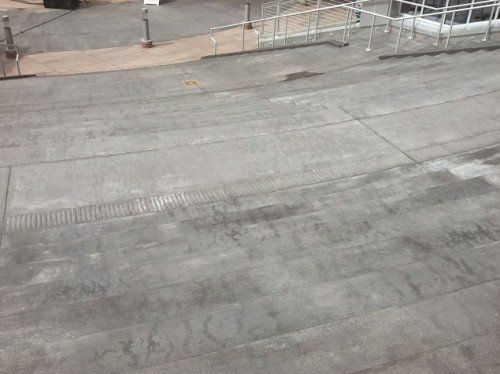 Those steps and seating face the underpass below the Green Line platform. This area serves many purposes. It is a shared space, and could be a very neat space at that, as it is part pedestrian path, part event area, part outdoor seating for Caribou, but also part car turnaround and part parking area and ramp entrance. I for one like the pedestrian/seating/event uses far more. The more events can that are held in this space, the better, including. On an everyday basis, Caribou should just take it over for shady outdoor seating. Cars be damned. 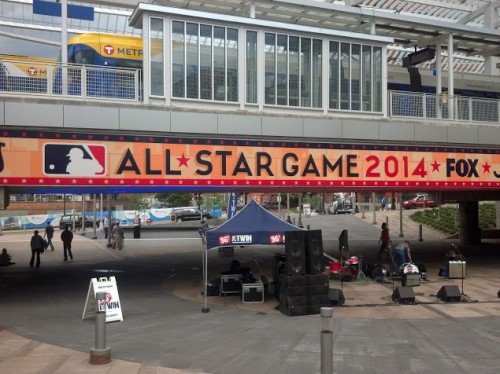 On game days, bollards pop up out of the pavement preventing cars from entering the underground ramp. That ramp has two entrances, so why cars are ever allowed in this space is beyond me. They should just always use the other entrance/exit. The bollards supposedly block traffic ongame days, but after the one Twins game I attended so far this year, the bollards were down, allowing cars to take over the space. Also, why should anyone be able to park their car closer to Caribou than the bicycle parking, much less do it for free? I don’t really get it. 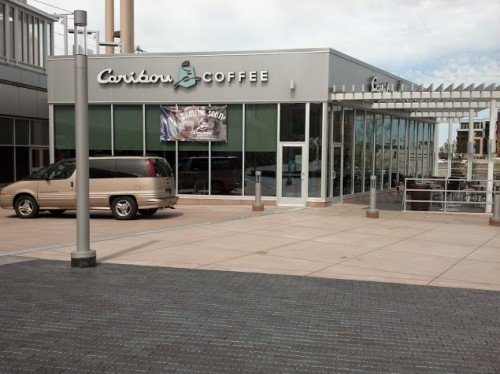 From the approach to the 5th Street crossing, the 5th Avenue sidewalk doesn’t line up with the pedestrian path on the other side. Maybe this is a minor quibble, but the drive lane does line up, and this kind of design flaw always drives me nuts, particularly in an area that purports to be so pedestrian friendly. While I’m at it, why is there even a signal here? The street is about 20 feet wide. A four-way stop sign would do, or just extend the shared space concept in to the intersection. A waste of $200,000 if you ask me. 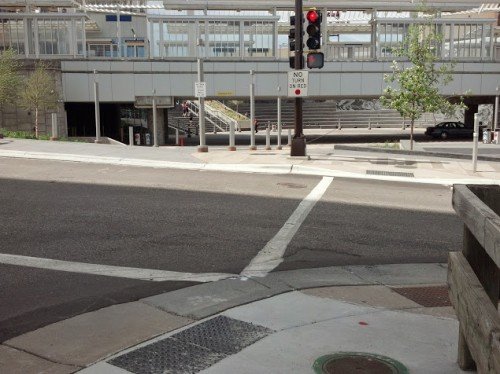 Overall, Target Field Station is good. It is a big improvement on what was there before, and it does give the light rail station more breathing room while adding public space. Is it necessary to build a public space at the terminus/transfer point between transit lines? Absolutely not, but it is very important to provide a walkable environment near that kind of location, and Target Field Station does so. It also provides a nice space for before and after games and for residents and workers coming to and from the North Loop. I won’t go out of my way to spend time here, but when I am in the area I certainly appreciate there is a place to sit and have a coffee.

Make no mistake, I like this space, as I do Target Plaza on the opposite side of the Stadium. I’m proud of how we’ve woven Target Field in to a tightly knit urban area crazy with infrastructure. Hennepin County and the Minnesota Twins have done a good job. But let’s not get too congratulatory. Target Field Station adds significantly to the public realm of downtown, but that isn’t saying much. We should look at it as the absolute bare minimum in the context of providing public space, pedestrian connections and transit stations in Minneapolis. Target Field Station helps Minneapolis not fall farther behind similar competitive cities but doesn’t help us get ahead. Just look at the Denver Union Station project as one example. That magnificent, sublime downtown park is still out there somewhere.