I’ve lived in Uptown for three years. In that time, I’ve had a lot to say about local issues and city politics, but I’ve said it all in my living room to my friends who know even less about local politics than I do. They nod or shrug depending on my tone of voice, and we move on because none of us really know what to do about it. It’s hard enough to stay informed about the national or state issues that everyone is talking about. City and neighborhood issues take some commitment to stay current. I have that commitment, but I have stayed firmly in my armchair while I sought out stories and opinions about local issues and elections. Until now.

This past week, I put aside the anxious I’m-not-welcome feeling that comes with being a newish, non-home-owning resident coming to the political table mostly occupied by older, longtime residents with homes that rival the size of my entire apartment building. I attended the DFL precinct caucus. For those who are new to politics (as I am), a precinct caucus is where the party chooses delegates to attend the ward convention, which is where the party decides endorsements. This is a pretty big deal since in Minneapolis, the candidate with the DFL endorsement usually wins. Or so they say.

Anyway, it sounded pretty simple. Elect some delegates, maybe get to know some neighbors, go home. Right? . . . right? Well, now I know. It was nowhere near simple. In fact, the complications escalated pretty quickly. Here’s the MinnPost write-up about it for more of the details. My take is a bit more personal thanks to my reading material of late. I am currently reading Jonathan Haidt’s book about the social psychology of politics and religion and just finished reading Chris Stedman’s book about his interfaith work bringing together theists and non-theists. My worldview has been thoroughly invaded by thoughts of civility between opposing (or seemingly opposing) groups and a renewed sense of optimism that cooperation is possible.

I spoke with people who live within a block or two of me who cite crime as this neighborhood’s big problem, which surprised me. I generally feel safe here even after dark, but it is interesting to know that not everyone does. That’s the perspective I was looking for when I showed up. But then the conversation then turned to that one gas station (you know the one) that they see as a haven of drug dealers and criminals. Now, I’m not going to say that nothing criminal has ever happened at that gas station. I know that isn’t true. But I do know that most of the people at that gas station aren’t criminals. That long-haired, tattooed, black-clad guy buying smokes? Not a criminal. He’s a local rocker on his way to play a show. He isn’t as scary as he looks.

Uptown is increasingly diverse–the Wedge especially. It’s a wild mix of large homes with residents who have families or older folks who have already raised their families and rentals occupied by all sorts of people who live here for its urban feel and proximity to night life. In this neighborhood, you can turn a corner and find a very different demographic. My demographics are a bit muddled. I’m a mom with a professional career, and my partner is a musician who plays shows at local bars. I can sort-of fit in with the moms at the park and the late night bar crowd, and I can tell you with confidence that both groups care about Uptown. We might disagree with each other on what the big issues are, but we are in this together. It’ll be a better place if we can accept and engage everyone. That’s the kind of leadership I’m looking for in our next city councilor in Ward 10. 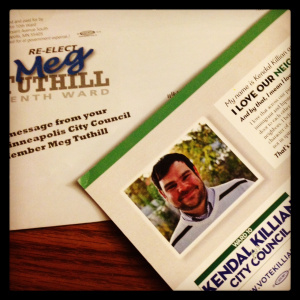 As I sneaked out of the caucus room before any decisions had been made to get home for my baby-sitter, I felt exhilarated that we had so many people who wanted to participate. We have a lot of people who care what happens here. I’m happy to be among that group.

Disclosure: This post contains affiliate links. A portion of purchases made from these links may benefit Proper Noun Blog. Thanks for your support. 🙂