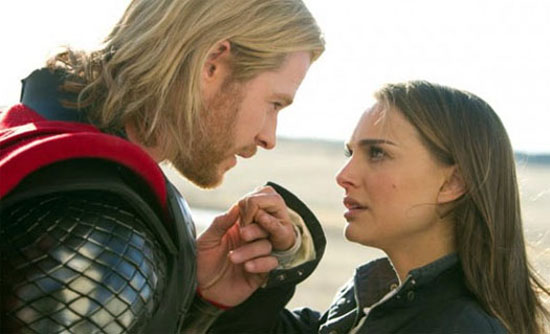 A good sign of what’s right with Thor, Kenneth Branagh’s take on comics’ most unapologetically Nordic superhero, comes in the form of a throwaway detail. A pair of black-suited agents are crouching on the roof of a building, holding sensors meant to track the cavalcade of extraterrestrials storming through a tiny desert town. As one agent watches Thor’s chest-plated allies tromp down the middle of the street, the agent sips from a giant convenience-store soda cup. Because, right? You’re sitting on the roof all day, someone’s gonna make a run to SuperAmerica. That kind of human detail comes across so well in this film that one only wishes there were more, well, humans in it.

Thor’s humanity, or lack thereof, is left a little ambiguous in the screenplay by Ashley Edward Miller, Jack Stentz, and Don Payne. Thor comes from another planet and is not strictly speaking a god (oh, those naïve Medieval peasants!), but when in possession of his hammer he can fly, summon lightning, and commit other feats of telekinesis. When his Earthling girlfriend quotes Arthur C. Clarke on the subject of magic and science, Thor smiles winningly and explains that he comes from a place where magic and science are one and the same. Point, set, match!

Thor’s realm of origin, Asgard, is a major setting for this film, as is its enemy territory where ice giants sulk icily, having been neutered by King Odin’s theft of the energon cube (to take a term from the Transformers cartoon, which hinged on a similar technology) that allowed them to be intergalactic badasses. Odin (Anthony Hopkins) puts his son Thor (an appealing Chris Hemsworth) on the time-out planet (Earth) after Thor leads a rash and provocative attack on the ice giants. The whole thing stresses Odin out and he has to take a long, magical nap—during which time his younger son Loki (Tim Hiddleston) takes the throne and predictably screws up. Meanwhile, Thor is canoodling with a mortally sexy astrophysicist (Natalie Portman) who foretold his coming via scientific sketches in her Moleskine.

At its best, Thor is reminiscent of two of the all-time great superhero movies, Richard Donner’s Superman (1978) and Superman II (1980, started by Donner and completed by Richard Lester). Those films combined genuine awe with empathetic characters and a winning attention to detail—remember the bro on rollerskates trying frantically to keep his balance while a very unchill battle raged overhead? At the preview screening I attended, Thor earned a lot of laughs with scenes like one where a collection of locals try their hands at extracting Thor’s hammer from the crater where it’s landed. Unfortunately, though, Thor never makes it to the big city—he’s too busy shuttling back and forth from Asgard, and he hurriedly evacuates the locals from the one town he does visit.

Portman is no Margot Kidder (“Can you get me some orange juice, Clark? Freshly squeezed”), but she reaches into her Garden State charm bag for some endearing giggling when faced with Hemsworth’s outrageously chiseled torso. I don’t know what kind of grant Portman got to fund a portable lab in an abandoned car dealership with a kewt research assistant (Kat Dennings) and a seemingly lovelorn advisor (Stellan Skarsgård), but I want one.

For the sequences set in Asgard, an art direction team led by Maya Shimoguchi take flights of fancy that would make Marlon Brando’s Jor-El green with envy, creating a flamboyant royal realm that lands on the pop-aesthetic map somewhere between Frederick Lord Leighton and Lisa Frank. Branagh’s virtual camera flies fluidly through the fantastic landscapes in sequences that are, if not exactly thrilling, certainly fun to watch.

But Branagh’s pedigree—once upon a time, he was the wunderkind whose Shakespeare adaptations earned comparisons to Welles—is most relevant for the task of lighting a fire under the royal drama. Palace intrigue is Thor‘s focus, to a fault: despite its sense of humor, this is a surprisingly autumnal film, with Odin’s death, and perhaps Thor’s, hanging darkly over the proceedings. The villain (whose identity I will not reveal, but as my dad would say, you get three guesses and two don’t count) can’t even glory in being evil—he’s got psychological issues to deal with, and not the kind of psychological issues that are entertaining. Though the movie runs nearly two hours, you still feel it’s forgotten to have enough fun before it ends.