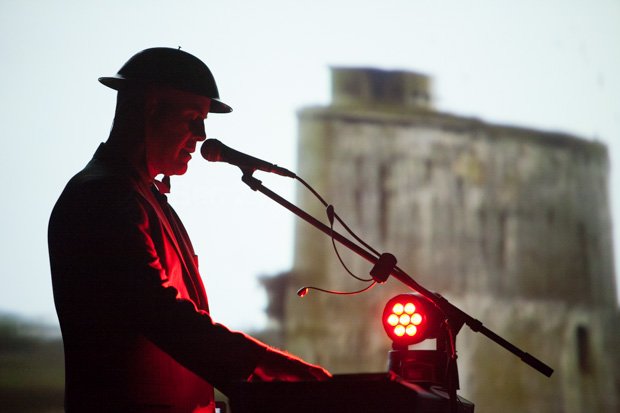 Performances at The Cedar Cultural Center always have a rather informal quality, but Thomas Dolby‘s show on Tuesday, November 5 was downright intimate. That was appropriate for the material. Dolby has recently finished his first film, The Invisible Lighthouse, about the Suffolk rivers and marshes that have inspired him throughout his career and about the closing of the Orford Ness Lighthouse, which stood above them all.

Local DJ Jake Rudh prepared the crowd for what they were about to see with a set built mostly from artists who paved the way for the performance we were about to see. Laurie Anderson, David Bowie, Kraftwerk, footage from Tron—the screen was full of innovators in film and music. One of the highlights was a Lene Lovitch performance of “New Toy,” featuring a very young Thomas Dolby (who wrote the song) on keyboards. Rudh knew his audience and his occasion. It’s little wonder he wins awards for his work.

Then came The Invisible Lighthouse. The film, which is finished for now, is not complete enough to stand on its own. This is by choice. After Dolby asked his friend, Hollywood sound designer Blake Leyh, to make his movie sound like a movie instead of a collection of amateur footage taken with no thought to sound, Leyh conceived of the idea of turning film into a live performance. As the film plays, Dolby and Leyh provide the narration, score, and sound effects onstage.

This provided an evening that felt like a peek behind the curtains. For anything other than a live radio broadcast, foley would normally be a distraction. Sounds that are perfectly reasonable in the context of, say, a walk on the beach take on a certain absurdity when recreated by stepping in place atop a box of rocks. Here, however, it reminded us that the making of the movie was as much a part of the show as the movie itself was.

We saw Dolby’s family, in photos and through the marks they left on the town over generations. We were treated to a tour of fortifications designed to withstand WWII German troops. We were swept past Ministry of Defense signs that told us to stay out. We put faces and places to songs that have been simply stories for more than three decades.

Dolby has told the story of losing an uncle in the war before he was born before. He is, as he reminded us, a storyteller first and foremost. He tells us about his songs as he performs them, and this uncle and the associations Dolby built up around his death are the story of “One of Our Submarines.” This time, however, we saw a photo of this uncle. We saw the salt marshes where he grew up, the land he was trying to defend. When Dolby played a pared-down version of the song toward the end of the show, it took on a resonance it had never had before.

When the film ended, the audience needed some time to sort out what they’d just been a part of. It wasn’t the “transmedia” nature of the event–Dolby’s done far more surreal things during his career–but the deeply personal nature of the work. Luckily, Dolby came prepared to start the Q&A portion of the evening by supplying his own questions. He and Leyh discussed the genesis of the project. Dolby provided technical details of the shoot and showed off some of the gadgetry he’d had an excuse to buy.

In response to one question, Dolby confessed that this material is harder for him to perform than a standard concert in one particular way. He said he came from an academic family, where the silence of an evening might be broken by his mother musing on the strengths and weaknesses of various editions of Virginia Woolf. They did watch television together, especially old movies. However, it seemed to embarrass his parents when characters in the old musicals would spontaneously break out into song. Doing this project, Dolby discovered that he still has some of that embarrassment buried inside, ready to jump up and rebuke him when he moves from straightforward storytelling to singing.

After taking audience questions, it was Dolby’s turn. He called “Doctor” Matt Fink to the stage and pulled out a battered notebook full of his own questions. Talk ranged from why Fink wore scrubs onstage performing with Prince (Fink came up with the idea on short notice when Prince suggested his current costume was too close to the outfit Rick James would be wearing when they opened for him) to musical esoterica (what an artist like Dolby or Prince gained and lost from producing their own material). Clips from this interview and others Dolby is conducting on his tour stops will be posted online.

Dolby concluded the evening with a short set of songs. He’s said elsewhere that he knows the songs are what people are really wanting and expecting from him when he goes onstage. Given the success of this project, that’s probably an overdose of modesty. Still, the audience enjoyed the songs, including a version of “Airhead” that brought the Dolby’s strongest jam forward from the eighties with a surprise too funny and absurd to spoil.

One of the delights of putting an introvert like Thomas Dolby on the stage is that there is never any small talk. Everything is a story, told with a purpose. It is good to find Dolby still innovating and still taking risks after all this time. This risk paid off. Let’s hope he does it again soon.

on the MacBook Keys

with Thomas Dolby and Blake Leyh

It Must Have Been My Evil Twin Brother

One of Our Submarines is Missing