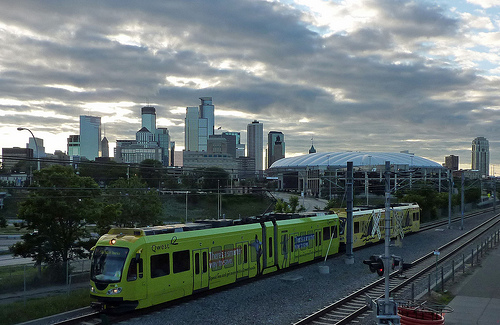 1) Our Concept of Personal Space is Unsustainable

Many of us still cling to the notions of personal space instilled in us by our Germanic forebears. There is nothing more soul-shattering than the thought of imposing on your neighbor, especially when it comes to the issue of touch. We were taught to apologize even if it just seems like you might bump into someone, and then again after the offense transpires.

Well, the metro area is predicted to get nearly a million new residents over the next twenty years. For transit riders and motorists alike, things are about to get crowded, whether we like it or not. This will mean a greater need for sound urban planning and efficient use of space. Transit is an integral piece of that puzzle. With limited space and lots of humans, we will at some point come in contact with one another.

We will have to get used to being in close proximity to people who are either annoying, talking too loudly or both. You know that person talking loudly about a recent conversation with her psychic? now you get to hear about it too! If this sounds like punishment, consider an attitude adjustment. Don’t kavetch; start a Tumblr account! “Goofy Things I Heard on the Bus!” would be well-positioned to leave “My L.L. Bean Boyfriend” in its dust.

3) People of other races and socio-economic statuses also exist. Sometimes you must stand next to them.

Transit is and will continue to be used by people of all backgrounds. Some routes will connect neighborhoods with different demographic compositions. This is part of living in a culturally rich metropolitan area. We’d all be better off learning something new about people who don’t share our economic or social backgrounds. Part of that growth mentioned above will be a growth in diversity.

Dwindling investment and interest in building more roads, growth of the metro area, and an aging population will actually force more people on to transit. The earlier we begin embracing non-single-occupancy transportation, the better Minnesotans will be positioned for the changes ahead.