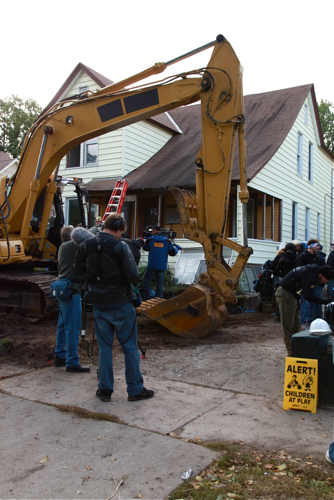 It’s the talk of the town – Ty Pennington has brought his Extreme Makeover: Home Edition’s design team to the West Side of St. Paul, and YOU can get in the act!  Neighborhood House and the St. Paul Chapter of the American Red Cross, both located on the West Side are sponsoring an “Extreme Food Drive” and an “Extreme Blood Drive” to accompany the build.

Sandy Morris’s 100-year-old house has been torn down to make way for the new home that is being built on Prescott Street for her and her home daycare. While the home makeover is the focal point, bringing the show to St. Paul will have an impact far beyond the new house on Prescott. Natalie Fedie, marketing and media relations director for St. Paul’s Department of Planning and Economic Development (PED) , said the show came to the city seeking to partner. She said, “The show itself has started advocating for the communities after seeing such an outpouring of support and volunteers in the other cities.”

Neighborhood House has been located on the West Side for over 100 years. Traditionally it serves immigrants and people living in poverty from all over the city. It operates the largest food shelf in Ramsey County, including culturally diverse foods.

Spectators to the Extreme Makeover site are asked to bring a non-perishable donation as the admission to watch the filming of the show with a goal to raise more than 25,000 pounds of food for the Neighborhood House Food Shelf.

While this special food drive runs until, Friday, October 9, Steve Kean, Director of Marketing and Public Relations for Neighborhood House, said it is important to remember that food and cash will continue to be collected after that date.

Fedie said that the American Red Cross has partnered with the show a few times in the past.

The American Red Cross is hosting convenient blood drives throughout the region for fans to give blood and show their support of the show. On Oct. 8 and 9 the Red Cross will hold a blood drive from 11 a.m. to 5 p.m.at the Neighborhood House at Wellstone Center (179 Robie Street East, St. Paul, MN).

Nick Gehrig, who is with the Red Cross, said, ” We need to collect 5000 pints of blood per week to meet the needs in our hospitals.” The goal has been set to collect 4,800 blood and 475 platelet donations during the build (Oct. 2-9) for all blood drives combined. Eligible donors are encouraged to call 1-800-GIVE-LIFE (448-3543) or go online to the Red Cross donation page to find a blood drive and schedule an appointment for the “extreme” week of blood drives.

Also, during the drive a donor registry drive will be held to encourage local volunteers and spectators to join the Be the Match registry. To join online go to the Morris house page.

Extreme Makeover brings along a crew of 70 people who stay in St. Paul for about three weeks. Fedie said that amounts to an average of 1000 room nights at local hotels, 500 gallons of gas and diesel fuel purchased in St. Paul and 400 to 500 meals served to the crew here. She said that the economic benefit to St. Paul is expected to average $1.5 million.

The Extreme Food Drive has resulted in other places organizing their own food drives, including Coldwell Banker and Saint Paul Academy, where the Morris children attend school, and at other schools. They will then deliver the food they collect to the Neighborhood House Food Shelf.

Extreme Makeover: Home Edition has an audience of 13 million and is broadcast on the ABC network in the United States. It is voiced in 58 languages, and is seen in 69 countries according to Fedie.