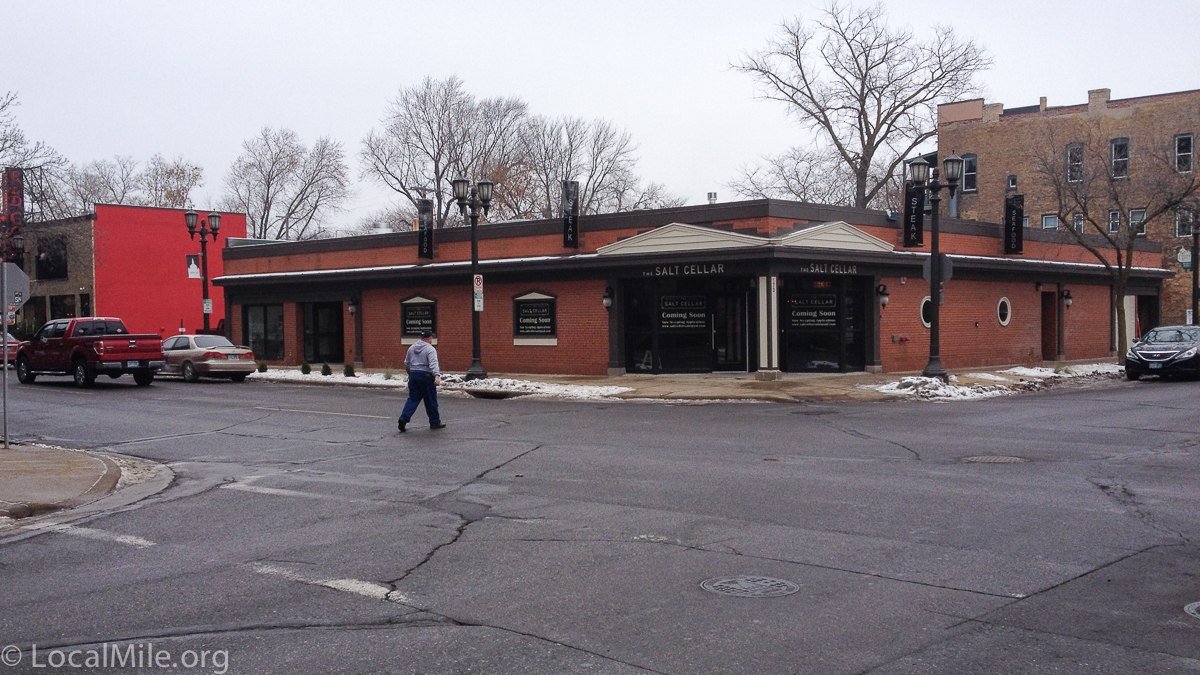 In a 7-0 vote, the St Paul City Council recently approved a somewhat controversial liquor license for The Salt Cellar restaurant on the NW corner of Selby & Dale in Cathedral Hill.

The controversy and lots of gnashing of teeth was over Bill Lindeke’s favorite sport—parking. The Salt Cellar has 13 spaces while city code requires about 30 for an establishment of this size that seats 180 fine St Paul folk.

The Salt Cellar owners contended that the lower number was grandfathered with the building.

Ted Glasrud and Assoc, who has the Blair Arcade across the street, along with local eateries Moscow On The Hill and WA Frost had fought the license and wanted the owners to add additional parking spaces. They said that parking is already tight in the area and this will only make things worse. (It should be noted that I believe Moscow On The Hill provides about zero spaces so perhaps people in spaceless establishments shouldn’t throw stones and all.)

For what it’s worth, I sympathize with both sides. We eat in this area often and have occasionally had problems finding parking. Yes there is a parking problem. I’m not sure more parking is the answer though.

Most conversations before and since the vote have centered around how to get more parking spaces in this neighborhood. That’s certainly one option. However, what if we looked instead at reducing the need for so much parking.

Parking is expensive to provide and maintain. People that utilize it should perhaps pay for what they use, especially if it’s as valuable a commodity as it becomes in this area sometimes.

While I wouldn’t oppose charging, I’m not a big fan. So consider: Right: A Salt Cellar neighbor with a much better and more inviting streetscape and better windows and light inside and that truly does reflect the glory of old Cathedral Hill while feeling open and contemporary.

Someone who walks to any of these eateries requires zero parking spaces (and if sober causes no congestion nor adds air, noise, or dirty snow pollution to the neighborhood).

People who ride bicycles take up about 1/20th as much space as a car and likewise don’t add to neighborhood congestion or pollution.

What if all of these eateries, who I believe are the primary cause of parking congestion, provided a discount to people who walk, ride a bicycle or mobility scooter, or take transit to get there? In other words, a discount if they don’t take up a parking space or add to neighborhood pollution.

Perhaps a 10% discount for walking or bicycling and 5% for transit.

Why would they do this? What’s in it for them? Topping the list is pure altruism (yes, it does still exist) to improve their customers health and make the neighborhood better. They may also benefit more directly from the better neighborhood if people choose to eat here more often because it’s a more enjoyable neighborhood with more people on the streets and fewer cars. People who’ve ridden might also feel better about themselves and be more willing to spend money on food and … dessert. People who are active and not driving may also spend more on the number one profit item for eateries—alcohol. Left: Another neighbor that better reflects the glory of old Cathedral Hill while feeling open and contemporary.

This wouldn’t be a bad PR move for these eateries either.

Or maybe the city offers businesses a buyout option on parking spaces. In place of providing some number of spaces they agree to provide a discount to folks who walk, bicycle, or bus. After all, fewer cars benefits everyone including the city who can save on street maintenance and replacement costs.

What if residential landlords offered a discount to folks who agree to not keep a car or if homeowners received a similar discount on their property taxes? Why should someone pay for something that they don’t use, whether public on-street or private lot? This is a fairly walkable/bikeable neighborhood with decent (by Twin Cities standards) transit connections so foregoing a car is not at all unrealistic. Right: Another neighbor that reflects the glory of old Cathedral Hill while feeling open and contemporary.

All of these options would not only help with the parking concerns but make the neighborhood even more appealing than it already is. And that’s a win for everyone.

As well, people walking or riding bicycles are much more likely to make purchases in local stores than someone driving by in a car. Someone who drives 3 miles each way to an eatery spends about $5 just in transportation costs (not including parking). If they save this by riding a bicycle will they be more likely to spend that $5 (or more?) on purchases at local stores or eateries?

Who knows, maybe a crazy idea like this would work. I’d love to see the day when some of the parking lots scattered along Selby (and elsewhere) are no longer needed and can once again become something useful. Like a building with a store or eatery on the first floor and people living or working on the floors above.

At top: While they get kudos for their bike parking and kitchen window, I might deny Salt Cellar a license for base offensiveness. The lack of light, windows, architectural character, and connection to the street won’t reflect the glory of old Cathedral Hill as they’d hoped but the depressiveness of The Lexington.
Smart eateries are decreasing their isolation and increasing their connectedness to the streets around them. Beyond sidewalk tables, places like Brasa, Wild Onion, Axel’s, and gobs of others are not only putting in large windows and other architectural elements that improve both the indoor experience and outdoor streetscape but are installing openable windows and walls that do everything possible to blur the line between out and in.
We’ve never chosen not to eat or drink somewhere because of too many windows, we’ve often chosen not to eat somewhere because of a lack of windows and connectedness to the outside streets.