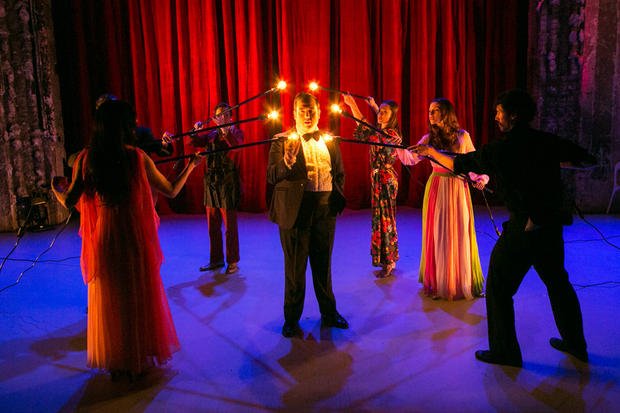 Theater Forever’s mission is to create new work that is “profoundly thought-provoking, delightfully playful and totally accessible. … The Company embraces the impulse to create the unforgettable and bring life to an art that exists beyond ourselves.”

On the one hand, it’s a tall order, on the other, the result does all that if you let yourself go with it. When you go to a dance performance, I don’t always expect to understand the narrative or for the the experience to be handed to over to me. You may have to work a little, let the effect sink in and let the aftertaste sit with you for a while once you’ve left the theater.

Jon Ferguson takes the elements together with actor Brant Miller and playwright Dominic Orlando (and the creative talents of his ensemble) as if they are making a collage. They throw them to the wind and let them fall, or they carefully place them on the stage and blow them around. They infuse the pieces with a retro collection of vaguely familiar game show elements, possibly from our shared memories, and finally fill them with life and make them move and talk on the stage.

Some of the elements include a game-show host Jack Cartwright’ (Brant)  idea of his death, game-show chicks in flowing seventies dresses, the host’s tux, the losing family, the second family, and the messiness of life add some feathers to measure the soul (an idea from Dominic) and the lights of stars. The big question of The Big Show is,  “What’s behind the curtain?” Be careful what you answer.

None of these pieces are given to the audience in a continuous narrative, but at the end all the moving pieces make a story, or at least an impression, that’s magical. The dancers Leslie O’Neil and Katelyn Skelley play multiple roles as well. Johanna Harmon, Brant Miller and the other guys (Mark Benzel, Robert Haarman and Tony Sarnicki) play contestants, stage managers and others characters flowing skillfully, gracefully in and out of the story.  And at the end, of course, there is the “applause” light above the set.

Devised theater (where the ensemble creates the play, plot and experience with a framework given by the director and sometimes a playwright) is a particular art and peculiarly invigorating. There’s no attempt to recreate a time and place, but an idea driven by a kind of specific vagueness which is very stimulating and refreshingly.

You have one more weekend to go and think about what is behind that curtain. You might just find out in this production.  At least, you will be given an opportunity to think about it. And if it doesn’t agree with you, as they offer, “Don’t hesitate to give us the gong.”