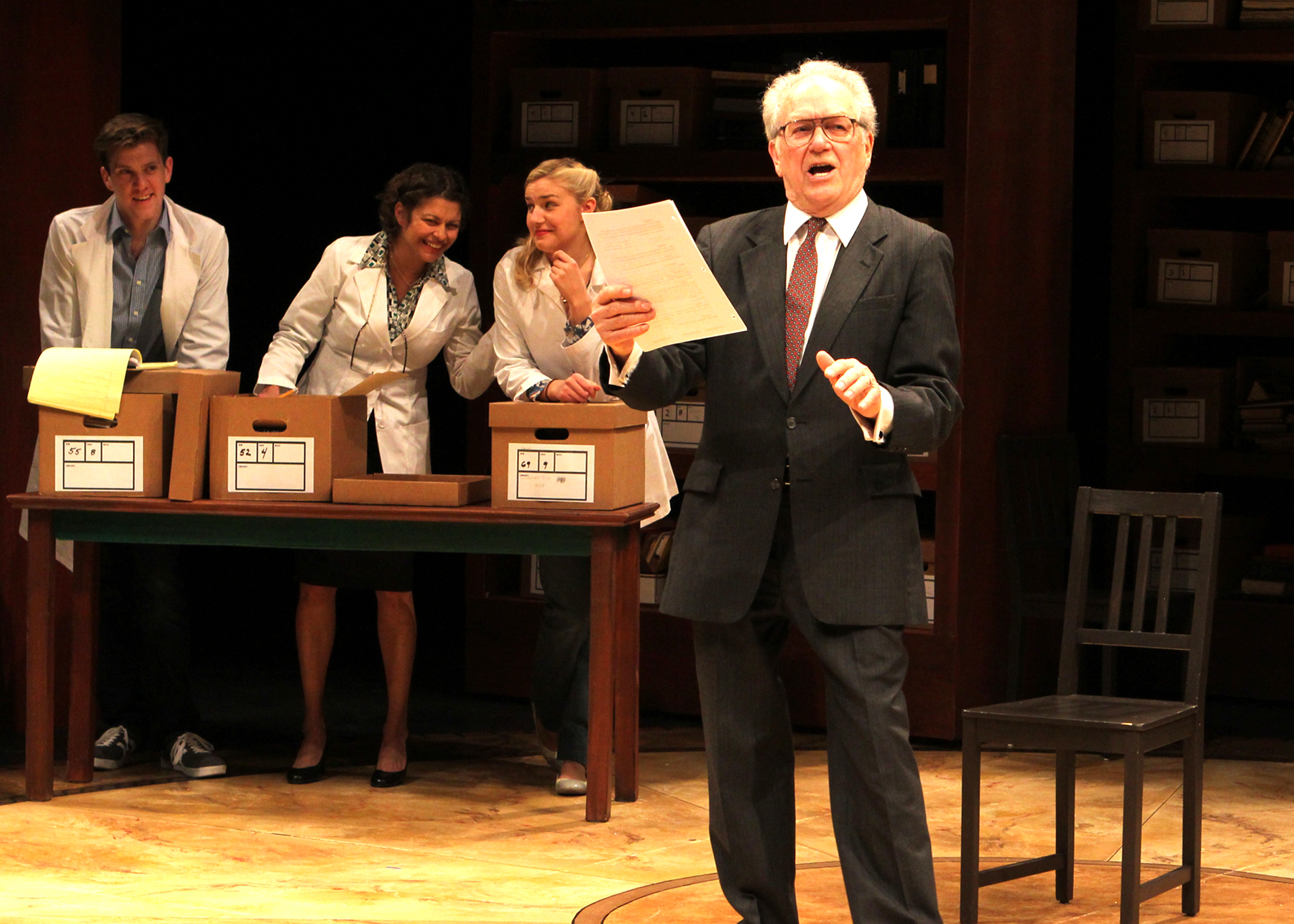 Although Justice Harry Blackmun is best known as the author of the Roe v. Wade decision that gave women the right to abortion on demand, he always stood out for me as the only U.S. Supreme Court justice whose hand I had the opportunity to shake. It occurred when I was attending an argument by a colleague at the Supreme Court in 1990. I was surprised when I saw Blackmun having lunch in the Court’s public lunchroom with his law clerks. He apparently was the only justice who made a practice of doing so. An acquaintance from the Solicitor General’s office volunteered to introduce me and I was struck by Blackmun’s graciousness when I interrupted his lunch. My colleague lost her case, but Blackuan dissented from the ruling. Similarly, when a case I worked on three years later resulted in a partial loss, Blackmun was also part of that dissent.

Playwright Lee Blessing has crafted a very entertaining drama about Blackmun and his 80-year relationship with the other Minnesotan on the Court, Chief Justice Warren Burger. The two men who were often referred to as the Minnesota Twins on the Court met when Blackmun was  five and Burger was six. They grew up in the less than fashionable St. Paul’s Dayton’s Bluff neighborhood. During their childhood, Burger was bigger, older, more athletic and the leader in their relationship. Until they served on the Court together, for much of their adult relationship they lived in different parts of the country. They maintained their relationship by correspondence. Blackmun, who apparently maintained records of every paper in his life, had a complete copy of their life-long correspondence.

Because Blessing bases his play on Blackmun’s extensive library of documents, the play is clearly from the viewpoint of Blackmun. Given the falling out that the two men had after they were both serving on the Court, a play from the viewpoint of Burger would be aptly titled The Trouble with Harry. Burger was largely responsible for Blackmun being appointed to the Supreme Court and, when Burger’s autocratic and disorganized style did not sit well with the other justices, he expected his lifelong friend to be his staunch ally. Like anyone who has a life appointment to a job they can’t be removed from, Blackmun started asserting his independence and did not always follow Burger’s lead on the Court. Burger became resentful. Blackmun was not entirely blameless; he would write scathing remarks on his copies of decisions written by Burger and apparently was one of the sources for Bob Woodward’s unflattering portrayal of Burger in the book The Brethren. By the end of their relationship, they were barely speaking to each other and Blackmun did not attend the funeral for Burger’s wife.

Although there are repeated references to the Roe decision, the play centers on the Blackmun’s relationship with Burger rather than his decisions on the Court. The show starts out with the deceased Blackmun and the deceased Burger talking to each in an effort to reconcile the relationship in the great beyond. Clyde Lund plays Blackmun and Nathaniel Fuller plays Burger. Both actors bear a striking resemblance to the real Blackmun and Burger and do an excellent job of portraying their different personas. Fuller shows the frustrated Burger who attained the highest post an attorney could hope for; yet it did not seem to bring him happiness. Blackmun plays the lighter Blackmun to whom good luck bestowed a position on the Supreme Court, but who always preferred his time as General Counsel to the Mayo Clinic when he lived in Rochester, Minn.

Director and set designer Joel Sass’s production really starts to come to life when his inventive staging rolls out the ensemble playing Library of Congress researchers with the shelves of everything ever written by Blackmun (collected by the justice himself). The ensemble also plays the roles of the Blackmun family members and fellow justices on the Court. Ensemble member E.J. Subkoviak gets to savor the role of President Richard Nixon who wanted to make sure none of Blackmun’s daughters were hippies before he appointed him to the Court. He also plays President Bill Clinton who appointed Blackmun’s successor to the Court.  Other members of the ensemble are ably played by Jamila Anderson, Charlotte Calvert and Sam Pearson. The ensemble was especially entertaining when they essentially played a game of musical chairs as they represented the other justices who served on the Court during Blackmun’s 24 years on the Court.

The mostly attorney crowd attending on Saturday night, like myself, clearly were enjoying the show and gave it a standing ovation. But my husband, a non-attorney, also found it to be entertaining. The Minnesota History Theatre seeks to entertain and educate with original plays about Minnesota’s past. The enlightening and innovative staging of Courting Harry unequivocally accomplishes this goal.