The 2010 Minneapolis Jewish Humor Festival will be the first ever of its kind, offering a variety of one-person shows, one-act plays, improvisational and standup comedy, music, film and visual art, providing a comprehensive look into the world of Jewish humor. The festival will take place at Sabes Jewish Community Center beginning February 25, and is running through March 7.

The idea for the festival came from Claire Avitabile, the director of performing arts at Sabes. “It was my idea, and it took a jam-packed nine short months to plan,” says Avitabile. “There was a Festival of Jewish Humor in California that I researched, but that was more spread out—like every weekend over the course of several months, instead of the closer-knit 11-day festival that we decided to go for.”

A variety of national and local acts will take the stage in the Dolly and Edward Fiterman Theatre, including local actor/writer Amy Salloway, whose So Kiss Me Already, Herschel Gertz! is a one-woman comedy based on a true story from when actor/writer spent her 15th year at a “freakishly Jewish” summer camp. “The show is basically about the simultaneous desire to ‘fit in’ and find one’s true identity,” says Salloway, “and all the obstacles that lie on the path towards developing self-acceptance—loneliness, embarrassment, ostracism, dorkiness.”

A group of seventh and eighth grade drama students will perform Star Wars, The Purim Spiel, the story of Purim told through Star Wars characters. Dear God, Please Choose Someone Else: The Legend of Jewish Humor is a documentary by Rex Bloomstein about how Jewish humor developed in America. Photographer/cartoonist Flash Rosenberg will conduct Laughing at the Speed of Light, in which Rosenberg will use projected images to illustrate a talk about the nature of living comically.

Illustrator/cartoonist Andrey Feldshteyn will have on display WALK, TALK, CRY, LIVE, a series of illustrations the collective name of which was inspired by a single drawing: a stoplight with those words in place of red, yellow, and blue. “It just hit me at the street crossing that it is not bad to have prompts at each life situation; when to walk, when to whatever,” says Feldshteyn. “The whole formula is very close to the dao, the ‘way,’ which is being chosen once and forever. I also think the drawing has some aura of fatalism—human beings are doomed to experience all sorts of things.” 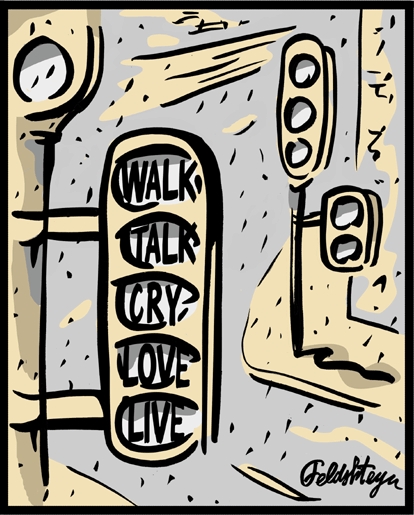 Tickets range from $0-$36 dollars, and an all-event pass will be sold for $90, allowing access to most events. Though this is a Jewish humor festival, Avitabile also encourages gentiles to attend. “It is really for everyone—Jewish and non-Jewish alike,” says Avitabile. “The proof is that I am not Jewish, and I came up with the idea and planned this festival!”

What makes humor so crucial in daily Jewish life is the subject of “The History of Jewish Humor,” a talk by Rabbi Sim Glaser. “Jews have suffered so much oppression, the only thing we can do to stay afloat is to laugh at ourselves or kid about others,” says Glaser. “This is laughter through tears. This is about making the oppressor laugh because as long as you’re laughing at me, you won’t or can’t hurt me. It is also, ahem, being smart, clever, talented, and, to some extent, desperate.”