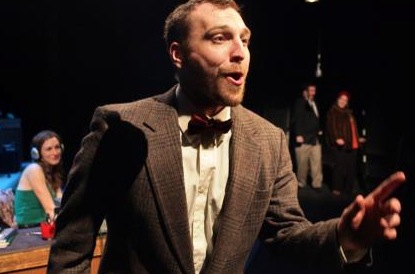 Yellow Tree Theatre is presenting the world premiere of Stay Tuned, a new musical concerning an eclectic radio show reminiscent of A Prairie Home Companion.  The musical was created by Yellow Tree artists Blake Thomas, Mary Fox, and Andy Frye, who also play three of the major roles. The music performances alone make the show worth attending. However, the story and motivations of the characters clearly need some work to make this musical a great show.

The plays action revolves around a 50-year-old live radio show called The Emerald Coffee Radio Hour. The owner and host of the show has died and his son Gordon, played by Ryan Nelson, has inherited the show that presented varied musical performers over the years, including Patsy Cline, and Dean Martin. Scotty, Rusty, and Emma provide the original music, commercial jingles, and comedy skits for the show.

The three remaining cast members continue to believe in the show’s rich legacy. Gordon, on the other hand, has no appreciation or love for his father’s previous work and is seeking to make changes. Enter Ashabel Baker, played by Jessica Lind Peterson. She is brought in ostensibly to increase the show’s ratings as both the new musical host and producer for the show. It’s mentioned that her previous gig had been working on The Howard Stern Show.

The show’s plot and characters definitely need some work. Nelson clearly enjoys playing the show’s lecherous, hard-hearted owner; but in Gordon, we have a very one-dimensional character. Gordon is a total jerk and wants to get rid of everyone who worked with his father, but for some unexplained reason he does not fire Rusty, Scotty, and Emma. Instead, he brings in a new producer and has her decisions serve to drive everyone to quit. In reality, everyday business decisions often result in the dumping of existing radio formats and personnel, and bringing in a new format without the decision makers being quite so wretched.

A more compelling motivational flaw is the question: Why do Rusty, Scotty, and Emma stay with the show as long as they do? It is obvious to everyone in the audience that there is no way they can stay and be true to their artistic vision of the show. A final irritating side issue is why corporate minion Ashabel keeps pressuring free-spirited Emma to dress in suits and heels. Given that is it is a radio show, why would Ashabel even care what Emma wears?

Katie Phillips has designed a wonderful stage set, consisting of sound booth and performance recording area. She provides rich detail in the memorabilia displayed across the set including signed posters of past guest performers.