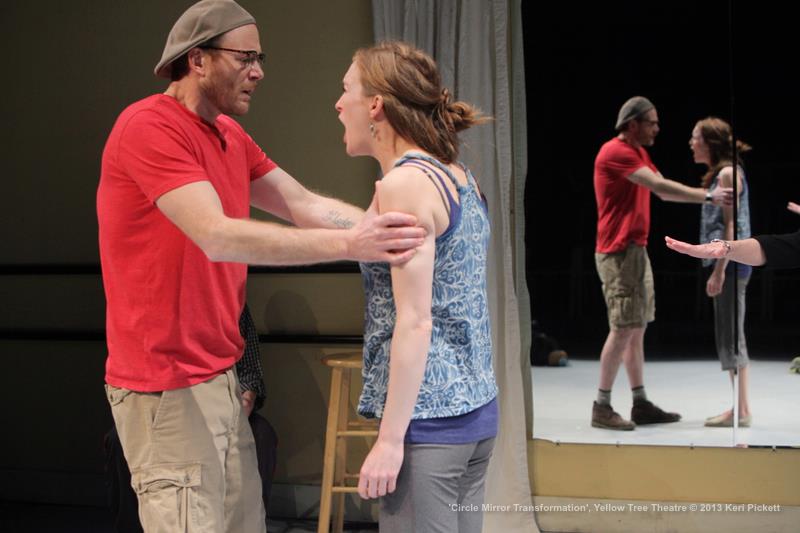 It’s true that some people love touchy-feely theater workshops more than actually performing. They engage in creative self-exploration by participating in theater games, improvisational exercises, self-revelatory monologues and other activities. But what if the workshop participants found themselves trapped within a reflection of a reflection? What if they find they don’t want to get out?

Anne Baker’s play Circle Mirror Transformation just completed performances at Yellow Tree Theatre in Osseo. I found the script to be incisive and witty with its poetic dialogue. The playwright’s focus is a theater workshop in a small town community center. Through a series of vignettes we see the characters become caught-up in an extraordinary exploration of the boundary between art and life. The workshop leader, her aging-hippie husband, a divorced artisan, a siren-like young woman and a millennial teenager are enthusiastic to explore life on many levels.

The play follows the workshop over the course of a summer. The workshop provides an innovative play-within-a-play structure, reflecting life with its multiple layers of reality. To run a workshop of abstract theater exercises, a leader must convey that the participants are doing the most creative work in the world. Doree Du Toit channels natural exuberance into the character of Marty, the experienced workshop leader. But even her authority gets rattled when her husband uses the games to declare his love for another group member.

Kurt Schweickhardt plays Marty’s husband James, a character who clearly had a good time in the sixties and beyond.  Dan Hopman plays Schulze, a small town artisan who crafts chairs.  His comic ability shines as his character can hardly contain his infatuation for Theresa during workshop exercises. Tara Borman has a minimal role at first, but then becomes more animated as the troubled teenage girl whose presence keeps the adults’ in line, most of the time. Theresa, played by Jessica Lind Peterson, is a former actress recently moved from New York City. She loves the star struck effect she has on the men in the workshop. Like that of a goddess who recently came to live among mortals. She doesn’t openly flirt with them, but she accepts their declarations toward her as a kind of communal free love.

The theater games lead to the individual dramas: James publicly confesses his love for Theresa, crushing Marty; Lauren’s parents forget to pay her tuition because of a deeper family dysfunction; and Schulz and Teresa hook up and break up between workshop sessions.

But no matter what happens, they all continue to attend the workshop sessions until the end. The sessions are both an essential and transforming part of their lives. Yellow Tree is a marvelous theater for presenting Circle Mirror Transformation. Director Andy Frye’s simple staging works wonderfully in Yellow Tree’s intimate performance area.