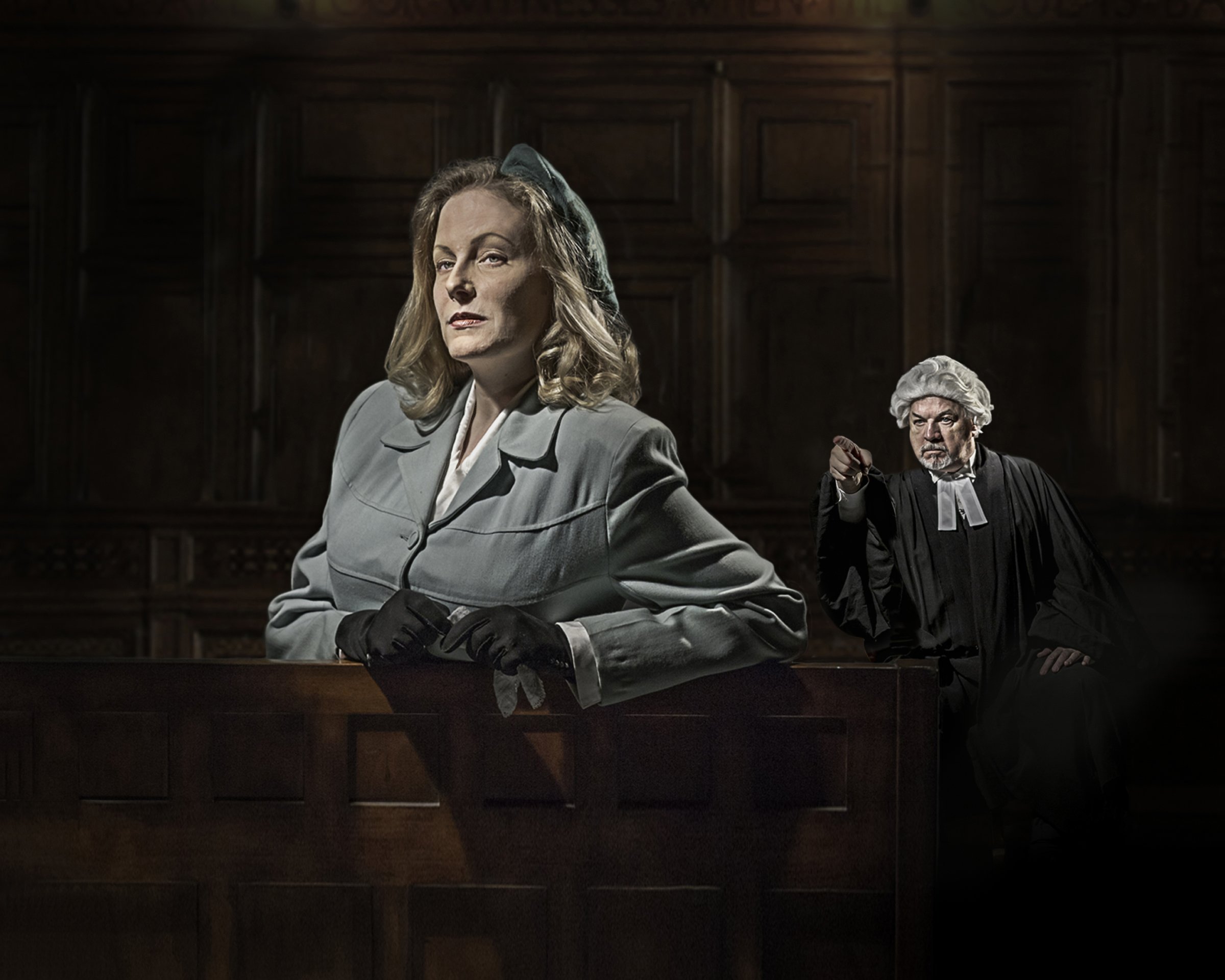 Photo coutesy Theatre in the Round

Murder mystery fans are in for a treat at Theatre in the Round’s current production of Agatha Christie’s Witness for the Prosecution. Set in post-war London of the 1950s, the play is a “who done it” with numerous plot twists and turns that keeps the audience guessing until the very last scene. Lynn Musgrave directs the play in vintage-style, letting the audience follow the unraveling of the mystery.

The story begins with a seemingly affable and apparently dim witted young man named Leonard Vole. Vole is a war veteran who brought home a German wife named Romaine. He is currently unemployed and he and Mr. Mayhew, his solicitor (a general purpose attorney), visit Sir. Wilfred Robarts, a barrister (an attorney who only does trial work). Vole is concerned that he may be charged with murder. The victim is Emily French, a wealthy fifty-eight year old woman, with whom Vole recently became friends. A recurring joke in the show is the references to French as “elderly.” The nature of Vole’s relationship with Miss French is an on-going question: was she a surrogate aunt or a romantic interest. The audience soon learns that although Vole only knew French for a couple of months, she redrafted her will shortly before her death leaving the bulk of her fortune to Vole. Vole’s entire defense is dependent solely upon the alibi testimony of his wife Romanine who is the most mysterious character in the play.

To disclose any more about the plot would only spoil it for those who have not yet attended the show. But the action in the play occurs either in Sir Robarts office or in the courtroom proceedings. The direct and cross examinations of the witnesses provide the most exciting scenes in the play, most notably the cross-examination of Ms. French’s housekeeper, Janet MacKenzie. This is a murder mystery, plain and not always so simple, with little character development except as necessary to the plot. Although the lead role is Sir Robarts and he is in virtually every scene, we learn little about him outside the courtroom.

Musgrave’s direction stays true to the murder mystery format and the cast stay in character throughout the show. Standouts in the cast include Paul Schoenack as the very competent but sometimes confused Sir Robarts. Tina Frederickson vamps it up as the mysterious Romaine. With the role of Janet Mackenzie, Kristen Mathisen makes the most of her opportunity to create the most fully developed character as the slighted housekeeper who is as devoted to her knitting as she was to her mistress. Finally Emanuel Ardeleanu does a convincing job as the likeable Vole. The only flaw during the opening night performance was what appeared to be unintended humor near the end which had the unfortunate effect of interrupting the tension building to the final moment.

Witness for the Prosecution is not great theater, but it is intellectually challenging. Those in attendance must pay constant attention as they brace themselves for the final twist.