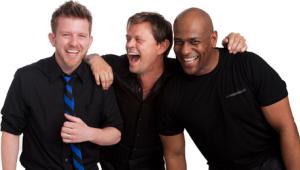 Percy Sledge wrote: “When a man loves a woman, he can’t keep his mind on nothing else. He’ll trade the world for the good thing he’s found.” With that said, Mary Kelley Leer, Sanford Moore and Dane Stauffer’s When A Man Loves a Diva inspired title had me hoping for a performance that would keep my mind on nothing else. Although there were a few “Viva la Diva” moments, the “musidramacom” (yes, I made that word up) played out inconsistently on its opening night on Thursday, July 11th at The Lab Theatre in Minneapolis’s Warehouse District.

Now in its fourth run, When A Man Loves A Diva is a compilation of classic pop/rock (and a couple of country) standards made epic by their diva performers including Aretha Franklin, Barbara Streisand, Gloria Gaynor, Tina Turner, Whitney Houston and more. The songs are sung by a notable trio of male performers–each one an award-winning “star” is his own right with deep roots here in the Twin Cities theater scene (details of their careers can be found in The Lab Theater’s website). Ben Bakken, Julius Collins and Dane Stauffer are three of the men who love divas and sing their tributes. Sanford Moore, musician extraordinaire and one of the show’s creators, is a fourth. Moore brings his notable reputation to the Diva stage as the music arranger, pianist and band conductor. Backing musicians include Geoff LeCrone on guitar, Jay Young on bass and Demetrius Mabry on drums.

When A Man Loves A Diva is part concert, part cabaret, part stand-up comedy and part drama (drama does put the “d” in diva, after all). Diva is always entertaining–it’s just inconsistent in how entertaining. The comedy (done best by Stauffer) is usually performed with good timing, but sometimes comes across more like a guy attempting to “do drag” (and without a good costume, let alone pair of shoes). Example: the Cher number fell flat as it’s unclear whether you’re watching an intentionally sarcastic impersonation, an “off” performance, or just a bad theatrical interpretation. The cabaret (done best by Bakken) is defined by typical and not very inspired dance moves. My pal noted she was consistently distracted by dance moves that just get plain irritating after a few renditions. Perhaps more “snap” and less “right arm roll”? And again, the shoes … Divas do not do flats, let alone, “bumper” tennies. The drama (done best by Collins), then, becomes the anchor which keeps it all together. His low-key candor is a welcome respite and provides a sense of awe and respect similar to what you feel for a Diva.

As an audience member, sometimes you’re not quite sure what time it is on-stage. Time to play? As at times, there’s audience participation and interaction. Time to listen? Like when the rapt audience stopped breathing for Collins’ tribute to Whitney Houston’s “I Will Always Love You” (written by diva Dolly Parton) or Bakken’s heartfelt rendition of Bonnie Raitt’s “I Can’t Make You Love Me” (written by two men: Mike Reid and Allen Shamblin)? Or time to stand up and shout and sing along (okay, for a Minnesota audience this is asking a lot, but it did happen for the final number!)?

Sonya Berlovitz is listed as the costume designer, but that’s somewhat of a stretch as really the singers are wearing their own “basic blacks” which could have been a bit more stylish and better fitted. Bakken even seems to reinvent the ghost of Footloose past with Converse shoes and a skinny tie. Seems to me that a show with Diva in the title needs, at the very least, epic footwear.

Highlights of Diva include the performers’s solos in the second half of the show: strong and straightforward singing of their favorite hits along with brief personal introductions. A tribute to back-up singers in the first half is hilarious and showcases how fabulous these performers sound together. Moore’s band provided ample backing music, although the musicians are spread along the back of the stage which was distracting as a backdrop to the singers. The staging is simple and as such, not very diva-licious. (Sorry, but one pink boa does not a diva make.)

The Lab Theater was close to a full house and the audience showcased a wide range of ages. Perhaps go with a group of pals who love sing-alongs as much as they love “Greatest Hits” compilations. That way, you can have a karaoke contest on the way home if you need to supplement the evening’s performance.

When A Man Loves A Diva will be performed on Thursday, Friday and Saturday evenings at 8 p.m. at The Lab Theater through August 3rd, 2013.