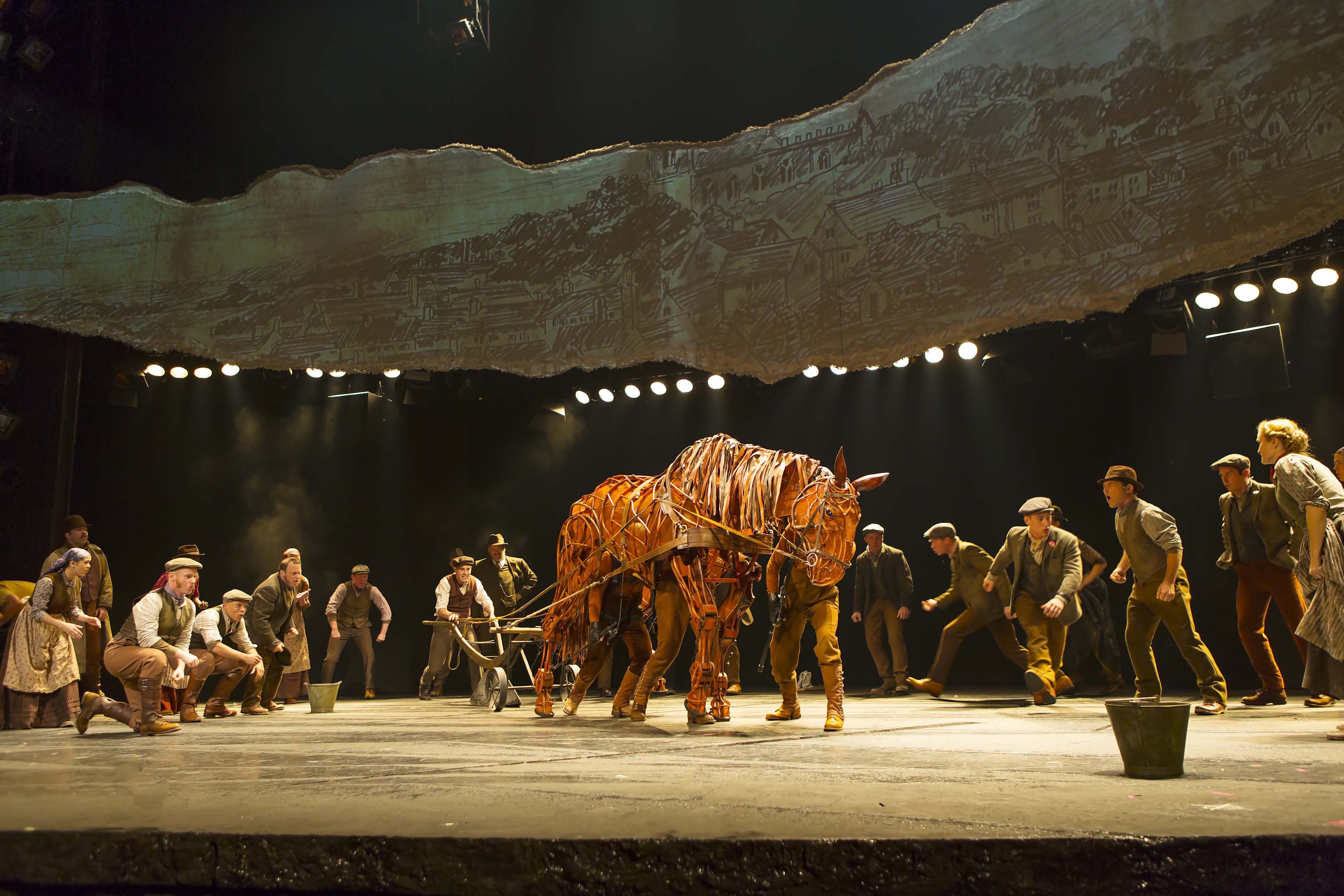 The Orpheum Theatre, and downtown for that matter, were buzzing with anticipation for the opening night of War Horse on Wednesday, June 12. I had a hunch that Steven Spielberg’s 2011 movie adaptation played a part in the giddy turnout. While that may have been the case for some, myself included, it was clear from overheard conversations that the play is a big deal in and of itself. Whatever the case, War Horse is worthy of the hype.

Easily the most impressive aspect of War Horse is the puppetry by South Africa’s Handspring Puppet Company (Adrian Kohler with Basil Jones). Each horse (made of steel, leather and aircraft cables) is manned by three actors (sometimes two) who make up the head, the torso, and the rear. Toby Sedgwick’s so-called “horse choreography” is impressive, as well as the actors who move so flawlessly together to imitate equine movements. The puppetry is on par with The Lion King. But whereas The Lion King is focused on flare and illusion, the puppetry in War Horse sticks to the realism aspect, so much so that audience members readily look past the actor standing in plain sight manipulating the puppet.

War Horse, adapted from Michael Morpurgo’s novel, takes place during the four bitter years of World War I. The play brings to stage the hardship and brutality of the war through one family’s experience and, of course, their horse Joey. Drunkard Ted Narracott (Todd Cerveris), in a deeply embedded feud with his brother Arthur (Chad Jennings), outrageously outbids him and his son Billy (Michael Wyatt Cox) on a foal at an auction in Devon (England). The smug Ted brings the foal home to his enraged wife Rose (Angela Reed), caring less about the prize than about beating his brother. He leaves the foal to his 16-year-old son Albert (Alex Morf) to train. Albert forms an obsessive attachment to the horse, and when Ted sells Joey to Lieutenant James Nicholls (Jason Loughlin) behind Albert’s back, the boy resolves to leave home and join the army under the guise of a 19-year-old to find his horse … even if that means fighting in a war. Morf plays the part of a 16-year-old boy brilliantly—and by that I mean he was whiney, at times annoying, but endearing in his naïveté all the same.

Throughout the war, Joey finds himself in the company of a variety of owners, like a little girl named Emilie (Lavita Shaurice) and German Captain Friedrich Muller (Andrew May)—both clearly finished with an unfinished war. In this instance and another in which an English and German soldier find a way to work together to free Joey from an entanglement of barbed wire, we see enemies unify. It’s Joey the horse who’s able to draw out the human side of the people hardened from war; it’s touching and devastating at the same time.

On the stage, War Horse is able to bring to life a puppet and create the atrocity of war. From Rae Smith’s drawings projected onto a suspended screen in the backdrop to “Song Man (Vocal)”’s Celtic song narration between scenes, there’s an element of artistry that’s lost on the movie. The moment foal Joey turns into grown-up Joey, a scene that prompted applause, I found myself feeling like Albert—which is, to say, totally invested in War Horse.

Read Morgan Halaska’s review of The Book of Mormon (February 2013).