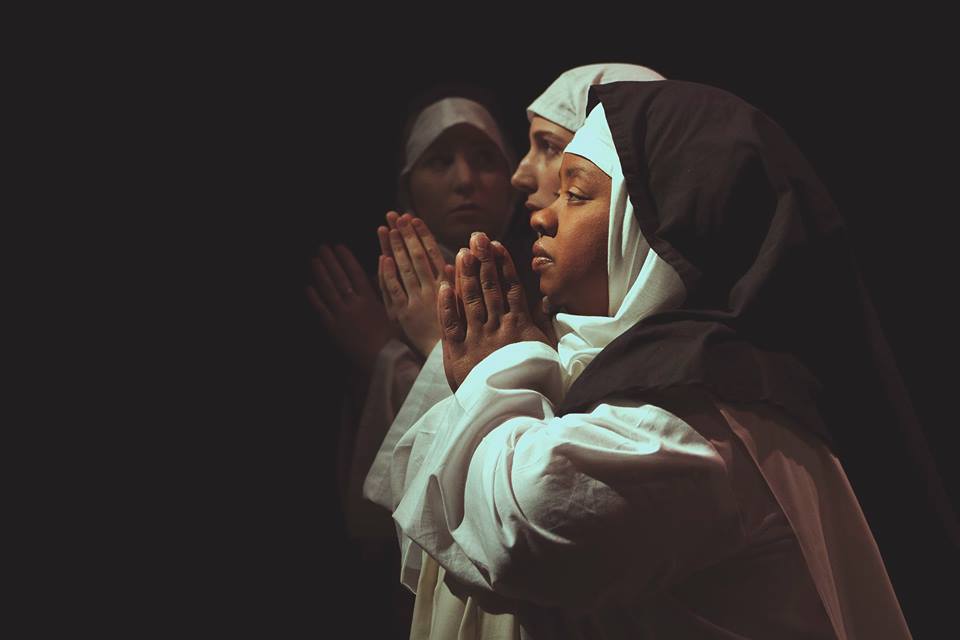 I’m fully behind Gadfly Theatre Productions’ mission of creating queer and feminist theater and art. (Heck, I even took part in their original shorts festival last summer.) But Vanda’s Vile Affections isn’t doing them any favors. The script has so many unreliable narrators for this supposedly true but sparsely documented story of nuns under investigation in 17th century Italy that I not only lost the thread of the story, at a certain point I wasn’t even sure what the story was anymore. The case of Sister Benedetta Carlini (Amanda Kay Thomm Bahr) is notable for being one of the earliest documented cases of a lesbian affair. But Benedetta’s sexual relations with Sister Bartolomea Crivelli (Bart, for short) (Emily Weiss) don’t take place until well into the second act. And it’s not as if there’s a slow burn leading up to the event throughout the first act. In that sense, Vile Affections would appear to be about something else. What that is (you’ll pardon the expression) God only knows.

“We must know exactly what abomination occurred for the report.”

The Provost Cecchi (Robb Krueger) and his young scribe Antonio (Andrew Rosdall) have come to the convent to follow up on reports that Benedetta is having visions. Everybody wants to make sure that they’re the right kind of visions – sent from God and not Satan. The director’s notes say that in reality Benedetta was tried not once, but twice. The second time, the population of the nearby town was nervous because Benedetta had threatened them with a plague. Since we never see or meet any of the townsfolk but are sequestered, like the nuns, exclusively in the convent, it’s hard to take those stakes seriously.

“God knows your heart and will guide me to the truth.”

The internal politicking among the nuns appears to play a part in these proceedings. After all, there’s no politics nastier than church politics. Sister Fiora (Dana Lee Thompson) chafes under Benedetta’s leadership, while worldly Sister Caterina (Sarah Parker) just tries to keep everything from getting needlessly melodramatic. Sister Bart is a bit starstruck by Benedetta, her visions and her stigmata. It doesn’t take much of a nudge to turn her nun-crush into something a bit more intense. Even protective Father Ricordati (Jim Larsen) and the skeptical Provost seem to have fallen under Benedetta’s charismatic spell. Benedetta appears to be a benign, even reluctant, leader. But the further the Provost gets into his investigation, the more the story seems to split off into multiple directions, until at certain points it feels like an all-nun version of Rashomon.

“Why you? Why would Christ choose you? Why am I never the one who is chosen?”

I guess my biggest problem with Vile Affections is its lazy attitude toward the depiction of a community of faith. Other nun stories I’ve seen in recent years work best when they invite us in to the rituals of the nuns’ world. That way when the rituals are broken, even slightly, it means something. Vile Affections, and Gadfly’s production, seems more interested in the histrionic moments of Benedetta’s visions—and the heavenly orgasms brought on by the Holy Spirit’s visitation to the good sister’s bedroom, not to mention the near rape by an evil spirit, and of course the hot nun-on-nun action of act two. The convent appears to be more of a women’s prison than a place of refuge and spiritual revival. Now, if that was the point of Vile Affections, that’d be one thing. But that doesn’t seem to be the point. In fact it’s hard to know what the point is because the narrative isn’t building toward anything or being guided by any sort of central thesis or theme. Even with its “flashback within a flashback countered by a competing flashback” structure, it doesn’t feel like the layers of the onion are being peeled away to reveal any sort of deeper truth.

In fact, even the big love scene is played for laughs rather than any kind of real intimacy or transcendence. Sister Bart keeps calling out more exposition to the inquisitors from her position under Sister Benedetta. Meanwhile, the men are absolutely gobsmacked at the very idea of lesbian sex. Wait? There’s no penis? How is that… possible? So any genuine emotion or even basic sexuality is shortchanged for a cheap joke for which the orgasm is the punchline. I’m not sure I’d trumpet that moment as either queer or feminist but I suppose an argument could be made.

“God’s hand reached down from the heavens and yanked me into this life.”

To be honest, all of this is so deliberate on the part of the author that I have to assume it’s just a different school of playwriting—one that’s confrontational and doesn’t take anything seriously. The existence of faith or devotion is beside the point, as is any form of sentimentality. It’s a transgressive form of theater that exists merely to make its point and it doesn’t care if you like it or warm up to it or not. It’s not there for your approval or to draw you into its story. But the notion that this is the patriarchy or the established order taking this woman down is not borne out by the script. As it stands, the three men are well-meaning but bumbling representatives of any kind of authority. They don’t bring down Benedetta so much as stumble onto a “scandal” from which she can’t extricate herself. Then disaffected nuns like Fiora start piling on and Benedetta is finished.

“Passions and desires assault me daily. I am afraid I will infect your children.”

Unlike the playwright Vanda, I am not an Edward Albee Fellow, I am not a Lamda National Literary Award Finalist, and I am not one of Dramatist Guild Magazine’s “50 Playwrights To Watch.”  So on a certain level, who am I to argue with her writing strategy?  But I was the one sitting in the audience, rooting for this theater company, desperately trying to make some sense out of Vile Affections and honestly, I came up wanting. The cast under Cassandra Snow’s direction is trying their level best, but the script isn’t giving them much to work with. (For sheer metaphorical balls, however, you have to hand it to Amanda Kay Thomm Bahr as Benedetta. She has some pretty over the top things asked of her, and she fully commits. Just the whole “sex with the Holy Spirit” sequence alone, she had some giggle-inducing material there, and she didn’t let it stop her. Consider yourself warned about screaming orgasms on stage.)