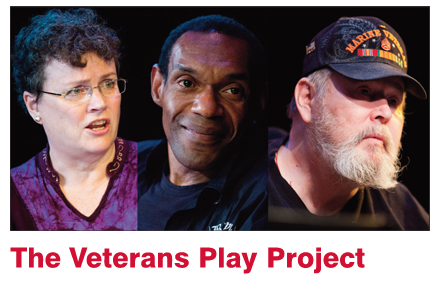 Around Veterans Day, it’s common to hear the phrase “some gave all, but all gave some.”  The Veterans Play Project succeeds in showing the many different and often hidden burdens those who have served carry with them.

Unlike many portrayals of war, the stories told in the play are not fictional. They were collected from more than 100 Minnesota veterans, some of whom act in the play and bring life to their personal experiences.  Adding to the realism, 13 of the play’s 20 cast members have served or are now serving in the military.

The Veterans Play Project tells the story of the fictional Midwest town of Smedley, whose inhabitants must decide how to honor the veterans among them.

The town is forced to confront the question, when two Hollywood movie producers roll into to town, wanting to turn the large rock face in the center of the town into a veteran’s memorial and make a movie about the process.

In Smedley are veterans who have served in Korea, Vietnam, Desert Storm and Bosnia, as well as more recent conflicts.

One storyline follows a group of them that has banded together as part of the “Occupy” movement to prevent a bank from seizing a Korean War veteran’s house. As they wait for the bank to arrive, each veteran pulls back the curtain on his or her own memories as they talk amongst themselves.

One of them is played by Samuel Ortiz Verdeja. He plays a character who, like himself, served in the Army as an enlisted man in Vietnam, only to be ignored by the system when he returned home.

In an interview, he talked about how the government was more than happy to have young Latinos serve in combat but then wanted nothing to do with them after they had served their country: “We were shunned by the system. We were told to look for help from our own communities, rather than the VA.”

Another storyline follows a Desert Storm veteran turned grade-school teacher who deals with memories of his service, while at the same time coming to terms with his own daughter’s decision to enlist in the army. As she goes through basic training, she experiences the realities of military life that are often not talked about.

As the play moves from the town, to the foreclosed house, to basic training, and to the characters’ memories of their service, the audience can feel the fragmented experiences each veteran has to come to terms with.

The play is not acted on a traditional stage, but is instead performed in amphitheater in a former army building at Fort Snelling. Not only does the location’s history go well with play, the unique setting allows for the stories to play out on four sub-stages, adding to the dislocation already present as the narratives shift in time and space.

A variety of well-performed live music — ranging from rock, to gospel , to country — not only helps to tell the story, but also emphasizes the diversity of veterans’ themselves.

Diane Kinney, who both plays a social worker who helps veterans and is herself one in real life, spoke about the bond that veterans have: “They’re at ease with each other and will share things with other veterans they won’t share with anyone else.”

The power of the Veterans Play Project is that is speaks to both those who served and those who have not. In it, veterans will find much they can relate to, including aspects of their service they are unlikely to often bring up often.  For those who never served, it’s a poignant reminder of the high — and often hidden — price that those who protect us pay, even after they have taken off the uniform.

The Veterans Play Project offers two ways to attend. One is-no cost admission: free seats will be available at the box office (which opens two hours before the show). For guaranteed admission, tickets can be purchased for $20 at  www.mixedblood.com or by calling  (612) 338-6131.

Seniors and anyone who self-identifies as a person with a disability can obtain free reserved admission and free round-trip cab rides to performances by calling the box office.

The Veterans Play Project is a partnership of the Footprints Collective, Mixed Blood Theatre and the Minnesota Humanities Center.