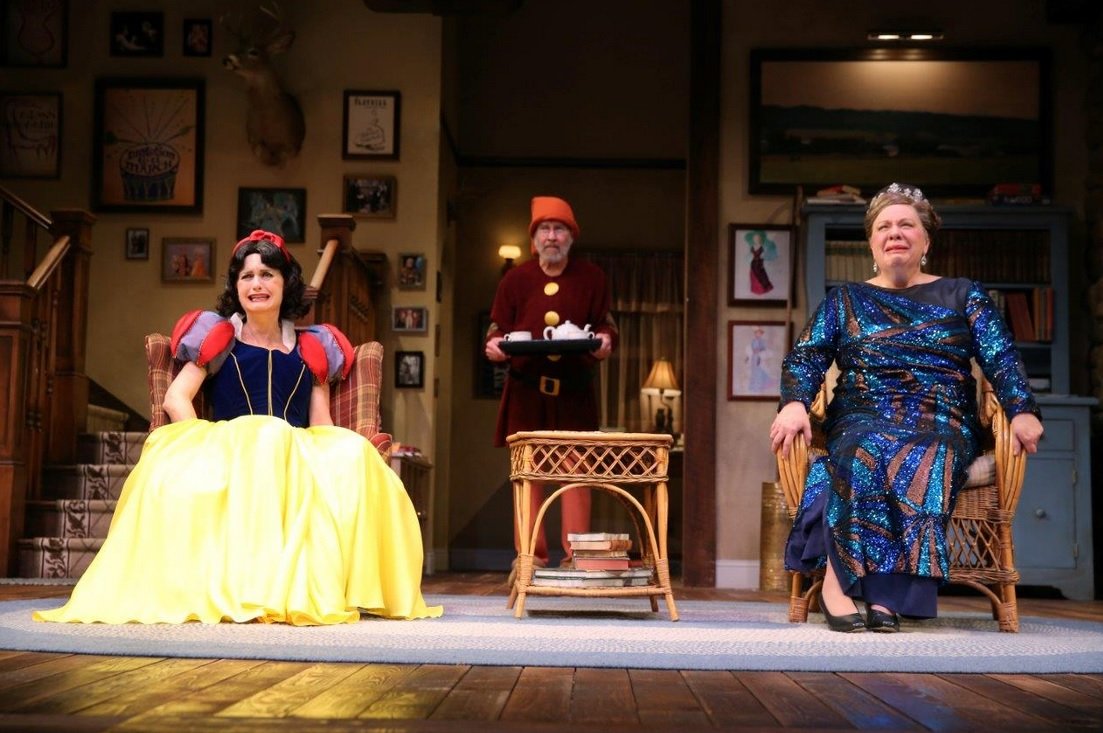 The first five minutes of Christopher Durang’s Vanya and Sonia and Masha and Spike starts off deceptively boring. Then, in the tranquil quiet of a living room full of wicker chairs, quilted throws and mismatched socks, Sonia hurls a white ceramic coffee mug to the ground in a fit of wild unhappiness. It’s loud, physical and absurd—much like the rest of the play. Siblings Sonia and Vanya, played by Suzanne Warmanen and Charles Janasz, appear tame in their frumpy shirts and limp bathrobes, but underneath the benign exterior bubbles bitterness, doubt and a hilarious competitive streak. These feelings become even more inflamed when their sister Masha and her much younger boyfriend Spike visit from out of town. Masha is played by Candy Buckley with a delightful sense of comedic timing and fiery charisma. I won’t give it away, but all major characters dress for a costume party before the end of the first act and Buckley’s costume reveal is so subtly ridiculous the whole audience couldn’t stop laughing.

While the show has well-placed laughs and a cast that will keep you in stitches, the overall message feels hollow. The main characters are bitter about their twilight years, but have little to say beyond their complaints. In the second act, Vanya goes on a minutes long monologue about the difference between his generation and that of the 29-year-old Spike. The crux of the rant rests on Vanya’s anger that Spike has never licked a stamp. Although the character Spike consistently plays the role of stupid jester, I find it hard to believe that a 29-year-old has never licked a stamp. I am younger than Spike and I have licked a stamp.

That’s not really the point. The point is, every now and then characters like Vanya go into long tirades about how the younger generation lacks some golden quality because they’ve grown up with an emphasis on multitasking, technological gadgets and social media. This idea is tired. Instead of criticizing generational differences, writing should take a more refreshing approach and discuss these distinctions with curiosity.

A feeble attempt at fleshing out the younger generation reveals itself in the character Nina, a neighbor girl who adores the older characters and does everything they ask. She demonstrates a stark contrast to the insipid Spike, but like him, remains one dimensional. The representation in these characters—the only young people in the whole show—suggests that blindly obedient young folk are favorable to the vapid technology loving ones.

Cassandra—played by the hysterical Isabell Monk O’Connor—presents another problematic character. I find it upsetting that the only person of color in the whole show is the Voodoo practicing cleaning lady. The most agitating part about Cassandra happens when Vanya declares the 50s as the best decade in American history and Cassandra nods her head in agreement, as if the memory of the Civil Rights Movement tickles her with happiness.

With half the characters written as one dimensional stereotypes, the play fizzles. At one point, Vanya bemoans how theater has lost its influence over the social consciousness. This observation is sad, but true. If the theater would like a more prominent place in national conversation, perhaps it should stop alienating future audiences with views that lack scope and interest in the richness of diversity.