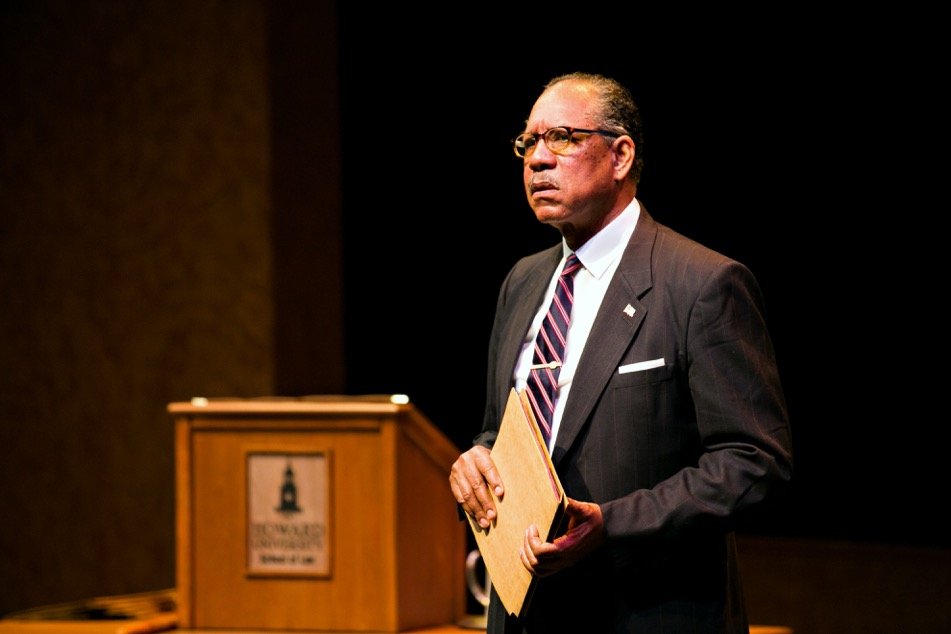 A hundred years after the end of legal slavery, Thurgood Marshall became the first African-American to sit on the United States Supreme Court. George Stevens, Jr.’s play Thurgood, about the life of Justice Marshall brings to light many little known facts about Marshall’s early years and some of the significant accomplishments he made as an attorney before he was elevated to the high court. Michael Robins directs James Craven in a one-man show about Marshall at Illusion Theater.

George Stevens, Jr., is best known to me as the writer of the screenplay for the television movie Separate but Equal which provides a detailed history of the facts behind the landmark 1954 school desegregation case of Brown v. Board of Education. This case, as noted in the play, was the most significant decision made by the U.S. Supreme Court in the 20th century. It rendered illegal government sanctioned segregation of the races in school systems and, ultimately, it was the legal underpinning for elimination of all government laws that segregated people by race. As the attorney for the NACCP (National Association for the Advancement of Colored People) in the case, Marshall both spearheaded the efforts to recruit plaintiffs and ultimately argued the case twice before the U.S. Supreme Court.

Despite the fact that Marshall went on to have a respected career as a supreme court justice, his efforts in Brown were truly the highpoint of his life’s work and legally paved the way for greater  equal justice under the law. Steven’s play wisely chose to make this case the cornerstone of the one-man play, but sometimes this focus distracted from sharing more about the man who was a major force in the case. A major drawback to the play is its use of recycled material: almost half of Marshall’s recollections in the play come directly from Steven’s screenplay for Separate but Equal. Also, this emphasis on the Brown case unduly minimizes Marshall’s five other cases before the U.S. Supreme Court which resulted in significant civil rights advancement.

The play left me wanting more fresh insights to Marshall the man, especially in the last 35 years of his life. Marshall mentions that after Brown he left the NAACP, where he had devoted his entire legal career, to take a job with a private law firm and finally make some money. But the play provides little insight as to why making money suddenly became a priority for a man who had devoted his life to using the law to obtain social justice. More importantly, there was little insight as to what life was like for Marshall as the first African-American on the U.S. Supreme Court.  In fact, details of Marshall’s time on the Court were sketchy in the play. There was no mention of Marshall’s poor health his last few years on the Court and how, despite his poor health, he unsuccessfully tried his best to remain on the court during a 12-year reign of Republican presidents.  His efforts to remain long enough so he could retire during a Democratic presidency and avoid a conservative appointment as his replacement proved futile when his health failed.  It must have been heartbreaking for this champion of civil rights to see his position filled by the ultra-conservative Clarence Thomas and, thus, deprive the Court of a true voice from the African-American community. Yet, the play does not touch on this at all.

James Craven’s performance successfully takes on the persona of Marshall and he convincingly plays an elder statesman who is proud of his accomplishments and wants to share the adversity that both he and all African-Americans faced in this nation. The set recreates a lecture hall at Howard University, the African-American law school that Marshall attended after he was denied admission to the University of Maryland Law School because of the color of his skin. The set gives him sufficient space to walk around and recreate key court arguments. There is a screen in the center of the stage, but use of the screen to show photos was of limited success since the photos did not always line up with what Craven was talking about at the time on stage. Other drawbacks on opening night included some forgotten lines and slow pacing. A brisker pace would have been advantageous since this 90-minute show stretched to nearly two hours without an intermission.

Despite the flaws of both the play and the production, the play is definitely worth attending. The legal legacy of the civil rights’ struggle to use the law to bring social change should be the subject of constant reminders to all people.