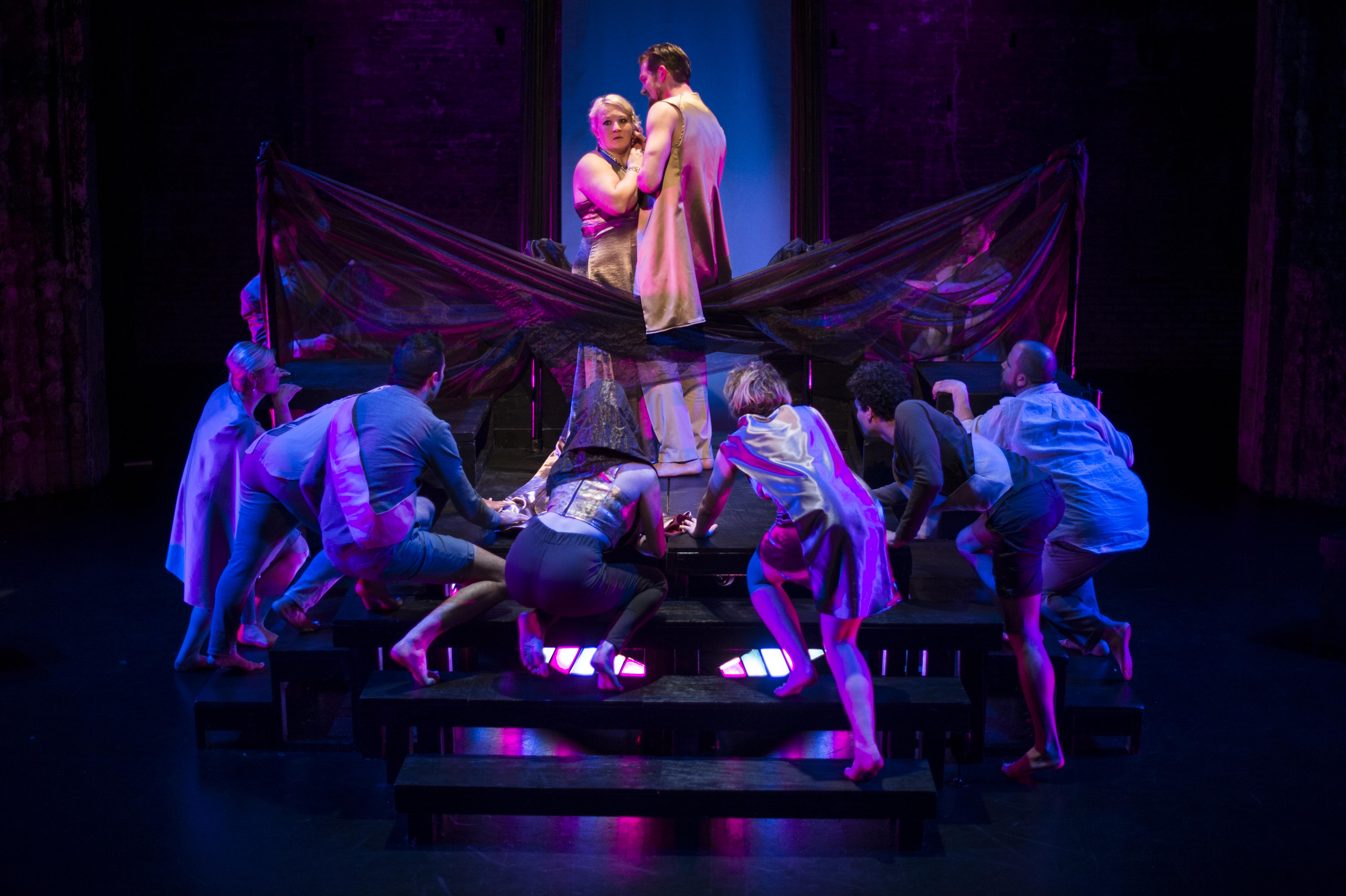 Jocasta (Laura Leffler-McCabe) and her brother Creon (Michael Ooms) are being stalked by Jocasta's past, present and future all at once in the trippy Oedipus riff These Are The Men from Savage Umbrella; photo by Carl Atiya Swanson

It’s tough being Jocasta (Laura Leffler-McCabe).  Sure, you’re the queen of Thebes, but when your husband Laius (Daniel Ian Joeck) goes to the Oracle at Delphi (Hannah K. Holman) and gets a prophecy, it can seriously muck up your family planning.  The Oracle tells Laius that his as yet unborn son will grow up to kill his father (Laius) and marry his mother (Jocasta). What is Laius supposed to do?  When a boy is born, you take him from his mother’s arms, hand him off to a shepherd (Foster Johns) and order the man to leave the baby on some far off hillside to die.

“Nothing good can come from knowing the future.”

The baby instead is left in care of a childless couple who raise him to be a young man named Oedpius (Nick Wolf).  But when Oedipus, not knowing he’s adopted, receives the same prophecy that he will kill his father and marry his mother, he runs away from the people he thinks are his parents – and instead runs right into the people who really are his parents, and the whole thing plays out anyway.  Oops.  That’s Greek tragedy for ya.

“It’s as though I’ve been here before.  It’s as if I’ve always been here.”

Savage Umbrella has turned the whole Oedipus legend on its head with their latest ensemble created production These Are The Men.  It might just as aptly be called This Is The Woman because this retelling is focused on the story through Jocasta’s eyes.  And a very non-linear sort of retelling it is.  Jocasta has become unstuck in time.  Her past, present and future are all jumbled up together.  One moment she’s dealing with her less than ideal, less than gentle first husband Laius, the next moment she’s tangled up with her more affectionate second husband Oedipus.  Nothing wrong with a husband young enough to be your son, unless of course he is your son.  Careful there, cougar.  One minute she’s having her new baby boy taken from her to be sacrificed to avoid the fallout of an unfortunate prophecy, the next minute she’s navigating the challenges of being a mother of four children – two girls, Antigone (Alana Horton) and Ismene (Heidi Jedlicka Halvarson), and twin boys Polynices (Mason Mahoney) and Iteocles (Russ Dugger).  She’s being harangued on one side by the the blind prophet Tiresias (Lisa Brimmer), who also knows her unfortunate future, and outmaneuvered on the other side by her own brother Creon (Michael Ooms), a most adept political animal who still can’t bring himself to like his sister’s second husband Oedipus because, hmmm, something’s not quite right there.  Throw in Siddeeqah Shabazz as Oedipus’ adoptive mother Merope, as well as a couple of gossipy servants, Irene and Agatha, and you’ve got quite a broad canvas on which to unfold your crazy, mixed up, disjointed story.  No wonder Jocasta drinks a little too much in act one.

By scrambling the narrative aggressively in act one, Savage Umbrella co-writers Blake E. Bolan (also the project’s director) and Laura Leffler-McCabe (the doomed leading lady of the story) get to introduce all the characters at once, providing each of them with an equal chance to capture the audience’s imagination and make an impact.  They are all important to Jocasta, for better or worse, so it’s good the audience doesn’t need to feel rushed in getting to know them by a late introduction.  Having introduced all the players in the first half, it gives the second half an opportunity to breathe with longer scenes and more meaningful interactions between characters.  The broad strokes of the first half get filled in with the finer details in the second.  The other nice thing about this strategy is that it gives the Oedipus novices in the audience plenty of opportunity to learn the contours of the story landscape, and the Greek mythology junkies plenty of inside “jokes” tucked inside the nooks and crannies of the tale. Watching the twin brothers slowly grow apart, for instance, has broader implications beyond These Are The Men’s story.  Things that seem like throwaway lines such as “Antigone, go dig the grave” or “Is Antigone going to die?” can cast a long shadow depending on the angle from which you see them.  This is where the ensemble created theater approach pays off – each character, no matter how “small” or incidental, gets a significant history, past, present and future built for them, because it isn’t just one or two people carrying the whole intellectual load of fleshing out the production.  It takes a village (maybe two) to build a tapestry this intricate.  Bolan and Leffler-McCabe worked with the current ensemble cast as well as dramaturg Megan Clark, and a whole crew of additional performers who took part in a summer workshop process last year (Neal Beckman, Lisa Marie Brimmer, Megan Clark, Tanner Curl, Joy Dolo Anfinson, Emily Dussault, Eric Elefson, Kathryn Fumie, Joe Halvarson, Theo Langason, Derek Lee Miller, Paul Rutledge, and Gwethalyn Williams) (dang).

How much does a person control their own fate?  And if you find yourself in the middle of a horrible situation, is it better to torture yourself about it and wail and moan, or to try to make the best of it?  If you don’t know you’re making a mistake, does it still count as a mistake?  Is all love a good thing, or is some love wrong?  Jocasta transforms into a remarkably good sport about the sick joke the universe is playing on her heart.  The audience may find itself in the strange position of rooting for an incestuous couple to find a way to make things work.  The reason for Jocasta’s final fateful decision and her instructions to Oedipus make what follows seem almost noble.  It also fits neatly into the pre-existing narrative of the legend, allowing them to give all players in the story more depth and humanity without twisting the mythology into something beyond recognition.  It’s a neat trick, and not easily done, so my hat’s off to all the collaborators on that score.

“Let me take you somewhere.  It is not a place you will like, but you will find it useful.”

Jumping around in time also gives the play an opportunity to present a happy ending.  Because, spoiler alert for beyond the play, this entire family is screwed.  But Jocasta allows herself to revisit what was perhaps the happiest day in her life – her wedding day to Oedipus.  From a storytelling standpoint, is that cheating?  I honestly couldn’t tell you.  I’ve been arguing that one both ways in my head ever since the lights came up after the show was over.  In the moment, if you’re happy, that still counts, right?  No matter what comes after?  If you have a loving husband, if you create a family of smart capable children, that’s always a net positive. Right?  These Are The Men has no easy answers.  It almost demands you continue to juggle both sides of every question.  It’s an intriguing way to reinvigorate a centuries old story.