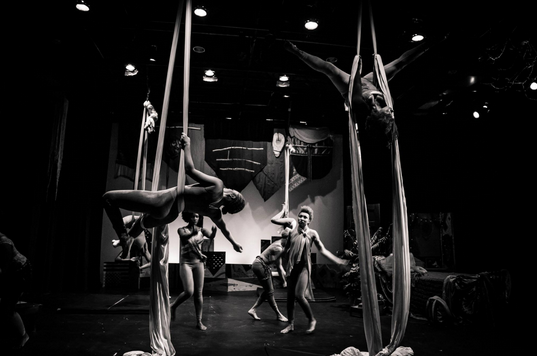 This past weekend, Free Black Dirt presented There Are Other Worlds a play written and directed by Junauda Petrus and produced by Erin Sharkey (these two form the core artistic team of Free Black Dirt). The work premiered as a work in progress at Open Eye Figure Theatre in 2013 and returns in 2015 as a fully realized play at Intermedia Arts in Minneapolis, MN.

I have been carrying around this quote by Toni Morrison.  “So Ralph Ellison writes ‘Invisible Man’ and as good as that book is, I have to ask, invisible to whom?  Certainly not to me.”  She is talking so succinctly about gaze, the white gaze, the male gaze and what it means to make art and for whose gaze.

Junauda Petrus’s play There Are Other Worlds is the flip side to this question.  The play is clearly written with a black female gaze in mind.  The entire cast are women of color and the power and beauty present in this play comes from that root and love of Black Women. That the rest of us are invited to witness and imbibe is a gift and we are all stronger for it.

I saw the play on the closing night after six sold out, standing room only performances. Such a response speaks to the fact that there is an audience eager and willing for this kind of work.  On the political face of it we might merely say how important it is to support an emerging black woman playwright but this is art and what really matters is the actual work.  There are Other Worlds is good theater.

The play uses movement, aerial arts, more traditional scenes of dialogue and a vast soundtrack that both grounds the play in the late 1990’s with hip-hop of the time and spans time with music from other eras as the two young women, Dreamah and Sarya explore current music and also discover Sun Ra, Ornette Colman and other jazz greats.  The original soundtrack created by Sarah White along with the use of aerial arts takes the play outside the day to day and into the universe/spirit realms.

Joy Spika and Jordan Hamilton designed the set which is beautiful and layered.  Tree branches, paper lanterns and mask like wire sculptures hang from the ceiling.  One side of the stage is the bedroom of the teenage daughter Dreamah and is overflowing with rich color and vibrancy.  The other side of the stage is stark with a yoga mat and pile of books and serves as the jail cell for Ameri.  The stage also holds four location for the long white silks on which the women swing, climb, float, cocoon and spin doing aerial work.  The rest of the set design is beautiful, evoking stars and cosmos and quilts and mathematical calculations but was wisely abstract enough to open up the worlds that were being created.

The play centers on the frayed relationship between Ameri Akenyemi who has been in prison nine years and her two young daughters, the teenage Dreamah and the young adult Gospel.  It also revolves around the transformative relationship between Dreamah and the wildly openhearted, Sarya Rice.   Also present are ancestors, a group of talented dancers dressed in purple who appear and disappear; never speaking but evoking, dancing and at times literally holding up characters.  Although never on stage fathers are also a strong presence with Ameri’s husband who is trying to hold and protect his daughters and Sarya’s father who she is painfully separated from as he deals with mental illness.

The cast is universally strong. Nisreen Dawan as the incarcerated mother Ameri Akenyemi was effortless as both a young revolutionary falling in love with a caring man in college and as a 45 year old woman in prison, taken from her husband and daughters and trying to stay whole as one can in those circumstances.

ShaVunda Horsley as Dreamah Akenyemi carried a good deal of the play forward.  Her skill was apparent at being able to play Dreamah as young and innocent but not a caricature of youth.  The arc of her characters transformation and path back to her mother and new found strength was both believable and moving.

Felicia Perry played Gospel Akenyemi the slightly older and angrier sister and had some of the most challenging scenes both in terms of aerial work and drama.  She is a riveting presence on stage and held the sense of anger and suffering without over acting it.

Alissa Paris played Dreamah’s new found best friend Sarya Rice and had several scene stealing moments.  Her kinetic energy and joyfulness were an important part of the play both soothing some of the pain and leading Dreamah forward.

All of these strong performances are in service to a beautiful script by Junuada Petrus that is multilayered and complex full of humor and a natural ear for dialogue especially between the two young women Dreamah and Sarya.  Without being preachy the script touches on a variety of intense issues around revolution and social change, white supremacy, living in a predominately white place, prison, rape, forgiveness, strength and love.  So much love.  The love of this mother for her children, the love of these young women for each other, family love, love of and love from ancestors, love of Blackness: as a people, as a source of beauty, creation and resistance.

The use of aerial work was a perfect sister to the writing; the long silks were utilized by various characters and served as trees, wombs, and facilitated various journeys both physical and spiritual the characters embark on.   Junuada Petrus wrote in the program about wanting to see more women of color involved in aerial performance and also her inspiration to use aerial as a reclaiming of Black and Brown bodies suspended in space from the horror of lynching.  All but one of the actors were new to aerial work and the confidence and trust they had in their own bodies to climb essentially a long piece of cloth and wrap themselves in it and then unfurl often to the ground was beautiful to watch.

There were two interconnected things I wanted that were not present.  More breath and silence and to see Ameri engaged in her yoga practice. This would have provided a few moments of that pause or silence.  It was such a rich play that I wanted a breath here and there to regather the energy.

The one experience I had that was puzzling was the applause after each scene.  I’m not really sure why it was happening and I talked to someone that attended on Friday night and had the same experience and a similar response. While applause or vocalizing can be an important role for the audience it needs to spring from seeing something particularly moving, fabulous or resonate.  It did not always feel spontaneous but more rote, almost condescending to the actors and the play as if they needed constant reassurance that it was good.

It was refreshing to see a play where ancestors, the spirit realms and indeed other worlds were a part of the reality.  We experience this strongest through Dreamah who at first is skeptical but also curious about other realms and through Sarya who is open to all of it and inviting Dreamah to explore.   In the scene where Dreamah leaves her body and is held up, carried by the ancestors to reconnect with her mother and sister we see theater as ritual at it’s best.  When she comes back into her body and into the room she turns to Sarya and asks, “What was that?”  Sarya replies, “I don’t know. YOU?!”  It was a beautiful moment and I felt a collective gasp from the audience.

When it is revealed Ameri killed a young, white, affluent man who had raped Gospel the scene is devastating.  The two daughters sit on the ends of the long silks used for aerial making a huge X across Ameri as she recounts the tale.  Dealing with rape in theater is tricky and I have seen many cases where over theatrics actually distances the audience from the reality of it.  This was not the case here.

Ameri speaks of the world she and her husband were working hard to help bring into being for their daughters and all children. She speaks to the shattering pain of this violent act and of being separated from her daughters.  She speaks to the reality that this man with privilege could have very easily slipped away without going to prison; as we know so many rapists have.  Whatever her choices in that moment Ameri’s commitment is to her daughters, her husband who it is indicated has continued to love and support her through everything and still to a world worthy of her daughters.  Whether Ameri made the right choice is left open. Because there really is no answer to that and the fact is she did it and is in prison.  Whether she should be in prison for her choice is the real question that opens up so many questions about who is incarcerated and who is not.

It is also Ameri who delivers I think one of the most profound lines in the play.  She is discussing her yoga practice in prison and she describes learning about the Sanskrit word Ahimsa, which she said was defined many different ways but the way she read it was non-violence and to do no harm, not even in your thoughts.  To this she replies (I am paraphrasing her line)  “I just about fell out when I read that.  I thought who ever came up with this idea never tried to live as a Black person in America.”

There Are Other Worlds does not shy away from the pain of living in a country where we still need a movement based in the idea that Black Lives Matter.  But Junuada Petrus’s play and her amazing cast are also living, breathing, loving in their bodies, in their pain but in their beauty, strength and vision too.  It is the kind of theater we all need for our beautiful, troubled world.  I look forward to more work from Free Black Dirt, from Junauda and all the talented, lovely, fierce women that brought this work into being.  Check out Free Black Dirt at http://www.freeblackdirt.com/

Ellen Marie Hinchcliffe is a poet, filmmaker, performer and loving Auntie and Mama.  More at www.fierceshimmer.com