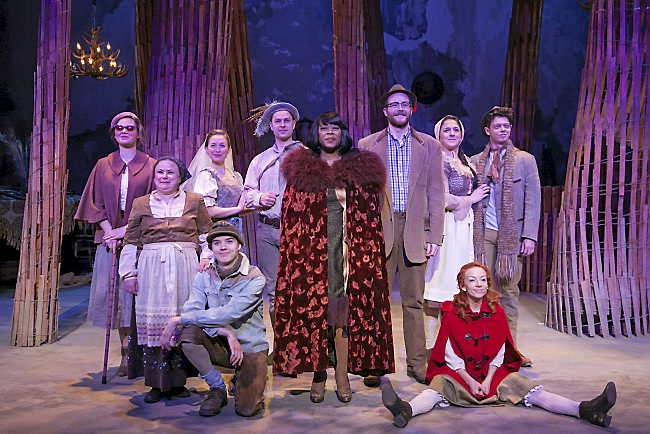 Just go. There is no reason not to go. Honestly, nothing I’m about to write regarding Theater Latte Da’s production of Stephen Sondheim and James Lapine’s Into the Woods is going to be aimed at anything other than encouraging you to go. It’s fun. It’s amusing. It’s romantic. It’s smart. It’s sad. It’s everything a good piece of musical theater should be.

Granted, I had a pretty low set of defenses against this one to begin with. I came late to musicals. They were nice enough, but I didn’t take them seriously. Stephen Sondheim was my gateway drug to the rest of the musical theater pantheon—both classic and obscure. I’m still not a connoisseur by any means. But I appreciate musicals a lot more now in general because Sondheim and his various collaborators got me started. For reasons to be revealed in a moment or so, Into the Woods is one of my favorites. (Although no, I haven’t seen the movie yet. I was holding off to see this production first. I wanted to enjoy the theater version one last time before the movie started mucking with it in my head.)

“And though scary is exciting, nice is different than good.”

Add to that, we live in a city where if you’re very lucky, you can get Greta Oglesby to play the Witch. If Into The Woods itself weren’t enough to get you to go, Greta Oglesby certainly should be (and she doesn’t disappoint—that voice of hers remains amazing, and it’s a lot of fun watching her act in this cheeky story when she’s not singing.)

“To wish and wait from day to day will never keep the wolves away.”

Then there’s David Darrow, of course, as the Baker. Just like with Oglesby, I’ll sign on to be in the audience of pretty much anything Darrow’s involved with, even though that’s sometimes meant sitting through some questionable theater. But even when the vehicle was less than stunning, Darrow always delivered. He makes you think better of a play because of his devotion to it. To get to see him in something genuinely great, and get to hear that singing voice of his in the bargain, well, that’s it, I’m pretty much done.

“Stay with me. The world is dark and wide.”

Director Peter Rothstein and Musical Director Jason Hanson have gathered a whole ensemble of voices I’ll now look forward to hearing again elsewhere (and am quite frankly perplexed I managed to miss up till now)—Kate Beahen as the Baker’s Wife; Shinah Brashears as Little Red Riding Hood; Britta Ollmann as Cinderella; and Brandon Brooks as Jack (of Beanstalk fame), and that’s just for starters. Even they don’t have the same kind of showstoppers in their song lists as the others touched on above, Dan Hopman as the Narrator, Elisa Puhar as Jack’s Mother, Kendall Anne Thompson as Rapunzel, and Peter Middlecamp as both The Wolf and Cinderella’s Prince all make their own indelible imprints on the story with less flashy material. (Though to call any of the music here “less flashy” does it a disservice that’s not my intent.) Everyone here’s so uniformly wonderful to listen to, it’s hard to figure out where to begin unpacking it all to discuss it.

“If a prince were looking for me, I certainly wouldn’t hide.”

Into the Woods is an unlikely favorite for me. The idea of taking fairy tales and putting them to music, and then to put a “modern” spin on exploring the stories—it could all go horribly wrong so easily. The likelihood the whole thing could be unbearably sweet and unrealistic, or at the other extreme unrelentingly dark, or instead just plain old garden variety pretentious—many have crashed on these kinds of obstacles with this material before, and will again. It’s too tempting as subject matter to leave alone. People tear it down, people build it up, people pontificate all over this territory. It’s easy to forget how hard this juggling act is that Sondheim and Lapine pull off here. They make it seem almost inevitable that they’d succeed, when it’s far more likely they’d just faceplant on this one. One of the best ways to send me running in the other direction? Call something “A Fairy Tale For Adults.”

“It’s the witch from next door.”

Lapine’s book and Sondheim’s songs take the stories of Cinderella, Jack and the Beanstalk, Rapunzel, and Little Red Riding Hood and weave them together around the unraveling of a Witch’s curse that is preventing a Baker and his wife from having a child they so desperately desire. The fact that everyone seems to get exactly what they want (or deserve) by the happily ever after conclusion of act one often leaves some audience members puzzled. Wait? Is it over?  What else is there to explore after we get our happy ending? Why, the consequences, of course. When a lady giant comes stomping around looking to avenge the death of her beloved in act two, everything starts to get scrambled.

But things are also subtler than that. What if the witch gets her own personal curse lifted, but ends up losing two of the things she loves as a result? What if Cinderella never really gets used to the opulence of palace life? What if a prince is conditioned to just keep looking for the next romantic challenge, rather than settle into a happy married life with a single damsel? The fairy tale characters become so genuinely human that you forget their iconic status and become invested in the rising and falling of their fortunes just like any other people presented on stage. The light touch involved in making this whole thing work and not tip wildly in one direction or another as it barrels to its conclusion never ceases to amaze me. It’s brilliant precisely because of how easily you can get swept up in it without even realizing it.

“I thought you were dead.”
“Not completely.  Are we ever?”

Latte Da’s production doubles down on the economy of the whole thing by presenting it with an equally light touch. No brightly colored fairy tale castles or artistically gnarled trees here. Nope, instead there’s a feel of a decrepit German beer hall around the edges of the whole thing, and much of the rest of Kate Sutton-Johnson’s set design consists of twisted towering pillars of snow fencing that stand in for (or fall as) trees. Jason Hanson has streamlined the musical’s score down to something that can be performed by just three musicians—himself on piano, Ryan Golden on winds, and Diane Tremaine on cello—and yet even with that simplicity, it has all the melodic power you could want. The cast themselves are often doubling or tripling roles: Middlecamp takes a cue from the second half of his name and camps it up as Cinderella’s wicked stepmother; Brashears and Thompson are also Cinderella’s stepsisters; Beahen does a lovely understated turn as the spirit of Cinderella’s dead mother; Brooks also plays the frighteningly practical Steward to Cinderella’s Prince Charming; Darrow works up some goofball charm as Rapunzel’s frat boy prince; Hopman is perhaps even more key to the proceedings as the Mysterious Man (no spoilers from me) than he is as Narrator; and Puhar has great fun as Red Riding Hood’s vengeful Granny who intends to get a little of her own back from the wolf.

“The way is clear, the light is good.  I have no fear, nor no one should.
The woods are just trees, the trees are just wood.”

Latte Da may not be going for the full sprawl of Into the Woods’ epic cast of characters or serving up a big visual flourish with its fairy tale world, but I never felt cheated. There’s no way that with songs this good, a story this delightfully twisted, and voices this strong that Into The Woods could be anything but a great big success.

“There are giants in the sky.”

Just go already. Into the Woods is a treat. And we all deserve this kind of happy ending (only single entendres intended).