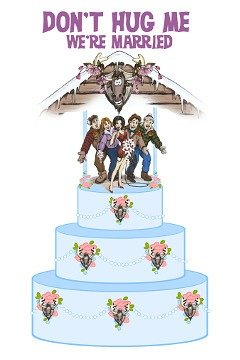 Aristotle described three primary forms of theatre in his Poetics: comedy, tragedy, and the satyr play. Although the mediums, varieties, and forms of theatre have expanded in the intervening millennia, the conceptions Aristotle recorded remain surprisingly valid in describing today’s theatrical entertainments. (See, for example, this video exploring the Aristotelian conception of the tragic hero in Star Wars.) Don’t Hug Me, We’re Married, now playing at the St. Croix Off Broadway Dinner Theatre in Hudson, WI, is a satyr play.

If this distinction sounds stodgy and intellectual, fear not–a satyr play is exactly the opposite. They are bawdy, funny, frequently laced with drunken escapades and sexual references, and stuffed with pranks, sight gags, and situational humor. All of these are overflowing in Don’t Hug Me, We’re Married, the fifth installment in a series of musicals by Phil and Paul Olson. This is not the sort of weighty theater that you might expect at, say, the Guthrie–at least not unless it was a few centuries old, first–but the kind of lighter entertainment perfect for relaxing after a stressful day.

The story of DHMWM is set in the small, fictional town of Bunyan Bay, Minnesota, somewhere near Canada and a fair-sized lake. The characters are all locals, and many of the jokes play off the rhythms of this rural setting and the options available to them. Since two thirds of the characters are trying to get married–not necessarily to people who reciprocate their affections–and the town’s population isn’t exactly large, the tension between scarcity, settling, and holding out for one’s dreams is heavily mined for humor. So is the double-casting of Jason Decheine as the feuding brother and sister pair Gunner and Trigger Johnson, who aren’t on speaking for terms for reasons that you might be able to guess. Gunner’s wife Clara (Stephanie Osman) tries to revive their stagnant marriage just as the other characters try to rush into matrimony.

Decheine and Osman make a strong showing as long-bound, comfortable-ish married partners, but some of the best chemistry (not necessarily attraction) comes when Decheine slips back onstage as Trigger to try and seek/extort/intimidate various cast members into wedlock. The romance between Bernice Lundstrom (Lydia Olson) and karaoke machine salesman Aarvid Gisselsen (Joe Keith) is the natural match, at least as far as personalities go–rival Kanute Gunderson (Michael McKay) begs to differ in terms of money–but wrench after wrench gets thrown in the works for comedic effect. Kanute’s relationship (let’s just call it complex) with Trigger is a major source of humor and Decheine’s bawdy portrayal of the Johnson sister produces much of the satyr humor. There’s also a crazy bachelor party, a game of oneupsmanship, and a mosquito epidemic to complicate things.

None of the songs of DHMWM are showstoppers, but they accent and intensify the action decently and are filled with amusing jokes. Those from smaller towns and rural areas will especially appreciate some of the humor and recognize some of the character personalities, but even if they’re not friends and neighbors they’re a lot of fun to laugh at.