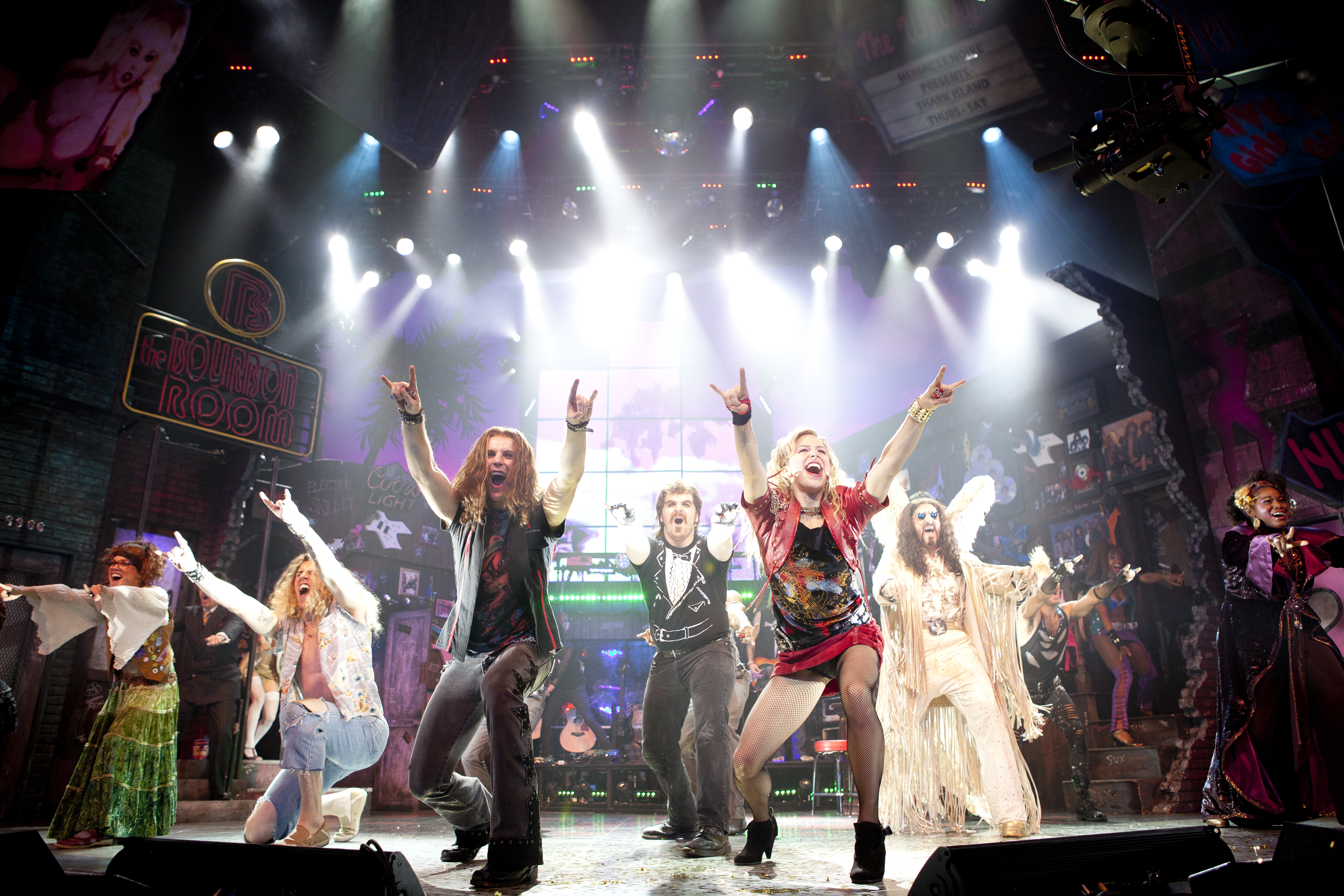 My understanding of the 80s is mostly constructed by the stereotype of the era—growing up Carebear-obsessed didn’t gain me much perspective outside of what was happening in Care-A-Lot. Yeah, I know all the songs I’m supposed to and the style just like everyone else. And while Friday, May 17th’s performance of Rock of Ages didn’t show or tell me to anything non-cliched about what it was like to live in the 80s, I concluded that—between the crass tongue lappings, booby jokes, and repulsive hair styles—it was just simply a gross time. That probably wasn’t the consensus in the midst (is it ever?), but it certainly seems to be now.

The premise of Rock of Ages is incredibly cheesey, but that’s the point. The 80s is easy to parody—that much was clear based on the hordes of audience members dressed in their neon leopard-print leggings and leather cuts. Rock of Ages is a love story about a small-town girl and a city boy, and culminates in, you guessed it, “Don’t Stop Believin'” by Journey. Wolfgang Von Colt (aka Drew) (Dominique Scott) wants to be a rocker but struggles with his identity—that is until he meets Sherrie (Shannon Mullen), an aspiring actress from Kansas who resorts to stripping to make ends meet. The two are presumably in love, because without romance there’s no story! In the end, they abandon their dreams and decide that being with each other is their new dream. There is of course a villain in the form of a German developer named Hertz (Philip Peterson) who wants to tear down Bourban Room (their seedy hangout) in Los Angeles in an effort to clean up Sunset Strip’s image. Hertz’s son, Franz (Stephen Michael Kane), is a fan favorite and brings a certain uniqueness to his otherwise type-casted role.

And there’s Lonny (Justin Colombo), the self-proclaimed narrator of the show, who constantly breaks the fourth wall; he’s crass, but not in an unlikeable way. While his role is to be the funny guy and keep the audience in stitches with his predictable humor, he provides critical commentary of the era and story itself. Rock of Ages is aware of how corny it is, but it can get away with it because of the music.

The show, for better or worse, is a crowd pleaser. The first act concludes with Whitesnake’s “Here I Go Again” and had people bouncing in their seats. The second act ends with “Don’t Stop Believin'” and the house suddenly sounded like a college bar on Karoakee night. It was admittedly hard to idly watch songs like “Wanted Dead or Alive” being danced to and sung on stage (shout out to Marcos Sanatana’s choreography). The actors wanted it to be like a concert (Dominique Scott asks for people to throw their panties on stage in his bio), but that is impossible to do at the Orpheum.

Rock of Ages is only here through the weekend. You don’t have to worry about not being familiar with the songs like you do with other musicals, but the a very musical theater take on rock ‘n roll afterall. Some of the songs were mash-ups, which worked for the most part, and were cleverly worked into what was happening in the plot. But it was frustrating at times to not hear only portions of certain songs like “Renegade” that only got a couple lines of glory. Regardless, I couldn’t help but be entertained.