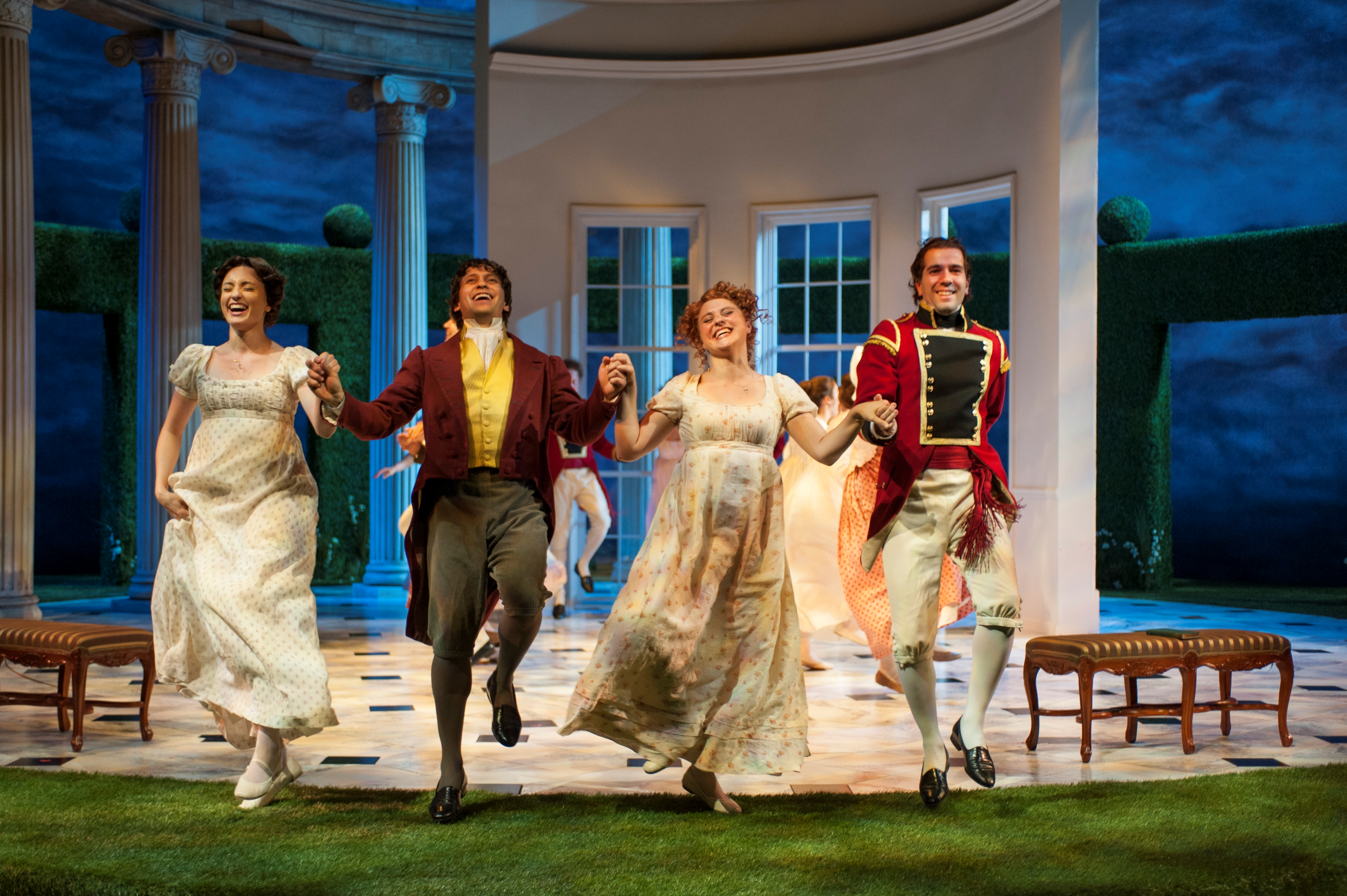 Jane Austen is revered as being an author and woman ahead of her time; her biting social commentary and gumption made her romantic novels something we still value today. Pride and Prejudice opened at the Guthrie on Friday, July 12 and the Wurtele Thrust Stage was filled with fans of her most famous work. Pride and Prejudice is one of those books that people seem very protective of; if it’s changed too much or something is left out, then it’s just not the same and can’t truly be enjoyed. Like seeing the movie before reading the book, I had no preconceived idea and enjoyed the wit of Pride and Prejudice very much.

Pride and Prejudice is centered on Elizabeth Bennet, the second eldest of the Bennet women. Mrs. Bennet is all-consumed with marrying her daughters off to wealthy, agreeable men. The plot is a familiar one, so I’ll spare the details. It follows your typical romantic-comedy structure: there are a girl and a guy who butt heads, have a misunderstanding, become antagonists, and finally acheive resolution in the form of love. Since Pride and Prejudice is an original rom-com, though, there’s no real feeling of cliché in the plot.

Vincent Kartheiser as the misunderstood Mr. Darcy is best known for his role as Pete on the AMC series Mad Men. Kartheiser’s got that air about him as Pete, just as Mr. Darcy does. Slap a British accent on him and Kartheiser plays an effective Mr. Darcy. As my friend pointed out, though, “He’s no Colin Firth coming out of a pond.” Mr. Bennet is a crowd favorite and Peter Thomson fell easily into that role. The cast as a whole did their part, so to speak. Suzanne Warmanen as Mrs. Bennet was shrill, Aeysha Kinnunen as Lydia Bennet was smug and annoying as the 16-year-old she is, Kris L. Nelson as Mr. Collins was funny in his smarmy elitism, and Ashley Rose Montondo as Elizabeth Bennet was confident and clever, and made you want to be her best friend. The lacking element in the cast was the chemistry between Kartheiser and Montondo, which didn’t sear like it did in the Hollywood movie. The set design by Alexander Dodge served as the perfect complement for the performance—the focus stayed on the characters, but the rotating floor and overcast backdrop gave Pride and Prejudice that scenic, English aesthetic.

Having not read Jane Austen’s Pride and Prejudice, I think I was at an advantage for enjoying the Guthrie’s take on the classic fully (directed by Joe Dowling). It was, apparently, lighter than the book and focused on the humor instead of the politics of Austen’s message. As it goes for any beloved classic, there’s pressure to get it right. The play is an interpretation of the novel of course, but still the work has to embody the original piece. The Guthrie’s rendition is a good one as far as capturing the comedy. It’s certainly enjoyable, but with comedy at the forefront, the real guts of the masterpiece are overshadowed.