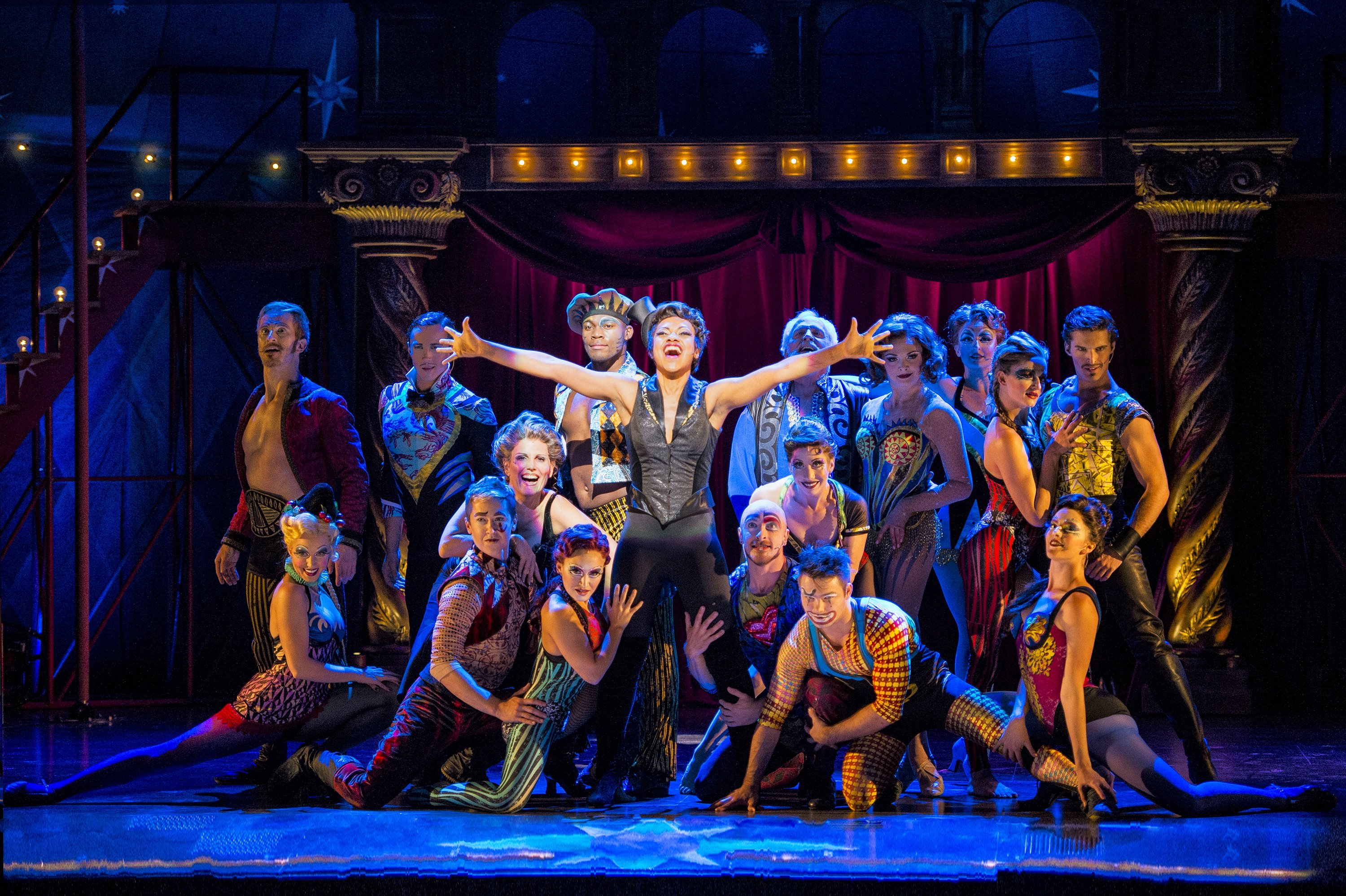 Sasha Allen and the touring cast of Pippin.

Not many shows bristle with the same visual joy and spark as the Broadway tour of Pippin, now playing at the Orpheum Theatre. Of course, not many shows are set under a circus tent bristling with acrobatics, tumbling, knife throwing, hula-hoops, trapezes, and yoga balls. Yes, you read that right—yoga balls; 6 of them, as a matter of fact, and 15 hula-hoops as well. Want something more like Vegas? How about 7 giant feather fans being sensually waved, or flaming torches if that’s more your thing?

The original Pippin made quite a spark when it premiered in New York City back in 1972, with a pile of awards and an exceptional 5-year run. After the inaugural Broadway production closed, the show became a staple of high school theatre, with all the attendant associations that this familiarity might breed. Before long, a quarter century elapsed before Pippin returned to Broadway by way of Boston (well, Cambridge, MA if we’re being specific). Director Diane Paulus’s solution to this familiarity-breeds-contempt issue is a radical break with the show’s traditions, re-envisioning it as a dazzling, high-energy circus spectacular. The result garnered 4 Tony Awards and is currently gracing Hennepin Ave.

The story of Pippin is a loosely historical fable about one of the sons of Charlemagne the Great, staged as circus show within a show. The titular Pippin (Sam Lips) tries to find his purpose in life through, well, many experiments with excess living, guided by the ringmaster Leading Player (Sasha Allen). The rest of the story is not worth spoiling; the substance of this show is mostly in the pairing of solid vocal performances with eyebrow-raising choreography, jaw-dropping stunts, and a pleasant excess of feats of acrobatics and athleticism. If Cirque du Soleil has set circus expectations up a notch, Pippin meets them with flair.

Don’t come late to this show—the opening number, “Magic to Do,” is one of its most stellar tours de force. A grandmotherly sizzle (yes, you read that right) is provided by Priscilla Lopez as Berthe in “No Time At All”, rivaling the delightfully over-the-top vamping of Sabrina Harper as Fastrada in “Spread a Little Sunshine”. By the time that intermission rolls around, there’s enough momentum that many people would happily plow on to Act II without pausing—though the sheer applause for “Morning Glow” at the conclusion of the first half certainly needs some time to die down.

An unusual feature of this particular staging is that it features some effects that outshine its original production. The use of fire on stage would make a Boston or New York City fire marshal cringe, but here in the Twin Cities real flames ripple through the air onstage. There’s nothing quite like the real thing, and it’s just one of the marvelously extravagant pieces of eye candy. Come for the acrobats, stay for the singing, and relish the surprises in the dancing.