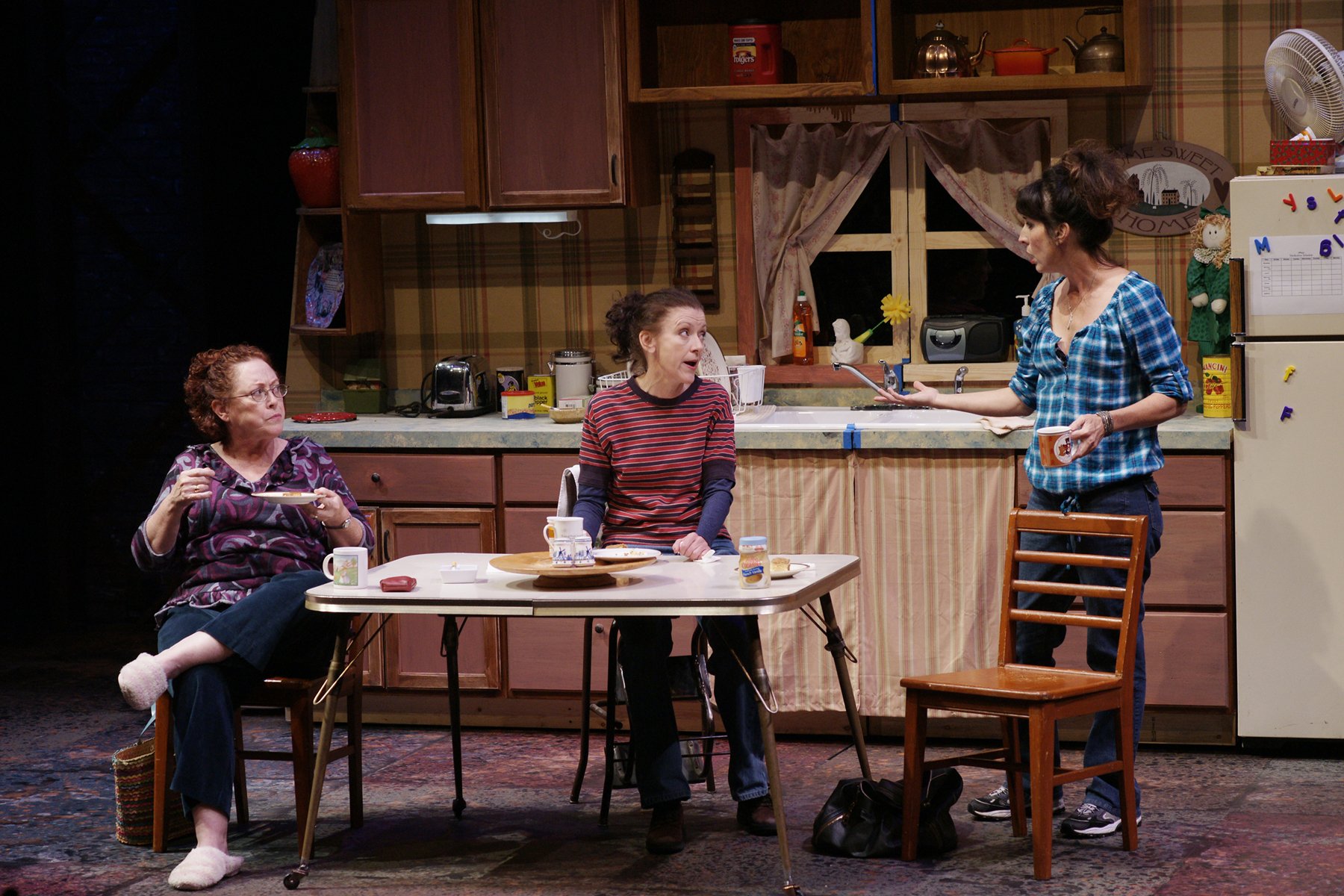 Shades of Arthur Miller’s Death of a Salesman underlie the opening scene of Good People. Like Willie Loman, the central character, Margie, is being fired by a manager: a young man that she has known since he was a baby. Margie is a 50-year-old mother of a severely disabled adult daughter and her daughter’s care needs result in her chronic lateness. Despite her pleas, Margie loses her $9.15 an hour job as a cashier at a dollar store. The job wasn’t much, but it was all that she had to pay for rent and food. It’s the recession and she can’t find another job. Unlike Willie Loman, Margie does not look at suicide as an option, but her growing desperation to financially survive provides the vehicle for examining issues of class, destiny, and decency.

Park Square Theatre’s production of David Lindsay-Abaire’s Tony award nominated play is a captivating show that effectively reveals the multiple levels of this play. Virginia S. Burke contributes an endearing portrayal of the spunky but increasingly desperate Margie. Margie lives in South Boston, known as “Southie.” She was born there and will probably die there; she just hopes it won’t be on the streets. Her friends are Jean, played by Angela Timberman, and Dottie, played by Jane Hammill. Dottie is also her landlord who may or may not let her continue living in her apartment if she can’t make her rent.

Margie and her friends decide she should seek help from an old boyfriend named Mike. James Denton plays Mike, a Southie who is now a well-to-do physician who lives in the elite suburb of Chestnut Hill. Margie describes Mike as “good people” and hopes he will help her—but when he repeatedly ignores her calls, she forces her way into his office and then shames him to invite her to a party his wife is having at their Chestnut Hill home. When he cancels the party to avoid having her come, she comes anyway; she is greeted by his much younger, African-American wife who is very gracious in contrast to Mike’s repeated efforts to get Margie to leave.

Although director Joel Sass emphasizes the comedy in the show, when the show gets dramatic, it is searing. Strong acting is seen throughout; Burke clearly carries the show since her character is in every scene, but in the second act there is a nice turn by Hope Cervantes as Mike’s wife. Denton appears stiff in the first act, but once his character starts to act his Southie persona, his acting gets intense.

The best comic scenes occur when Margie hangs out at the bingo parlor with her friends Dottie and Jean, along with the uncomfortable Stevie (played by Sam Pearson) who fired Margie. Burke, Hammill, Timberman, and Pearson have wonderful ensemble timing in these scenes.

Although a lot of the play’s emphasis is on the class distinctions between the working and affluent classes in this country, its most provocative themes revolve around the issues of destiny. Is Margie’s meager lot in life due to bad decisions on her part, or is it due to bad breaks and lack of parental support? Is Mike’s success due to his brains and hard work, or was it a matter of luck that he had a supportive father who prevented the teen-age Mike from beating to death an African-American teen who walked into Southie? Finally, can you decide to be a “good people”? The questions linger long after one leaves the theater, which is the sign of a very good play.