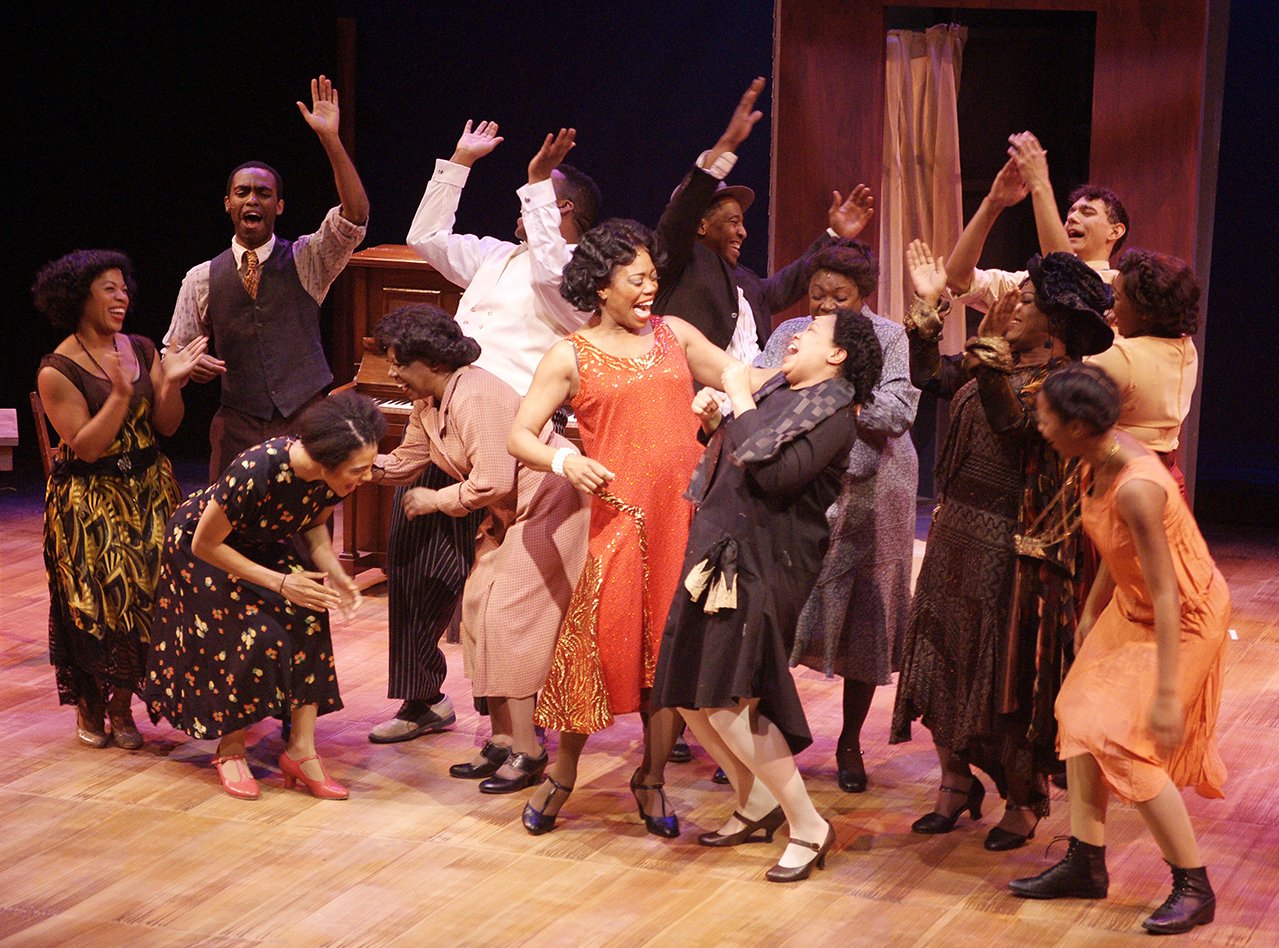 Park Square’s Theatre ambitious production of the musical The Color Purple creates an exuberant production that was well deserving of the standing ovation it was given on opening night. The musical is based on the Alice Walker’s Pulitzer Prize winning book of the same name. The book for the musical was written by Marsha Norman with music and lyrics by Brenda Russell, Allee Willis and Stephen Bray. In the regional premiere of the musical, Lewis E. Whitlock directs an exceptionally talented cast in a production that brings out both the humor and pathos of the story.

The story revolves around 40 years in the life of Celie, a black woman living in Georgia between 1909 and 1949. Celie’s story is one of woe. Sexually abused by the man she believed was her father, she gave birth to two children by the time she was 14 years old. Both children were taken from her and for most of life she did not even know if they were alive or dead. She is constantly told she is worthless and ugly and her only comfort is the bond between her and her sister Nettie. When Celie is forced into a physically abusive common-law marriage with an older man known as Mister (we later learn his name is Albert), who needs someone to clean his house and raise his children, she becomes separated from her sister. When Mister hides letters sent from Nettie, Celie spends decades not knowing the fate of her sister. But as depressing as this story sounds, it becomes uplifting when Celie meets Shug Avery, a jazz singer and a sometimes lover of Mister. She takes care of Shug who is in ill health and Shug makes Celie feel for the first time that she is someone who matters and who can be loved. When Shug gives Celie the letters from Nettie that Mister kept from her, the production soars with scenes alternating between Georgia and Africa where Nettie has gone to be a missionary and has Celie’s two children in her care. The production culminates with both Celie fully reclaiming her life and Mister redeeming himself from his sins against Celie.

The show’s large cast has so many talented performers it is hard to single out just a few. Aimee K. Bryant as the much put upon Celia is incredible and her singing of the ballad “I’m Here” is the most moving number in the show. Regina Marie Williams as the charismatic and free loving Shug Avery lights up every scene she is in, just as Shug lit up Celie’s life.  Jamaica Meyer as Nettie holds her own in terms of stage presence and singing, and she is a welcome return after her character disappears for half the show. T. Mychael Rambo as Mister masterfully plays with humor a character who is hateful but who eventfully achieves both redemption and forgiveness. Darius Dotch plays Mister’s son Harpo with both an innocence and charm. The Church Ladies who act as a Greek chorus throughout the production are played with strong singing and comedy by Ginger Commodore, Shirley Marie Graham and Sarnia Butler. But the biggest scene stealer in the show is Thomasina Petrus as Harpo’s wife Sofia. At times, Petrus only needed to come on stage to be the center of attention with her facial expressions and talented singing. Her leading the group in the number “Hell No” was the show stopping tune of the show’s first half.

The music for the show includes gospel, jazz, traditional African, Broadway type comical numbers and ballads. At times the mix seems too much of a mish mash. But there are many outstanding songs and both Gary D. Hines’ wonderful musical direction and the cast’s energetic singing more than makes up for the disjointed styles.

Seiti Jones set design is simple but complements the production well. Image projection is effectively use for the backdrop and facades of houses, dining tables or store counters are effortlessly moved in and out to suggest the shows fifteen different scenes leaving ample room for the large cast to dance and move.

This is a truly outstanding production with one of the most talented casts seen in the Twin Cities. Anyone looking for an uplifting evening of enthusiastic music, emotion and comedy should not miss this show.