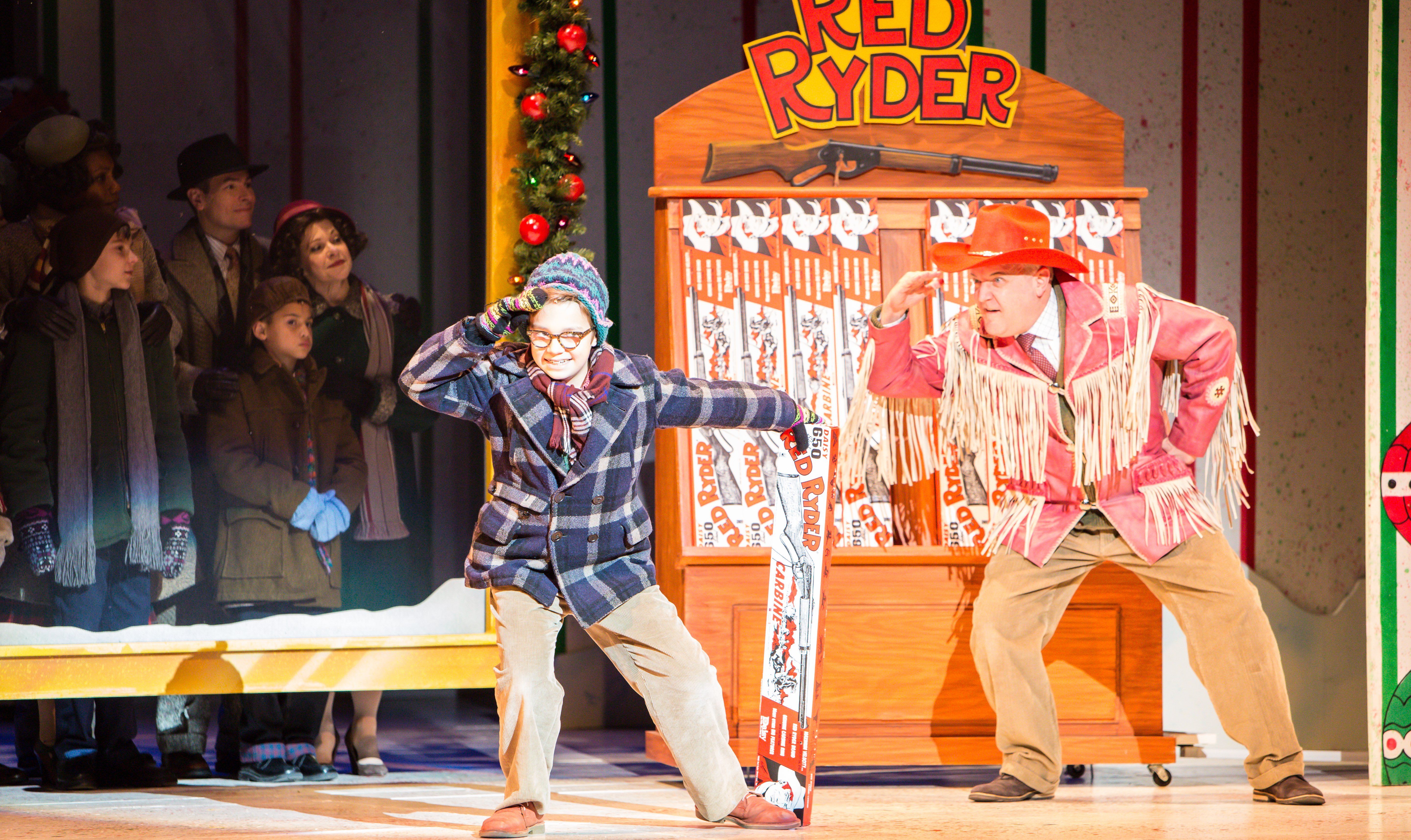 Ralphie (Jake Goodman, center) with the object of his holiday desire. Photo by Christian Brown.

Perhaps the best summary of A Christmas Story: The Musical comes from a couple’s exchange during intermission at a recent performance. “It’s so ridiculous!” said one. “I know, said the other. “And that’s why it’s so wonderful. I need to make all of my friends come see it.” If the volume of laughter is any measure, that performance’s audience wholeheartedly agreed.

In a year that has seen more than a few vapid screen-to-stage adaptations touch down in the Twin Cities, A Christmas Story is a breath of fresh air. It is, as one might expect, heavily influenced by its silverscreen source material, but moves with a rhythm that feels both perfectly natural and its own, and includes more depth than several of its counterparts put together. As the Ordway embarks on self-producing its own content, this show is a strong jump-kick and a very leggy lamp forward, competing very favorably against the touring musicals that it often hosts.

There are some adult leads in A Christmas Story, but for the most part the kids are where the action is at. The cast of children is mostly local and dashingly cute, especially with the delightfully over-the-top and campy “Ralphie to the Rescue” and the fantasy speakeasy of “You’ll Shoot Your Eye Out” (a musical hook that many will go home singing). Co-Director/Choreographer James Rocco taught tap classes to many of the younger cast members throughout the summer and fall, a contribution manifested in an uncommon gusto and precision in the kids’ dance scenes.

Lest one worry about a favorite scene being cut, an entirely unscientific audience poll found no one wanting, with iconic scenes involving tongues & flagpoles, bunny suits, and novelty lamps faithfully transported and adapted with the special touches that only musical theater delivers. Lest this seem boring and familiar, the flagpole scene is enhanced by a despondent mother, an overeager fireman with an axe, and a few other voices joined in one of the funniest musical numbers in the show–a multipart ensemble piece spiced with Flick (Joshua Feldman)’s frantic and enunciatingly incapacitated contributions and dramatic lighting.

Much comedy is had throughout the film at the expense of protagonist Ralphie (Jake Goodman) and his brother Randy (James Ciccarelle), both of whom show strong professional promise. Many of Ralphie’s efforts are foiled by his teacher Miss Shields (played with gusto by the engaging Erin Schwab), a relationship that is turned upside-down to comedic effect in several fantasy scenes. The brothers’ parents (Billie Wildrick as Mother and Dieter Bierbrauer as The Old Man) are not endowed with the same standout songs that the younger members of the ensemble and Miss Shields receive, but are sketched with some depth and have songs that are pretty, funny, and engaging in the moment. Composer-lyricists Benj Pasek and Justin Paul save their best material for the kids, which is rather fitting–had the parents’ various problems and concerns accumulated more worries, the balance of the story would have shifted away from the humor of Ralphie’s self-centered narrative and his pursuit of the elusive Red Ryder BB gun.

This is a show that is for an audience of all ages. Adults will most likely enjoy the humorous commentary from the Narrator/Jean Shepherd (Gary Briggle) a little more, but the script by Joseph Robinette is laced with jokes and situational comedy that plays well at all ages. The choreography by James Rocco and Sharon Halley shines, the house set designed by J. Branson and built by Penumbra Theatre is a nice play on a book cutaway, and the miking excellent–several touring shows that will not be mentioned could benefit from listening more to the Ordway’s sound engineers, who were in top form as they managed the wide variety of voices and voice types on stage. It’s a polished, campy, and charming show, whether or not you’ve seen the movie–and despite a network television tradition of 24-hour broadcasts, many of the audience members have not.