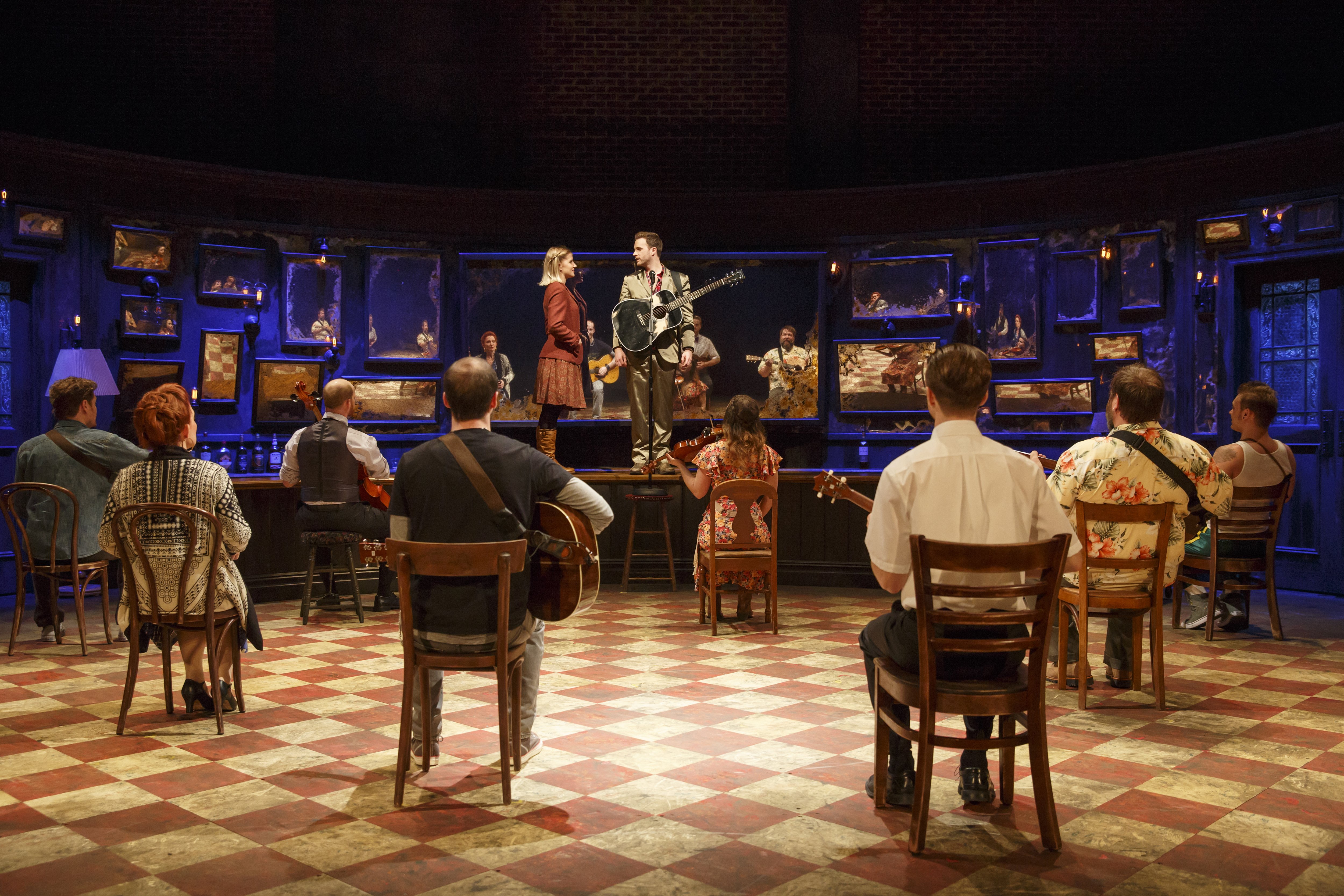 My grandpa always says, “If you’re ten minutes early, you’re late.” I’m more of the school of thought that if you’re exactly on time, you’re using your time efficiently. In the case of Once, do as my grandpa does and be earlier than early—so early that you have to wait for the house doors to open. Because when the doors do open, you’ll find that you’re invited to mosey around onstage for a beer at the cash bar and a pre-show concert from the cast members. One of my favorite nights in Ireland when I went last October was the live music at The Celt pub in Dublin. The jam session that transitioned seamlessly into Once on Tuesday, April 1 at the Orpheum Theatre made me feel like I was back in the Emerald Isle.

The musical Once is based on the 2007 independent film by the same title. The basic plot is the same—Girl meets Guy singing and playing his guitar on Grafton Street in Dublin. Guy fixes Girl’s hoover. Guy learns that Girl plays piano. Guy and Girl sing a song together. Girl and Guy get a loan from the bank for a studio session to record an album. And while the ending is ultimately the same (I won’t spoil it here), the musical takes some liberties regarding Girl and Guy’s relationship that were more subtle in the film (if non-existent).

It’s hard to not draw a comparison between the musical’s Girl (Dani de Waal) and Guy (Stuart Ward) and the originals Glen Hansard and Markéta Irglová, whose chemistry in the film goes unmatched on stage. Hansard and Irglová started a band together and also began dating after the film (as captured in The Swell Season documentary), so there’s a genuine feeling of love between them that’s missing between Ward and de Waal. The script changes for the musical are there, it seems, to create more explicit drama between the pair’s unconventional love story and elsewhere among the supporting characters. The script puts a goofy spin on the tale, which proves to be distracting more than anything. When Girl tells Guy about her dad, a violinist who killed himself when he developed arthritis and couldn’t play anymore, it evoked a laugh from the audience because of de Waal’s quirky delivery. The comic relief does manage to work in a couple places though, like Ward’s rendition of “Broken Hearted Hoover Fixer Sucker Guy” in which he manages to set him apart from Hansard, who’s a hard act to imitate.

The musical may not have gotten the story just right, but I can’t say the same for the music. The amount of talent on stage is incredible. Each character plays at least one instrument (no need for a pit orchestra!) and throw themselves into an all-out musical interlude to transition between scenes. Watching Erica Swindell, Claire Wellin and Benjamin Magnuson shred horse hair on their bows while playing their violins and cello (respectively) makes it hard to sit still in your seat. And Raymond Bokhour’s solo on the mandolin is a beautiful way to launch into the Irish musical. These are the kind of enhancements that I hope for from a musical based on a musical. Once the musical is able to, in this way, branch off from the success of Once the film rather than simply mimic it.