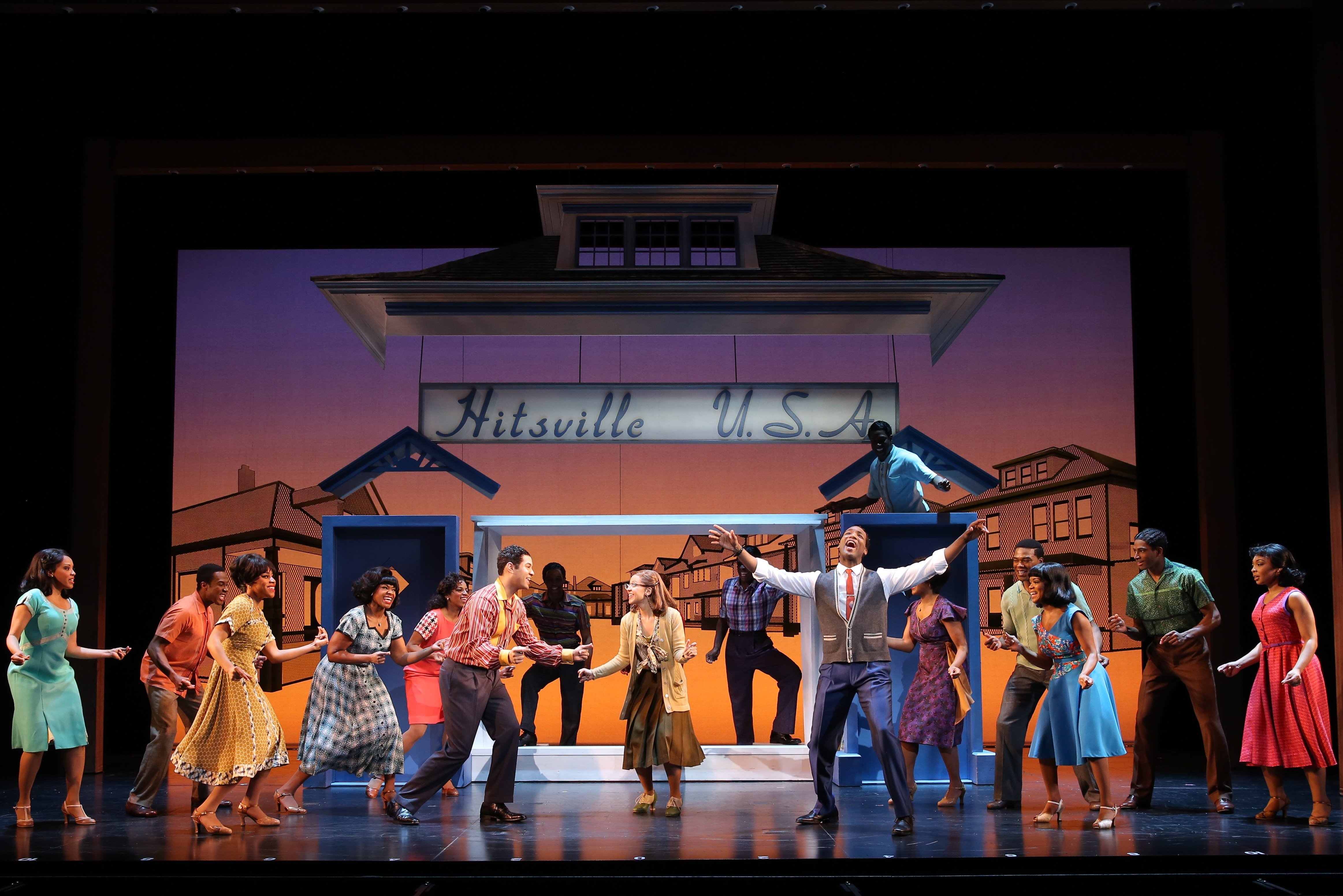 Motown the Musical is playing, joyously, at Hennepin Theatre Trust’s Orpheum Theatre through December 28th, 2014. Get yourself a holiday gift and go get a ticket. Based on Motown founder, Berry Gordy Jr.’s (sic), book “To Be Loved,” the musical celebrates Gordy’s talents as a writer, producer, entrepreneur, also his legacy and character while telling the story about the music and stars created at “Hitsville U.S.A.”

Starting out with the infamous “dueling” between The Four Tops and The Temptations, the show never stops moving as a fleury of sound, light, and talent brighten the stage. You hear Smokey Robinson, Martha and the Vandellas, Junior Walker and the Allstars, Rick James, Diana Ross and the Supremes, Stevie Wonder and more …. many more. Almost every performance is spot-on in its tribute to the ‘real deal’. Not-to-be-missed highlights include anything Michael Jackson (as a young boy) played by Reed L. Shannon, The Jackson 5 (Lynorris Evans, Robert Hartwell, Marcus Paul James, Rashad Naylor), or Marvin Gaye, played by Jarran Muse. Most performers play multiple roles, reinforcing the vast array of talent on stage.

There are a few pitch-perfect segues between scripted and dance scenes including when Gordy Jr. asks his family for an $800 loan, which grooves into “Money, That’s What I Want”), a love scene between Gordy Jr. and Ross, which evolves into “You’re All I Need to Get By” and a poignant “What’s Going On?” after word breaks about the Martin Luther King Jr. assassination.

There’s also an interesting twist to the story line when the audience for Motown the Musical becomes a live audience for Diana Ross’s 1970 Las Vegas debut as a solo artist. As my friend Dawn noted, it made you feel like you were “there” vs. just watching “here.” A nice touch, we thought.

The production is 100 percent Broadway, sparing nothing in its cast, costumes, live orchestra, lighting and sound. The 2 hour and 40 minute production, on a national tour, includes over 60 Motown hits (arranged and orchestrated to resemble the original Motown recordings) and enlists 33 actors, 15 crew members, 10 musicians and 3 stage managers. A local orchestra plays with the traveling musicians at each stop.

Costuming by Esosa is superb, capturing decades with perfect polyesters and chiffons including Diana Ross’s extraordinary ’70s dresses and The Jackson Five’s amazing striped pants. The choreography by Patricia Wilcox and Warren Adams is completely in-step with the original performances (I remember! I never missed an opportunity to see the Jackson 5 on TV, and certainly never missed the Jackson 5 cartoon on Saturday mornings in 1971 and ’72). The orchestration by Ethan Popp was brilliant–moving the audience seamlessly between scenes. Overall the staging was helpful to the performance, adding psychedelic video and vintage news-reel footage to minimal sets. If there was anything to be a bit puzzled by, it was the rather austere cross beams used as background “frames” that were heavy and awkward looking.

I couldn’t do the content of the story justice in this brief review … it covers influential moments ranging from Gordy Jr.’s original inspiration of seeing Joe Louis fight (and win) in the late 1930s to his receiving an $800 loan from his family in 1959 to Motown’s 25th Anniversary Special in 1983. Since it is based on an autobiography, it does lean towards portraying Gordy Jr. as an extremely benevolent and understanding guy. And being a musical, there are those too brief conversational exchanges between characters that seem forced or a bit awkward as the stage gives way to the next big dance moment. I admire that the show gives more than a nod to what Motown represented outside of its artists: social change, a place to experiment and explore creativity, a launch pad for the talent in Detroit, a culture-changer in the music industry and a place where great music mattered first.

The audience left the theater moving and dare-I-say grooving? No, but moving! And being grateful, so grateful, to those who dedicated decades of their lives creating the Motown sound and spreading its momentum. (There is not enough space to pay tribute to the myriad of behind-the-scenes women–from sisters to talent managers–who helped Gordy Jr. along the way.) I can’t imagine a world without those songs, those voices, that history … and I sure hope there are more Motowns out there yet to be discovered.