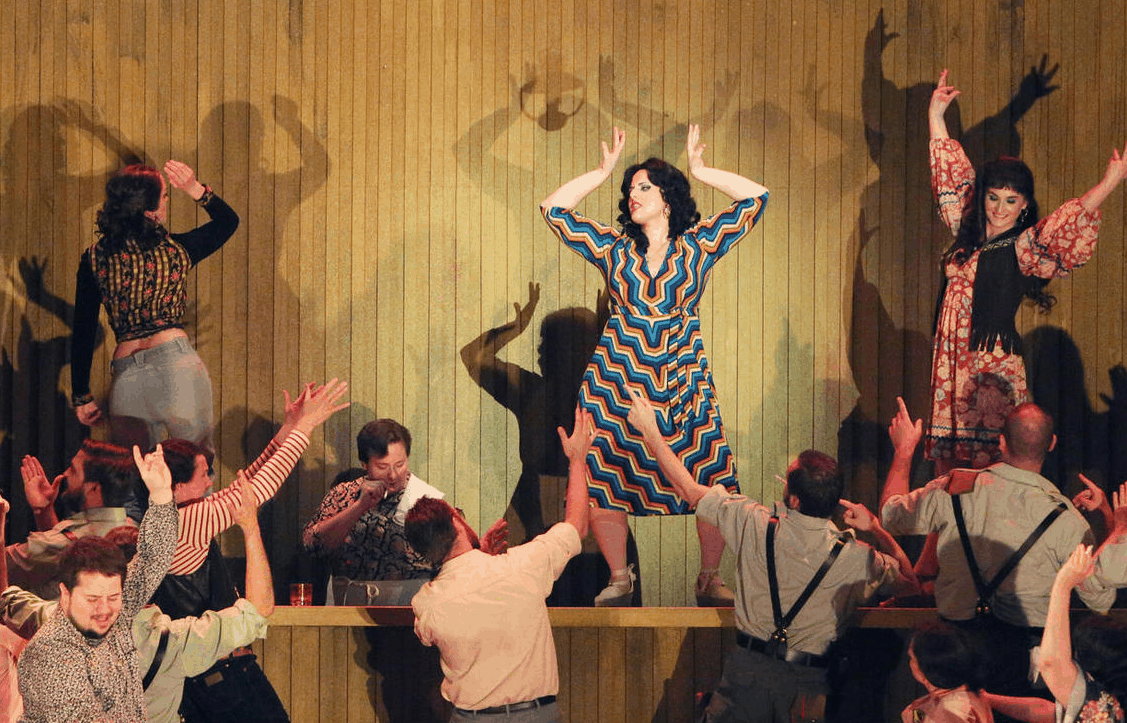 The opera Carmen needs little introduction, but much can be said about how Minnesota Opera’s current production does things well. This classic femme fatale story is presented in Spain in the 1970s, when the Sexual Revolution first began to erode the edges of a conservative Catholicism previously enforced – sometimes brutally – by the repressive fascist regime of Generalissimo Franco. (The modern stereotype of sleazy Spanish men comes from just after this period.) This decision by director Michael Cavanagh heightens many tensions within the source material, and is a splendid excuse for a retrofabulous costume excursion. The music may be the same as normal, but the updated setting makes the characters much more relatable and heightens the already elevated emotional stakes.

Note: This review discusses the Vargas cast of MN Opera’s Carmen, performing May 8 and 9; Check back later for our review of the Sourouzian cast, performing May 7 and 10.

One of the ways that these changes manifest is by emphasizing the agency exercised by the female principles. Carmen (former MN Opera Resident Artist Victoria Vargas, making a welcome return to the Ordway) and her gal pals Frasquita (Siena Forest) and Mercédès (Bergen Baker) become the dominant members of the smugglers’ quintet, and, in Heidi Spesard-Noble’s choreography, drive many of the plot elements. Don José (an excellent Cooper Nolan)’s obsession with Carmen lands in an even darker shadow than normal, with his repeated refusals to take no for an answer coming across as a combination of entitlement and imposed social values. That these beats resonated well with the audience was evidenced by frequent gasps and applause at the reviewed performance.

For opera fans, any performance review of Carmen must answer a few questions, to whit:

Through intent or happenstance, casting Shannon Prickett (as Don José’s initial love interest, Micaëla) opposite Victoria Vargas’s Carmen works very well, with their similar complexions and facial features putting an extra twist on that love triangle. Carmen’s partners in crime, played by Siena Forest and Bergen Baker, are frequently eye-catching, ear-catching, and engaging (the trio’s choreography is also excitingly eyebrow-raising). The orchestra at the reviewed performance was tightly led by Aaron Breid, who injected an extra bounce into several scenes to propel the dancing along. Jessica Jahn’s period costumes are eye-catching and attractive, while the stark Modernist surfaces of Erhard Rom’s offset well the onstage heat. The final stabbing scene, set against a backdrop of crowds at the back of a stadium with flower petals raining down, is an especially arresting image to end the evening.