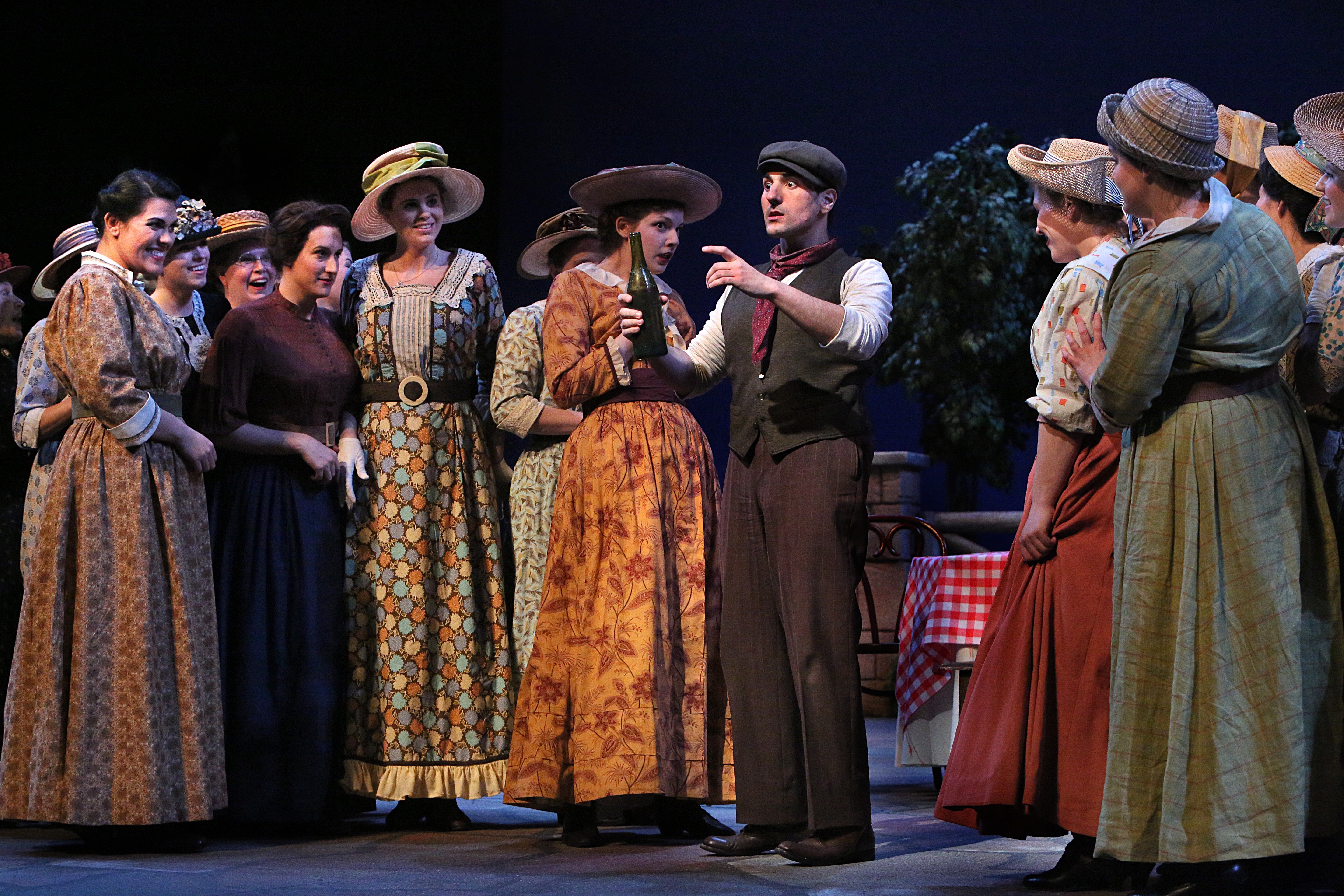 Nemorino (Leonardo Capalbo) discovers that a love potion (and becoming a millionaire) makes him irresistible to women.

Classical music audiences are not as loud as they used to be. Eighteenth-century opera patrons could eat, drink, and converse during a performance; through much of the 19th century, many operagoers treated the opera as a participatory event, shouting encouragement and boos, calling for encores, and stopping performances with applause. The present culture of silence in the concert hall and opera house is largely a product of the last century or so. It was in many ways a blast from the past on Saturday when Minnesota Opera’s performance of The Elixir of Love paused due to riotous applause.

More than one opera performance has charged on in spite of applause, drowning out clapping in the conductor’s drive to create a seamless musical and dramatic experience. Leonardo Vordoni shrewdly did not try this and waited out the applause before continuing, and a good thing, too – the audience would have won that battle. The occasion for this outburst was tenor Leonardo Capalbo’s divine performance of “Una furtiva lagrima” in the second act, which had audience members gripping their chairs tightly and melting to the lilts of his smooth, golden voice. As the last pregnant notes of “Si può morir d’amor (“I could die of love”) faded into the silence of the hall, breaths caught – and then the silence was drowned in a storm of cheers, whistles, and applause.

There is much to recommend in this production of Elixir of Love, a classic comedic opera by Gaetano Donizetti. The cast is sharp to watch, sparkles vocally, and armed with beautiful and often very humorous music to sing. Capalbo shines as the lovesick Nemorino, and his castmates do more than hold their own. Adina (soprano Nicole Cabell) is equally dazzling to watch and hear; watching Cabell move onstage, it is no surprise that her character has enraptured Nemorino and Belcore (baritone David Pershall). As the fast-talking snake oil salesman Doctor Dulcamara, baritone Andrew Wilkowske is a ball of vocal and physical energy. Although her character’s moments in the spotlight were shorter, soprano Shannon Prickett was memorable as Gianetta.

Helena Binder’s stage direction is interesting, varied, and lively, frequently kicking into high gear to match and enhance the liveliness of the music. One of the opera’s funniest scenes sets a mob of village women after Nemorino, a carefully choreographed piece of chaos with many small visual gems. One eyebrow-raising oversight has a chorus of male villagers singing about their sorrow of being deployed for military duty and away from their loved ones – eyebrow-raising since only four characters ever appear onstage and costumed as soldiers. While the decision to have the full male chorus sing this part is musically understandable, it is dramatically inconsistent and distracting before it passes. Another such decision left Dulcamara’s steamer trunk onstage for most of the opera, in the town square – a convenient place to sit, to be sure, but somewhat odd. These were slight distractions amidst the pleasant, rustic backdrop of Marcus Dillard’s set.

The Elixir of Love is a light-hearted, humorous musical ride laced with excellent music and even better performances. Catch it before Doctor Dulcamara skips town!