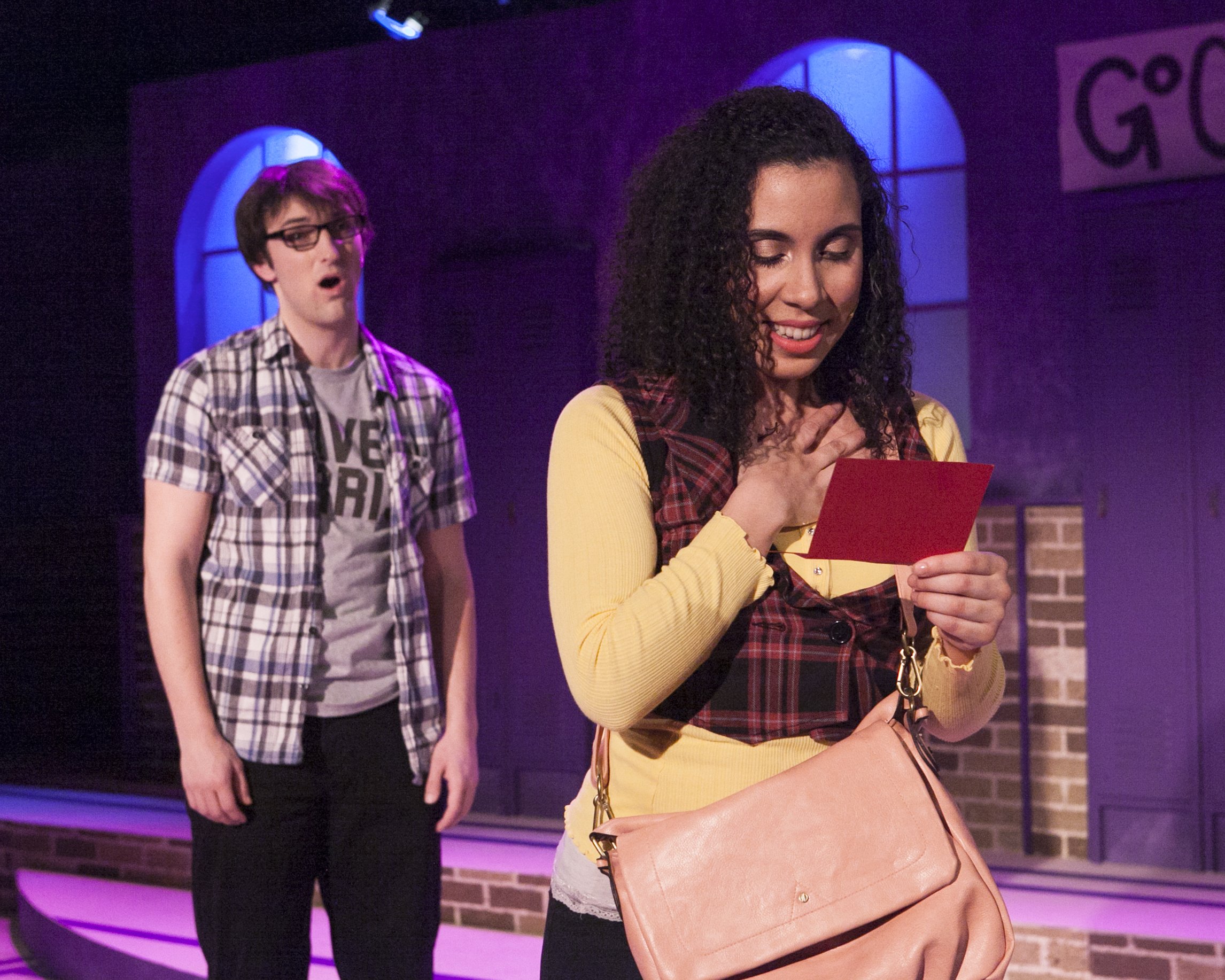 Calvin Berger is a musical update of the story of Cyrano de Bergerac. That’s a big nose to fill, but the production now playing at the New Century Theatre is smartly done. The music and script are fun, funny, and enough of their own animal so as to not invite too many comparisons with the wonderful poetry of Edmond Rostand’s classic play. As Minneapolis Musical Theatre & Hennepin Theatre Trust collaborations go, it’s also a story that fits particularly well with the space of the New Century Theatre.

This version of Cyrano strips down the essentials to just four characters: Calvin (the Cyrano analog), Rosanna (Roxanne by another name; Calvin’s object of affection, but distinctly not his cousin), Matt (the Christian analog), and Bret (Calvin’s sort-of-maybe-not-platonic-it’s-complicated female best friend, a character without a straight analog in the source play). Instead of 17th-century France, this story unfolds in the setting of a present-day high school, with cell phone use, text messaging, and Bluetooth headsets factoring in. Matt (Logan Greene) is a handsome transfer student who catches Rosanna (Emily Madigan)’s eye, leading both to enlist Calvin (Gregory Adam)’s help – who in turn enlists the begrudging aid of Bret (Kecia Beth Rehkamp), who secretly has the hots for Calvin. Sound confusing? Don’t worry, the plotlines get deliciously complicated in ways that seem entirely appropriate for high school, but the tangle never becomes obtuse.

Calvin Berger is the work of Barry Wyner, whose pen produced the book, lyrics, and music. The script is smart, but the first few songs are more passable than stellar, and too restrained; it takes about 15 minutes for the show to really hit its stride. When the cast sings with full voice, especially in the duets and quartets, the sound is quite stellar. The placement of the instrumentalists – often not musically ideal at the New Century – finds a happier medium than most, with the band hidden behind and attenuated by the set backdrop. If the vocal monitors went down a little and the cast sang out a little more, it would be perfect for the dryer acoustic.

Calvin is the eponymous star, but Rosanna attracts plenty of attention of her own. Emily Madigan appeared prominently on area stages last year in several supporting roles, and in a more featured capacity in the Fringe show Failure: A Love Story. Here she gets more of spotlight, especially in the vocal department, and does not disappoint. That isn’t to say that Gregory Adam doesn’t shine ­– he makes a wonderful nerd, and appropriately captures the humility and loss when matters come to a head – but the directing and acting make it clear why Calvin has been neglected his best friend Bret.

Not many adaptations of Rostand’s play have tinkered greatly with the ending, but Wyner does. The result is plausible, appropriate, and makes hay with several of the show’s running jokes. Christan/Matt is greatly beefed up as a character (read that both ways), and has some great duets with Calvin, including the hilarious and double meaning-laced “We’re the Man!” Kecia Beth Rehkamp isn’t given quite as much to work with musically, but delivers a good number of well-timed zingers to mix things up. Throw in some clever lyrics, smooth direction by Joshua James Campbell and Christian Unser, and that’s a high school soap opera that blows the pants and dialogue of Bring It On: The Musical out of the water.