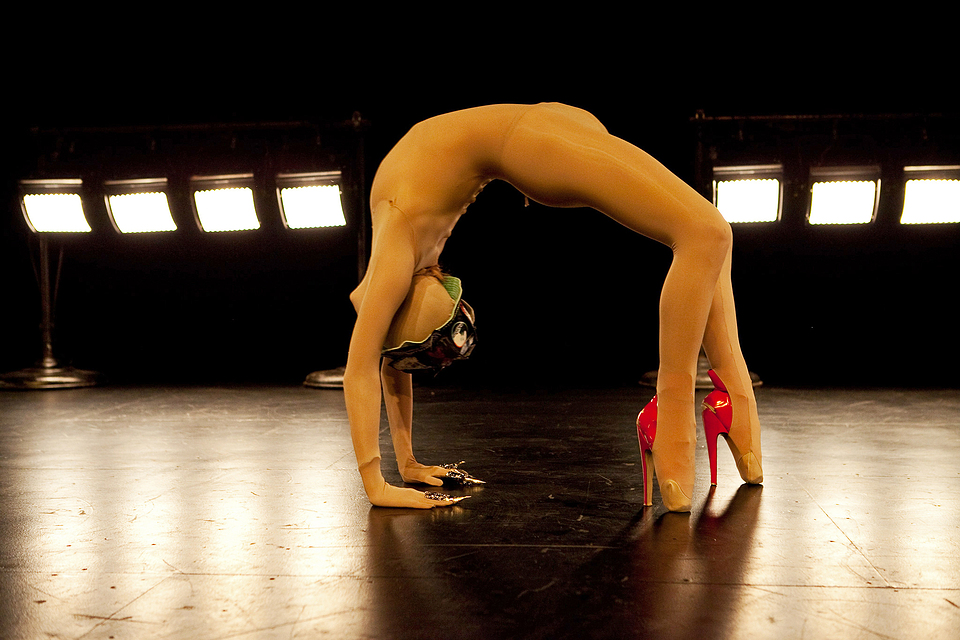 “It’s amazing that three naked people can be so boring,” said my companion as we walked out of (M)imosa/Twenty Looks or Paris is Burning at the Judson Church (M) at the Walker Art Center on January 24.

I couldn’t disagree, but noted, “Well, I don’t know much about voguing, I’ve never seen Paris is Burning, and I couldn’t tell you what the Judson Church is. So I guess I need to do some research.”

Voguing is a style of dance, inspired by the poses of models in fashion magazines like Vogue, that came out of New York’s underground queer subculture in the 80s. You might have seen it in that Madonna video, or in the 1990 documentary Paris is Burning. The Judson Church is a Greenwich Village house of worship where, from 1962 to 1964, a group of performers did pathbreaking work in the development of postmodern dance.

Okay, now on to the program note.

“(M)imosa is a choreographic collaboration between Cécilia Bengolea, François Chaignaud, Marlene Monteiro Freitas and Trajal Harrell. The work is the (M)edium version of Harrell’s Twenty Looks or Paris is Burning at the Judson Church. The series revolves around the proposition ‘What would have happened in 1963 if someone from the voguing ball scene in Harlem had come downtown to perform alongside the early postmoderns at Judson Church?’”

I establish this methodically by way of establishing that much about the context, ideas, and mood of (M)imosa is beyond my experience. I could appreciate many of the themes, and certainly the technical skill and artistic confidence of the sometimes-remarkable dance on display, but this work comes from and was inspired by worlds that are largely foreign to me.

What I experienced was a performance with a couple of remarkable moments very early on, then long stretches of dance and monologue that were paced so sluggishly as to feel indulgent. That might be very true to the feeling of the original Judson Church performances, but those were for insiders in a scene: people who knew the vocabulary, knew the people, were probably passing joints and flasks, and could get up to go to the bathroom. For an audience stuck to their seats for two-plus hours in the McGuire Theater, (M)imosa often seems excruciatingly tedious.

In this incarnation of the piece, four performers alternate turns in the bright glow of lights bolted to waist-high barres forming an onstage horseshoe. They dance, they tell stories, they sing, they do stand-up. Themes of identity, sexuality, and personal and social history emerge and intertwine—but that makes the show sound more compelling than it is. An example is the concluding monologue, a comic disquisition on the ideas of “real” and “fake” that is well-delivered and makes its point, but would have been more effective if it hadn’t been quite so lengthy and languid, and if it wasn’t the fourth of four swan songs performed at the end of an evening when all the swans have already had many songs to sing.

The whole affair feels pompous and inflated, when it might have felt fun, daring, and provocative if it had been more tightly edited and less ambiguously structured. Reference is made to the drag shows at the Gay 90’s; this is a very pointedly different sort of drag show, but the queens at the 90’s might have a few useful tips for this avant-garde troupe regarding when to get on stage and when to get the hell off.

Read Jay Gabler’s reviews of the earlier performances in the 2013 Out There series: Rude Mechs’ The Method Gun and She She Pop’s Testament.