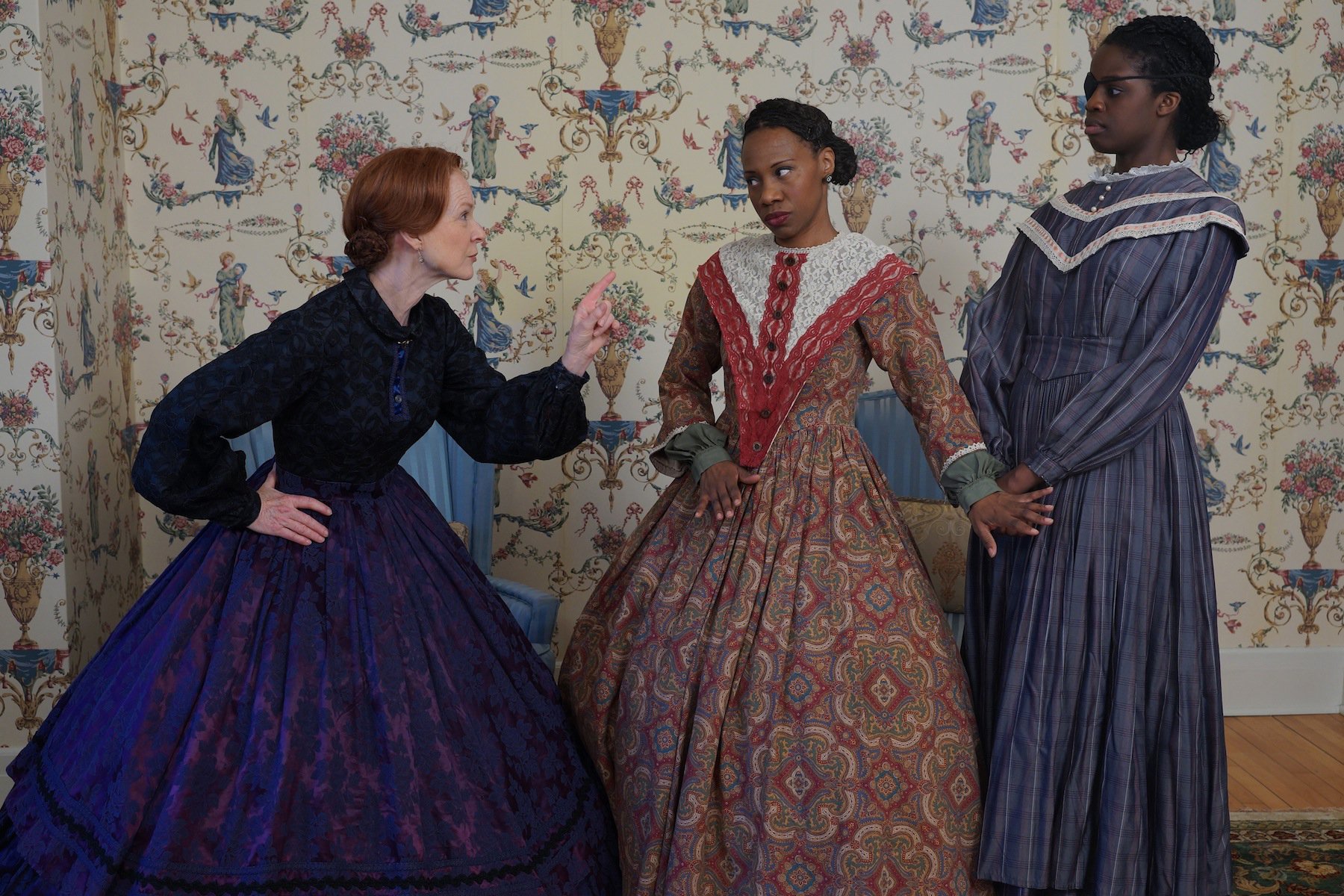 The complicated relationship between the First Lady of one of the most important Presidents of the United States and a former slave and dressmaker is the fascinating premise of Park Square Theatre’s production of Tazewell Thompson’s play Mary T. & Lizzy K. Richard Cook directs an enthralling version of this unlikely duo, which emphasizes the rich poetry and imagery of the play.

The closeness between Mary Todd Lincoln and her dressmaker, Elizabeth Keckly, seems unlikely on the surface. Their often codependent relationship becomes understandable when Mary’s mental illness and angry outbursts distance her from the women of Washington D.C.’s elite. The two women are very different: Mary grew up in a well-to-do Illinois family while Elizabeth was born a slave but because of her sewing talents, was able to buy her own freedom. Both women, however, share the bond of motherhood and loss. Mary had four sons, two of whom had died from illness prior to the time of the play, while Elizabeth had one son who died as a soldier in the Civil War fighting for the Union. Although Mary, through both her race and social position, ultimately holds the upper hand, Elizabeth asserts herself during Mary’s tantrums.

Despite their closeness, their friendship ends bitterly. Elizabeth was never paid for the dozens of dresses she made for Mary, who had wild spending habits that left in heavy debt by the time of Lincoln’s assassination. Elizabeth, in an effort to make some needed money, write a tell-all book about her years in the White House, leaving Mary bitter and betrayed.  Both women ultimately died impoverished.

The play covers two days in the lives of these women. The first is a fictional reunion during Mary’s short stay in an asylum. Mary still has hard feelings about the book that Elizabeth wrote, and Elizabeth is still angry about never being paid. The play then shifts to the day in the White House when Elizabeth is fitting Mary for a new dress to go to Ford’s Theatre with Lincoln that fateful night. That day is played out twice, once from Mary’s viewpoint and the second time from Elizabeth’s.

The play is overflowing with brilliant acting. Linda Kelsey has the difficult task of portraying Mary who was a vain and often self-centered woman, prone to violent outbursts. In poetic prose, Kelsey describes the drudgery of Mary’s days in the asylum. Kelsey plays Mary with such a touching vulnerability so as to make Mary a sympathetic, sometimes likeable person.  Shá Cage commandingly plays Elizabeth with a no-nonsense attitude who understands that her role in Mary’s life is dependent on how well she can handle Mary without offending her, and she often does it with humor and love. The playwright portrays Elizabeth as a reserved person who is reluctant to talk in detail about her life. As Mary recounts in detail how she felt about her mother’s death, all Elizabeth can say about her mother is that she taught her to sew, was sold as a slave, and died.

To offset Elizabeth’s reserved manner, Thompson has interjected the fictional character of Ivy, Elizabeth’s assistant. Ivy is also a former slave who recounts the horror of losing both her eye and her lover as a slave.  Nike Kadri plays the Caribbean born Ivey with such an innocent and bubbly charm that she can’t help but steal the focus every time she speaks. Stephen D’Ambrose plays an overtaxed Lincoln with a folksy charm that makes you hope the real Lincoln was as affable.

The costumes in this production are a special treat for the audience. Designed by Merrily Murray-Walsh for the world premiere production of this play at the Arena Stage in Washington, D.C., they show an incredible eye for detail concerning the fashions of 19th Century America.

Mary T. &  Lizzy K. is an intense production that I highly recommend catching during its limited run.