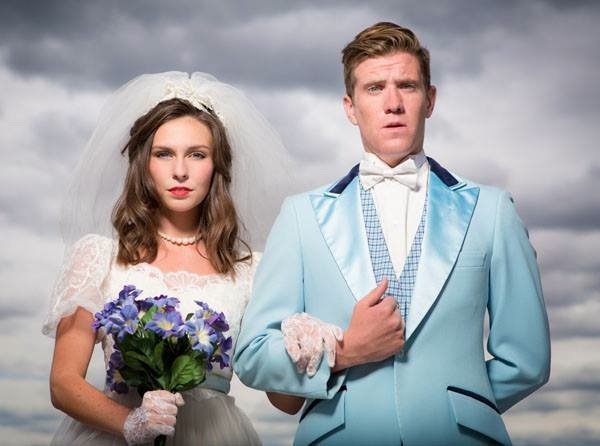 Christopher Durang is fast becoming one of my favorite living playwrights and the appeal of his morbid comedy is amply demonstrated by Theatre in the Round’s current production of Durang’s play The Marriage of Bette and Boo. Director Randy Reyes and a very effective ensemble tackle this complex comedy/tragedy emphasizing the family angst told through a lifetime of family gatherings.

The play begins with the joyful event of Bette and Boo’s wedding nuptials, but it soon becomes a dissection of how the marriage failed along with the despairing lives of their family members. The shows narrator is Matt, the only child of Bette and Boo who survived birth. Bette soon learns after the birth of her first child that due to RH negative blood issues, it is likely all of her other pregnancies will result in stillborns. Despite this knowledge, she repeatedly gets pregnant and the play’s cruelest humor is the running “dead baby” joke. Boo soon reveals himself as a severe alcoholic and he has a father who is not only a alcoholic but a sadistic brut towards his wife Soot—a woman he repeatedly refers to as the “dumbest woman in the world.” His torment is so severe that when Soot becomes deaf she regards it as a “little blessing.”

Things are not much better with Bette’s family. Her sister Joan has children, but a husband who hides out in the bathroom and eventually leaves his family. Her other sister Margaret has a good heart but is fragile, fails in her bid to become a nun, constantly apologizes for everything to everyone and is hospitalized in connection with her breakdowns. There is a brother who is sometimes referred to but is never seen and who also apparently has issues. Bette’s father is a good man but he has suffered a stroke, lost his ability to speak coherently and his inability to be understood is another running gag. Bette’s and Boo’s only surviving child hides from his dysfunctional family by burying himself in his academic studies of novels by Thomas Hardy. Finally, there is the family priest who is far better at imitating a piece of sizzling bacon than he is at being a priest.

Mary Lamb as the tragic Margaret steals virtually every scene she is in. The central roles of Bette and Boo are well played by Pegreen Lamb and Sam Pearson. Pegreen is effective at the difficult role of being the nagging wife without being too irritating to the audience. Pearson brings a certain vulnerability to the role as the alcoholic husband. Other notable performances include Andrew Troth who, as Bette’s stroke-stricken father, creates a strong presence even though he cannot utter one coherent word and Meri Golden as the downtrodden Soot.

Set designer Eli Schlatter has created a unique set which starts out as a wedding cake. But the cake is peeled away to set up the different sets for the family gatherings and symbolically dwindles in size as the play progresses. The only drawback is that the actors’ need to set up each of the numerous scenes in the show slows the pacing of the production. The pacing improves in later scenes as the set grows smaller.

Reyes’ direction suffers in the first half from the slower pacing of the show. A quicker change from scene to scene would have helped the humor and impact. But in the second half of the play, both the pacing and quality of the production really takes off. This play has not been produced very often locally and this production is definitely worth catching.