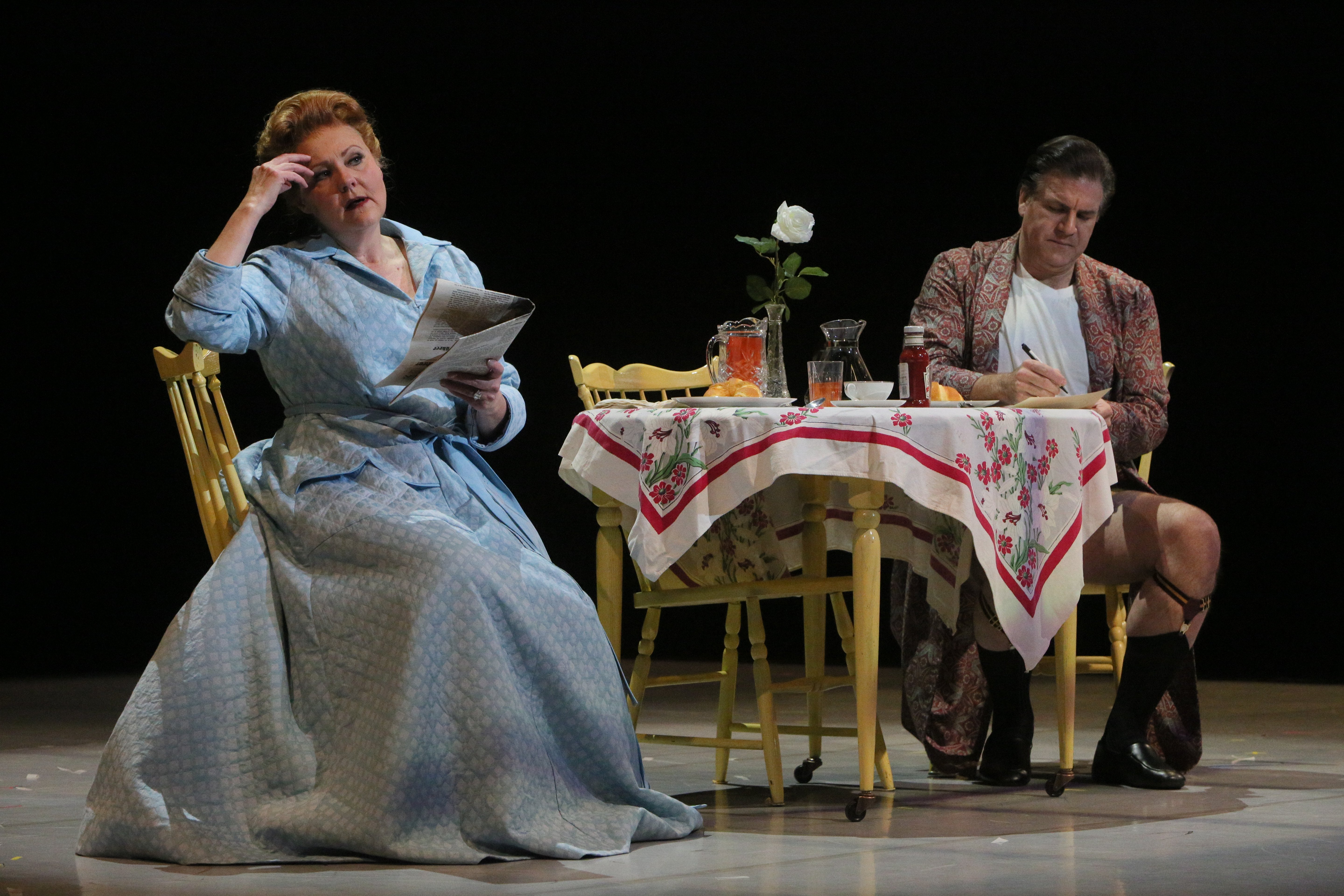 There is much that is not well in the opera world at large, but The Manchurian Candidate is not part of the problem. This new opera by Kevin Puts and Mark Campbell is thrilling, fast-paced, varied, and moving, with a story that excites and music that pulls the audience into a shifting world of paranoia, subterfuge, and love. In an industry where “saving” opera has too often meant protracted labor disputes and aesthetically confusing attempts to shock audiences, Minnesota Opera’s production of The Manchurian Candidate offers a third way forward. It presents a story that resonates with contemporary themes and concerns, populated with interesting and nuanced characters, told through fast-moving music in a presentation enhanced (rather than distracted) by technology. The formula works tremendously well.

The story of this opera is adapted from the 1959 novel of the same name by Richard Condon. This political thriller of a tale has been smartly adapted to the stage by Mark Campbell and fine-tuned through careful development; the result is a complex story that rushes by raising questions but not confusion, filled with characters whose words and interactions hint at long histories without getting lost in too much exposition. No scene feels extraneous, and as events rush to a head there are just enough breadcrumbs to heighten the growing sense of suspense.

The score by Kevin Puts takes a remarkable variety of musical styles and fuses them into a cohesive whole that propels the tightly crafted story forward. The first property is a demonstration of skill; the second, a feat of storytelling and craft that is much rarer. Not many works successfully marry a country barn dance with micropolyphony and post-Romantic melodies, but Puts does more than make it look easy – his score makes this variety have dramatic and aesthetic sense. This poses an impressive stylistic challenge for the conductor, but Michael Christie didn’t miss a beat when rising to the task.

Without giving away too much of the story, The Manchurian Candidate is set in the United States during the opening stages of the Cold War, when the Second Red Scare ran through the country and the likes of Senator Joseph McCarthy stoked fears of the Other infiltrating American society. A group of Korean War POWs return home, only to find themselves troubled by dreams of brainwashing exercises and conflicting memories of events. Soon, it becomes clear that one of their number has been trained as an assassin, to deadly effect.

Much of the story follows Sgt. Raymond Shaw (Matthew Worth), a POW who finds it impossible to escape the political machinations of his mother Eleanor Iselin (Brenda Harris) and his stepfather Senator Johnny Iselin (Daniel Sumegi). Worth carries a great deal of gravitas through the arc of the opera, but Harris’s portrayal of Eleanor is arresting and chilling, commanding attention; if her performance is any indication, Eleanor Iselin is likely to join Lady Macbeth, Norma, Abigaille, and Poppea among the great villainesses of opera. Iselin/Harris’s opposition is so forceful that Shaw’s breaking away to marry his pre-war sweetheart Jocelyn Jordan (Angela Mortellaro) becomes an incredible feat of will rewarded by some beautiful music.

The operational aesthetic of this opera is that of a tense thriller; standalone arias are few and far between compared to the sung exposition, a compositional structure that recalls works like Puccini’s Gianni Schicchi in the way that different types of pieces are used to highlight moments of drama. The late Act I quartet “All you have is fear,” when the major plot strands finally come together to pull at each other with terrible clarity (for the audience, if not the characters) is one such moment. The sweet arioso and duet “The summer before the war,” is another such key moment, a few moments of sheer beauty before the dark clouds roll in. Such moments arise from the larger push of the narrative to propel the story with extra vigor, and Harris’s delivery of her master plan in her aria “Hello, my son” is disturbing and gripping at once.

The Manchurian Candidate is both dramatically and visually stimulating, with an ever-changing sample of vivid 1950s period costumes by Jessica Jahn and a virtual cavalcade of wigs and headpieces recasting the chorus as the action jumps from scene to scene. The set by Robert Brill is visually striking and dramatically important; the suspended screens, combined with video footage in the press conference and convention scenes, strongly heighten the action and spectacle. The finale’s sweep from grandstanding to chaos and terror is riveting in its delivery, with Kevin Newbury’s staging of utter chaos erupting an arresting final image.