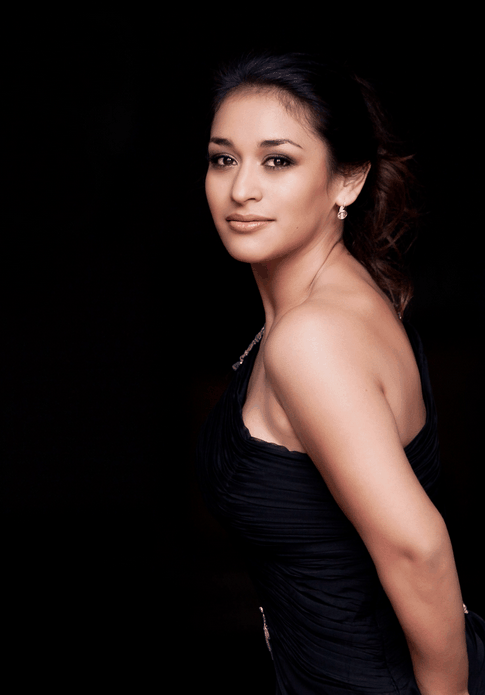 Color-blind casting continues to be an issue in American theater.  In opera, one might argue, without it how are artists of color to work?  After all, there isn’t exactly an over-abundance of roles written with characters of color.  And how many opportunities are there to be cast in a revival of, say, Porgy and Bess or Madame Butterfly?  Members of Skylark Opera’s production of Puccini La Rondine – two performers, who are of color, and the director, who is not, commented on the matter by email.

Cecelia Violetta Lopez sings the role of Magda, who leaves her setup in the lap of luxury as a banker’s mistress, to go looking for love. Lopez’s solo concert credits include Mahler’s Symphony 4 and selections from Canteloube’s Chants d’Auvergne with the Henderson Symphony Orchestra, Rutter’s Mass of the Children with the Southern Nevada Musical Arts Society, Bach’s Magnificat with the University of Nevada – Las Vegas Symphony Orchestra and Rachmaninov’s Vocalise with the UNLV Chamber Orchestra.

“I’ve never experienced a color and/or race issue in my growing career”, she reflects.  “I have been discriminated against in my lifetime, but those instances have been for being Mexican-American and/or female.  Sad, but true.”

Lopez then states, “I think race and opera are completely unrelated to each other. Just because I’m Mexican doesn’t mean I will be cast as the servant in a popular, mainstream opera. I’m not as seasoned as other colleagues, but in my few years of singing professionally, I’ve sung roles like Cio-Cio San (Japanese woman in an Italian opera) Rosalinde (Hungarian countess in a German opera) and Leïla (a Buddhist priestess sung in French).”  She does acknowledge, “ But then again, in contrast to my last statement, there are operas like the new “Mariachi Opera” and “Porgy and Bess” where being of color or of a certain ethnicity helps in being cast for roles in those productions.”

Her feelings is that ultimately, “Opera is for everyone, no matter what your socioeconomic status is, what language you speak, what race you are, where you live, etc. Opera is music; an old art form that everyone should be exposed to.  Whether it’s because you like the science behind the vocal technique, the marriage of the orchestral music with the singers’ melodies, the sets and designs, the history of the piece, live theatre, or because you can relate to the story/libretto being told, there is always a magic that takes place at the opera that everyone should experience at least once in their lives.  This magic is moving. It unites audiences and performers.”  While one would be hard pressed to find impoverished or blue collar folk who can afford the opera, music, inarguably, is a universal art form.

Norman Rankle, an African-American, sings the part of the poet Prunier, says, “I think it would be a disservice to any piece of musical theater not to cast a qualified person based on his or her race. I think the reason that these shows are still around is because of the great music and compelling stories. Regardless of who is performing, those two things remain.”

Ben Krywosz, artistic director at Nautilus Music Theater directs.  He observes, “In addition to theatrical and dramaturgical values, classical European opera has the additional criteria of vocal ability. Music-driven theater is usually more stylized than naturalistic spoken theater, so opera producers have more flexibility in casting. Indeed, except for a few select roles in a handful of classical operas, there is usually little reference to a character’s race. There is nothing in [this opera] to indicate racial characteristics, and the happy accident of our multi-racial cast is easily supported by the social and political milieu in which our production is set.”

Inarguably, the Twin Cities, with its multi-cultural arts market and marked propensity for casting without regard to color, is an ideal showcase for this production. It also includes tenor Won Whi Choi.