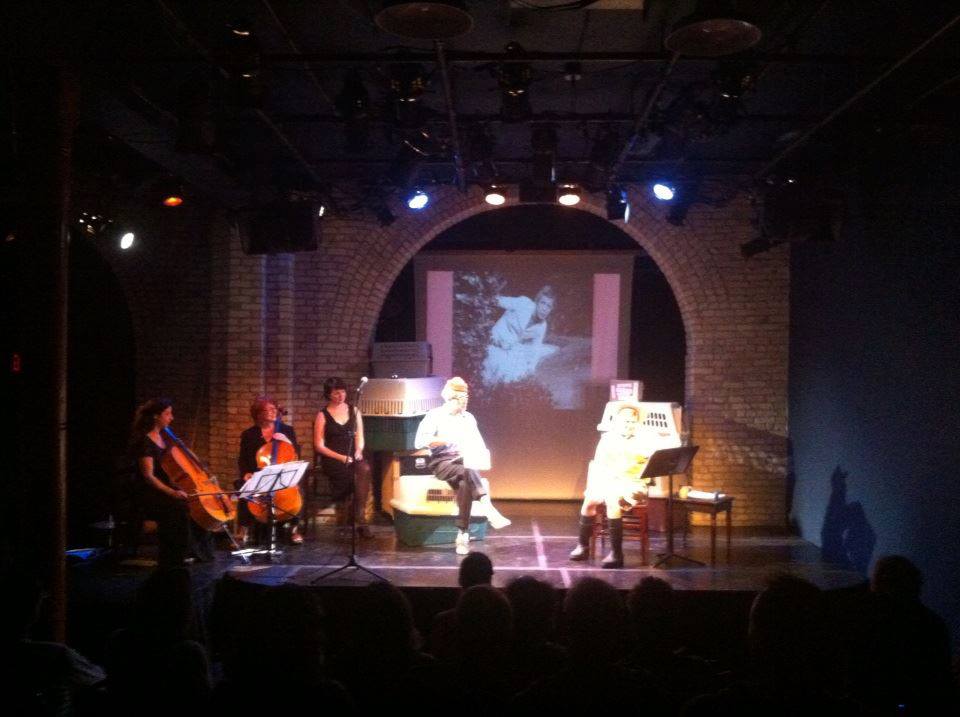 The first time I saw Kevin Kling up close (and personal, for that’s Kling’s nature) he was walking in my neighborhood—turns out it’s his, too—accompanied by an animal, a wiener dog. Actually, he was sauntering, a pace suited to his short-legged friend. When it comes to the human–animal connection, this man speaks from experience. Kling confesses that as a child he thought he was an animal.

“What animal scares you the most?” flashes on the screen, a warm-up to the show. “What animal do you look like?” Now it’s getting personal. “What animal shares your personality?” I’m not telling. (Somedays a barracuda; other days, earthworm.)  Fortunately, no one asked.

The animal in me loved the show. It’s great PR for animals and their gifts to humans, and it’s more than this—it’s about being human.

In Act I, after some witty wordplay, Kling offers a brief history of human-animal connections, the fierceness and fear, the connecting and splitting.  The act culminates in his trademark stories–poignant, tender and illuminating, full of heart and humanity. We hear of the wiener dog with the “can do” attitude and “can’t do” body, and a pony named Zeus who lacks divine immunity from earthly crises. We learn that dogs cure and take us back to a place we once knew, and you can’t lie to a horse—they read you. Reconcile with the animals, urges Kling, who cites a bit of cautionary Anishinabe wisdom: what happens to the wolf, happens to us.

“Do I want to be a dog?” howls Perrin in a musical interlude. Later, “Wild Thing” has the audience howling, as Perrin’s coy, whimsical style captivates all. Ultan and Kinney also shine throughout.

Act II veers off in another direction as Steve Nature (Kling) drinks a potion to become an animal, falls in love with a bear, and is visited by the debonair Jacques Cousteau (Sommers) whose love is the ocean—sorry, ladies. We play a guessing game, and learn of the dangers of the earthworm as the box of worms falls and critters escape. Lots of frivolity and silliness, entertaining though a bit disconnected, and then, Kling’s characteristic depth and insight, as Steve finds self acceptance, realizing he is an animal after all, for he is finally in the moment, no longer living in the future and the past. Aha, animals are role models!

Kevin Kling makes a strong case for the value animals add to our lives, and he does so with charm and freshness.  But you don’t have to love animals to love this piece. Humanimal is a heart-warming and good-humored show, richly-textured, layered and complex, like a multi-colored tapestry you want to explore from all angles. What if we humans understood our continuity with the animal world, in humility owning our creatureliness and learning from our furry and feathered kin? Might we live differently, work harder to preserve the earth, and be less stressed? It’s worth considering.

Kling does not disappoint. In his distinctive, rambling style, Kling honors the audience by opening the door to his own stream of consciousness, revealing just how his mind works in it’s brilliant, associative, and profoundly human and humane flow.

“He gets to the human experience, to the deepest part of us,” said an audience member after the show. Indeed!